HMD’s 2018 flagship Android One, the Nokia 8 Sirocco, is now officially getting Android 9.0 Pie. This is following the recent availability of the source code of various Nokia devices. The Nokia 8 Sirocco isn’t a big hit when it launched in MWC 2018 last year.

But if there is something to talk about the phone, it is its design and the reuse of the “Sirocco” name. The barebones Android One is also one of the many things this phone have. Which, in a way, also limited it to fully utilize its use of edge display (which currently sets just for aesthetic). For the sake of being pleasing to the eyes. However, Android One also has its perks. And it’s in a big way. Android One means, the Nokia 8 Sirocco is eligible for up to two years major OS upgrade, and up to three years for a security patch. 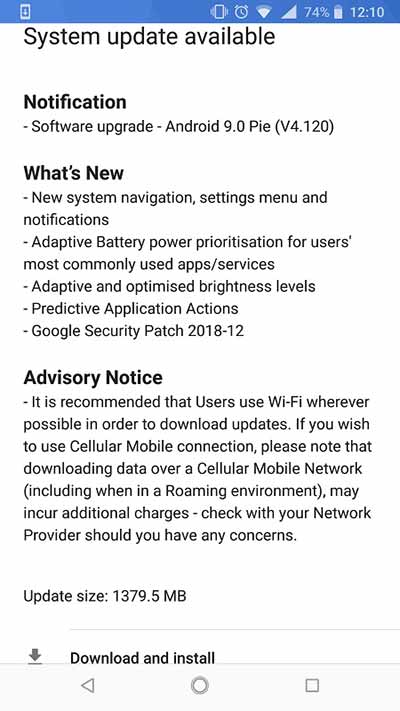 The Nokia 8 Sirocco Android Pie OTA update is huge at 1379.5 MB, given that it is a major OS upgrade and contains the December 2018 security patch. This will also bring in features on the 8 Sirocco like an adaptive battery, adaptive brightness level, and many more. Refer to the screenshot to know more about this new update. To force-check for the update, go to your phone’s ‘Settings‘ > ‘System‘ > ‘System Updates‘ and check for the OTA notification.

The Nokia 8 Sirocco features a 5.5-inch QHD P-OLED display. Unfortunately, it’s in 16:9 aspect ratio. Both the front and the back is wrapped with Corning Gorilla Glass 5. The Snapdragon 835 runs the phone, with Android 8.0 Oreo on its power. There is only one variant for the handset and it’s the 6GB/128GB configuration. For the imaging, the rear has dual camera setup. The regular sensor is 12-megapixel in f/1.8 aperture, while the other is a 13-megapixel sensor with a telephoto lens and f/2.6 aperture. On the front, the Nokia 8 Sirocco has a 5-megapixel camera in f/2.0 aperture. All were ZEISS-branded.