Finally, after religiously seeding multiple beta iterations since last few months, Samsung is now rolling out the Stable Android Pie Update for Galaxy Note 9. The update is making its move in Germany as of now. As the routine goes, the update may soon appear in the Korean, Indian regions and other places in no particular order. This stable system upgrade to v9.0 Pie is knocking in with a new build number N960FXXU2CRLT. Also, to make things more secure on the device, the current upgrade also packs the January 2019 security patch update from Google. 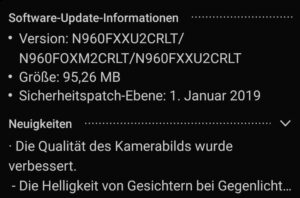 This stable update is a follow up for the users in the beta channel. However, we expect the users on the non-beta end will also get hold of the latest Pie OS. The latest Android Pie Update for Galaxy Note 9 weighs around 95 MB. This indicates that the previous and fourth beta fixed up everything. The current one is just a final and official stable branding for the new operating system.

It seems Samsung is running a bit early than its proposed Pie system update roadmap.  According to the Samsung, Note 9 was supposed to enjoy the Pie treat around mid-February. However, the party took place early. Recently, Galaxy S9 and S9+ received the Android Pie update with the new OneUI. hopefully, if the company keeps this update streak punctual, then older flagships like Galaxy S8/S8+ may get to taste the Pie soon. These devices were lined up for a February release of stable Android Pie.

Although Android Pie Update for Galaxy Note 9 is a stable rollout, it will drop in batches. Depending on your respective region, you will see the notification for a new Pie system upgrade on your phone. In case, you are seeing that you are not getting the update to Pie OS, then try searching for it. Go to device Settings > Software update > tap Download and install. If you see the new N960FXXU2CRLT update then grab it.

Though it’s an update of small size, grab it using a good Wi-Fi connection. This way the carrier will not charge you for data. Also, ensure that the battery charge of your Note 9 is 50% or more before performing the update installation. A low battery will not allow you to install it.

So, watch out for the much awaited stable Android Pie Update for Galaxy Note 9. Do not miss it as the software brings important security patch update as well. Install and enjoy. Do share your firsthand experience of using stable  Android 9.0 Pie on your Note 9.