The Asus Zenfone 5Z is currently one of the best mid-range smartphones and a decent rival to the OnePlus 6. The phone carries a reasonable price tag of $499 only. Users all around the world have bought this smartphone as a result of its affordable price and powerful hardware. In order to comfort its flagship smartphone, Asus always seems to be quick when it comes to the software updates. After the June’s security update, ASUS is rolling out yet another update for Zenfone 5Z, which advances the camera department of the phone with tons of improvements.

The OTA update comes with the new version 80.30.96.80 and weighs 395.65 MB. It brings a couple of new features to the smartphone. One of them is ‘Lift to unlock’, which is an ordinary face unlock feature, seen on many smartphones before. Which means you wouldn’t need to press the power button to wake the phone for unlocking. The new update also includes gesture controls for the phone in order to provide an easier interface. In addition, Asus has also fixed the display flickering issues happening while video recording. 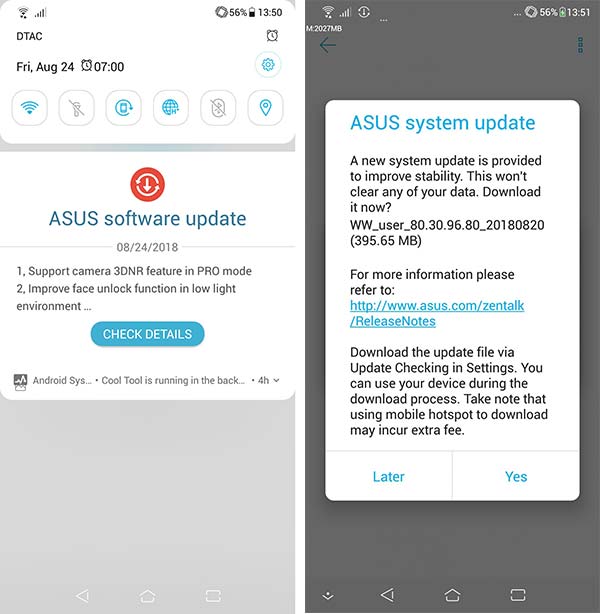 In addition to the software enhancements, the new OTA update comes packed with quite interesting new features for the camera. The new camera features along with some  improvements are as follows:

As described by the company, the rollout started rolling out on 24th August 2018. While the OTA has started reaching out to a bunch of users, it could still take a few days to weeks to make its way to all the users globally. In case you did not receive an automatic update notification, you can force-check the update. To do it, go to Settings → System updates on your phone and tap Check for updates. If the update appears, you can use a Wi-Fi network to download it, in order to save your carrier’s mobile data charges.

While this new Asus Zenfone 5Z update carries a lot of improvements for the camera, there is still no sign of the August 2018 security patches. We are already near the end of this month, and the new September patch is approaching soon. It would be nice if Asus could push security updates on a priority basis.