Google is finally rolling out the latest August 2018 security update for the Mi A1 users. The OTA update weights 474.4 MB and carries the fixes for several vulnerabilities that were discovered in Android OS. We received a tip from one of our readers. According to whom, the OTA notification arrived yesterday, on 21st August.

The new and updated software will change the build number to ‘OPM1.171019.026.V9.6.5.0.ODHMIFE’. The official changelog of the new security update mentions the improvement in device stability and overall performance optimizations.

Unofficially, this new update does a little more than what is mentioned. According to several users who have already installed the update, have confirmed that it fixes the dreaded network fluctuation issue that many users have complained about.

Also, after the July security update, users were facing another major issue. As per the reports on several online sources including Mi.com, the LED light would not blink on upon arrival of messages or phone calls. However, with this new update, the Notification LED issue is now fixed. Unlike the previous month, we hope that the new Xiaomi Mi A1 August 2018 security update would not contain much, if not any bugs. 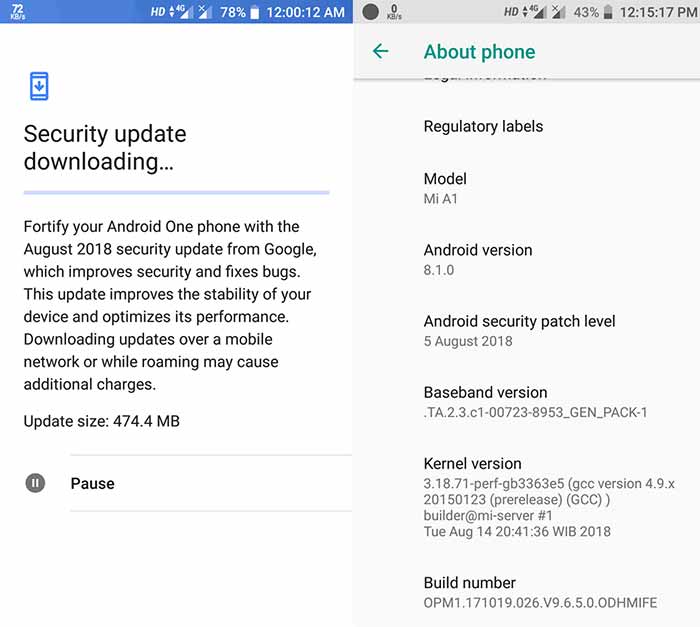 The update, as always, will be incremental and will be available to all the devices slowly. To force-check for the OTA notification, go to Settings -> System -> System update.

Just to remind you, the Mi A1 is one of the most successful phones by Xiaomi and that’s major because it offers Pure Android experience along with a decent hardware at an affordable price. But even though the Mi A1 is a part of the Android One program, it has still failed on several occasions to deliver monthly security updates on a timely basis. We hope that Xiaomi will make up for this, especially with the newly-launched Mi A2.