Google announced the Android P Developer Preview 2 in the I/O event that was held recently. You can now download and install Android P Beta on Oppo R15 Pro.

This year, the tech giant has presented us with a lot of new things related to the Android OS. Of all that, the announcement of the second dev preview of the upcoming Android version was a major one. Not just that, Google for the first time has partnered with some of the major manufacturers and released the Android P Beta for several more devices than just the Pixel phones.

This means that non-Pixel phone owners will get to try and test the next major Android version, even before it is released. Thanks to Project Treble, the Oppo R15 Pro is one of the selected phones that can avail the beta software. The instructions below will help you easily install Android P Beta on Oppo R15 Pro. 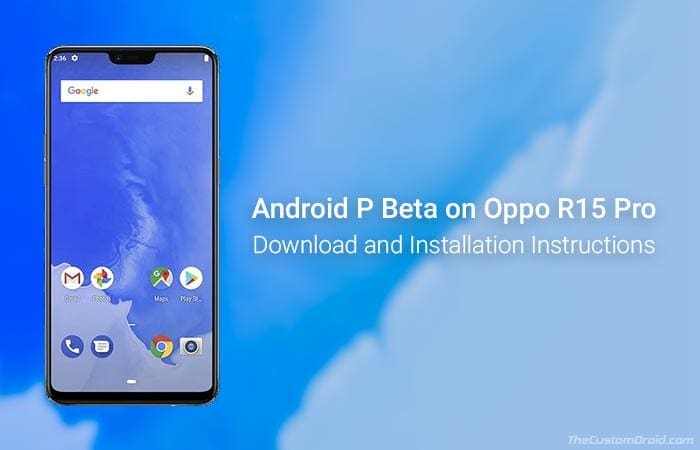 Oppo is an Android manufacturer known for its affordable smartphones. This year, the company announced one of its best constructions as the Oppo R15 Pro. The phone lines in the mid-range price spectrum and offers some decent specs. Starting off with the 6.28-inches fullscreen display, the Oppo R15 Pro comes with the Qualcomm Snapdragon 660 processor with 6GB RAM and 128GB of internal storage. There’s a mix of things that add to the benefits as well as downfalls of the phone. Since the phone ships with Android Oreo, it also supports Google’s Project Treble. That’s the major reason that the Oppo R15 Pro gets access to the Android P Beta program.

Now before you even install Android P Beta on Oppo R15, let us take a quick look at the new features and existing issues.

There is a list of new features that will accompany the new beta software. The major ones include redesigned notifications and Quick Settings, new icons in the settings menu, Adaptive Battery, App Actions and Slices, Enhanced Audio, and more. On more broad terms, the OS has taken a major revamp over Android Oreo. For the complete list of changes and new features, visit the Android Developers Blog.

Since this is a beta software, bugs are expected. Oppo has also listed some known issues with Android P Beta on the Oppo R15 Pro. Below is the list:

Some of these bugs are quite major and could affect the normal functioning of the phone. However, if you are really keen on testing the new features, the install Android P beta on Oppo R15 Pro using the instructions below. Also take a note that if you want to revert back to the commercial ColorOS software in the future, you will need to manually visit the customer service center.

How to Install Android P Beta on Oppo R15 Pro

When your phone boots into the OS, follow the on-screen instructions to set up the device. Once the setup is complete, you shall be able to enjoy all the Android P features on your Oppo device. It is worth noting that the developer preview does not offer any of the ColorOS system features. Also, that there shall be no bug fix releases until the next beta is announced.

The beta software will allow developers to get their apps ready for the upcoming Android OS. Regular users could contribute to the development scene as well, by providing feedback and reporting bugs. So, this was our guide on how to install Android P Beta on Oppo R15 Pro. If you have any questions regarding the procedure mentioned here, then leave a comment below.