With Android 9 Pie source code already available on AOSP, developers are working hard to build ROMs for some of the most popular budget Android devices. You can now download and install Android Pie on Asus Zenfone Max Pro M1 unofficially, using the AOSP Pie ROM.

Google announced Android Pie more than a week ago with all the exciting new features that we all have been eyeballing since the first developer preview released in March. It wasn’t much later when Essential Phone received the official update as well. And in the last few days, OEMs like Huawei and HTC have also announced the list of devices that will get the Android Pie update soon. 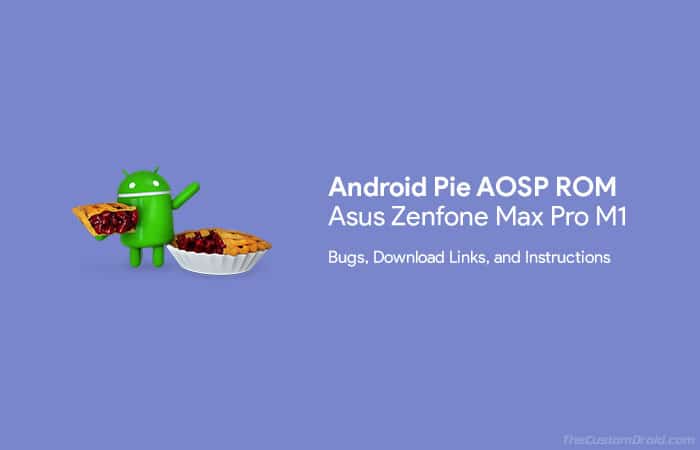 After almost two weeks since the official release of Android Pie, developers over at XDA have started compiling ROMs from the official AOSP source code. We already saw Android 9 Pie port for Redmi Note 4 a few days ago. And, it seems like more devices are being added to the list. As of today, you can now install Android Pie on Asus Zenfone Max Pro M1 using the AOSP Pie ROM.

XDA Senior Member Shivam Kumar Jha has successfully compiled a fresh build for the said device. But unlike the ROM we saw for Note 4, this ROM works slightly differently when it comes to the installation part. The process of installing is very similar to that of the Android Pie semi-GSI port. Which means you will need to manually flash the device with the provided partition images.

Before you get to the actual steps to download and install Android Pie on Asus Zenfone Max Pro M1, let us dive into a bit more details about this ROM.

As far as the stability is concerned, this Android Pie ROM does not contain any major bugs that would affect the daily usage. According to the original XDA thread, the only bugs that you would face is non-functional NFC and permissive SELinux status. Apart from that, all the major device functionality stays intact such as RIL, WiFi, Bluetooth, audio, sensors, and more. As a bonus, the ROM as offers pre-enabled Camera2 API. Which means that you can easily install any Google Camera mod of your choice after flashing this ROM. Another benefit of using this ROM is that it brings August 2018 security patches, which are the latest as of today. 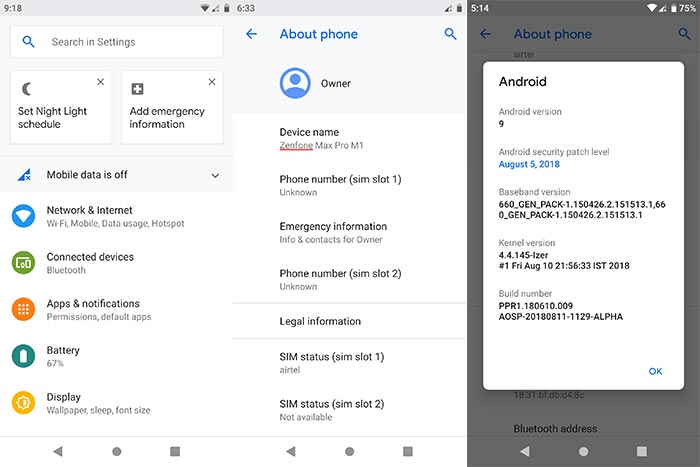 So, now that you’re familiar with the ROM, let us hop onto the installation process. At this moment, there’s no stable Pie-based vendor for the device, which means you will need to perform a few additional steps to install Oreo vendor too.

Note that a successive reboot is very important before you flash the GApps ZIP. Or else, the setup wizard will indefinitely force-close.

Since NFC doesn’t work in this ROM, you can even flash NFC disabler ZIP file via TWRP to completely remove it from the device settings. Also, in-call audio might not work at the beginning, however, a simple reboot solves that problem. Other than that, everything in this port works pretty well.

So, you have just been able to download and install Android Pie on Asus Zenfone Max Pro M1 unofficially, using the AOSP Pie ROM. Our appreciation goes to XDA Senior Member Shivam Kumar Jha for his hard work on this ROM. If you have any questions regarding the ROM or the procedure mentioned here, please feel free to leave a comment below.