Android Pie already knocking the doors for several smartphones with the OnePlus 6 to be the latest. On the other hand, several manufacturers are still focusing on releasing Android Oreo for some of their devices. Today, it is LG, who is pushing a new update for the T-Mobile LG G5 users in the U.S. It is worth noting that despite the new Software Upgrade Center, the OEM has still not managed to deliver timely updates to its supported devices. The LG G5 was released in 2016 and came with Android Marshmallow out-of-the-box. It was then in November 2016 when Nougat made its way to the device. Now, after almost two years of patience, users can finally enjoy Android Oreo on T-Mobile LG G5.

As always, the update is rolling out over-the-air and shall reach out to the all the users in the coming days. But, if you don’t have a spot for waiting, you can manually install Android Oreo update on T-Mobile LG G5 (H830) using LG UP + Uppercut tool or TWRP recovery. Instructions for both the methods have been laid down in this post. 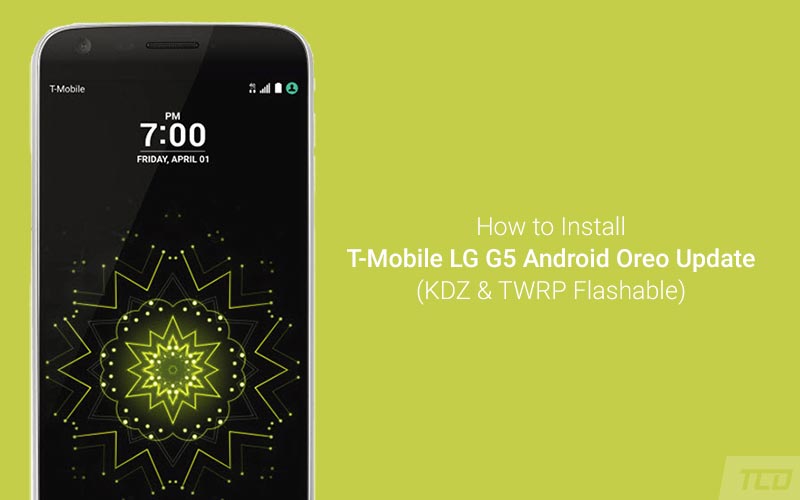 Earlier this month, the manufacturer started rolling out Android Oreo for the G5 users in South Korea. T-Mobile, on the other hand, has yet to make an official announcement regarding the same. However, XDA recognizer contributor/developer autoprime was able to capture the official T-Mobile LG G5 Oreo KDZ and also managed to create a TWRP flashable package for those with root.

Before you head to the instructions to install T-Mobile LG G5 Android Oreo update, let us take a quick look at the changes and new features that will accompany.

Since this new update is based on Android Oreo, it carries all the standard features including Picture-in-Picture mode, Smart Text Selection, Autofill Framework, and more. The update also focuses on bringing a faster software experience with improved performance. To add, the new 30c firmware also brings August 2018 security patches, which is good, but still a slight disappointment since many other Android phones are now getting the September patches.

It would be wise to check for the OTA notification before you install T-Mobile LG G5 Android Oreo update using this tutorial. To do so, go to the ‘Settings’ -> ‘General’ -> ‘About phone’ -> ‘Software info’.

The new T-Mobile LG G5 Oreo firmware (30c) comes with Anti-Rollback Version 01. Which means you will not be able to downgrade to an older firmware with ARB version any lower than 01.

As we mentioned earlier, autoprime has provided links for both the official Oreo KDZ and a TWRP flashable package. If you are sure that you just want to stay stock and upgrade, then follow Method 1. Users who want to roll down to the root lane should opt for Method 2.

The process will begin and you shall be able to see the progress bar initializing. The complete flashing process could take a few minutes, so give it the time. Once done, the phone will reboot automatically into the updated OS. You can then close the LG UP tool.

Wondering why we made you install Magisk? That’s because when you simply flash the package and reboot your phone, TWRP will be replaced. To avoid that, you have to flash Magisk to modify the boot.img (kernel). On the other hand, if you do not want to keep TWRP, you can simply skip the step to flash Magisk.

When the phone boots, it shall be running Android 8.0 Oreo with all the latest features for you to enjoy. So, go ahead and explore all the new goodies that you just got on your LG device.

So, this was our tutorial on how to manually install T-Mobile LG G5 Android Oreo update. If you have any questions regarding the update or the process mentioned here, then feel free to drop a comment below.