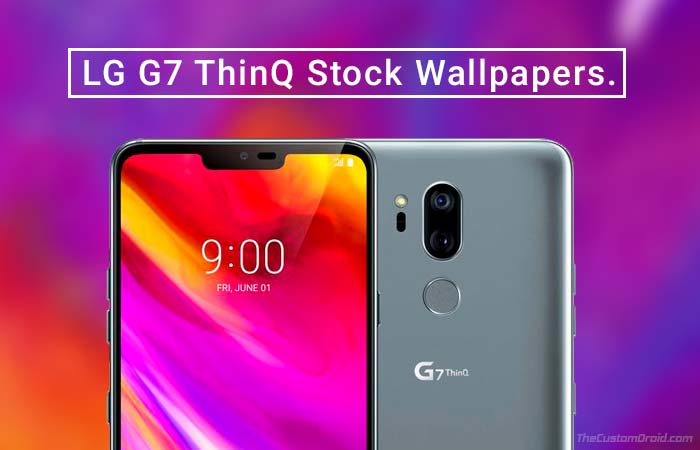 You can now download LG G7 ThinQ stock wallpapers and apply them on your device for a refreshing new visual experience.

We have all awaited the launch of LG’s new premium flagship for the year 2018. The phone was supposed to launch during Mobile World Congress in February 2018. However, the announcement was delayed due to some reasons. Anyways, the company recently revealed the LG G7 ThinQ, the successor to last year’s G6 that brings some refinements to the overall standard of both the hardware and software. Before you go ahead and download LG G7 ThinQ wallpapers, let us take a dive into the design and specs offered by the phone.

The new flagship from LG utterly falls for all the trends in the smartphone market that we have seen during the past one year. For starters, the LG G7 ThinQ sports a 6.1 inches full-view display with a notch at the top and smaller bezels. The overall exterior of the phone is covered with glass on both the front and rear, with an aluminum frame. With Corning Gorilla Glass 5, the phone is now more protected, compared to the predecessor. The power button has been moved to the right on this new iteration, with a new dedicated button on the left edge that triggers the Google Assistant. There’s a 16MP+16MP camera on the rear along with the fingerprint sensor that is placed just below the lens. Thankfully, the phone still supports the 3.5mm headphone jack at the bottom.

On the inside, the phone is powered by the powerful Qualcomm Snapdragon 845 chipset with 4GB/6GB RAM for 64GB/128GB storage, respectively. You can add up to 400GB of external storage to the device as well. The LG G7 ThinQ runs on Android 8.1 Oreo with the LG UX. According to the reports, LG claims on releasing Android P for the device, when Google delivers the final version to the public.

The LG G7 ThinQ is yet to reach the market. According to online reports, the device shall be available in South Korea at first and will slowly be arriving in major markets such as North America, Europe, and Asia. While there’s still some time before you can get your hands on the device, now is the best chance to add a little taste of it to your existing Android device. So, move down below to download LG G7 ThinQ stock wallpapers right now!

Thanks to the source (MIUI forums) we now have hands on the official LG G7 ThinQ wallpapers. Indeed, stock wallpapers are an important part of any new device, showcasing a new visual experience of its users. There are a total of 33 different wallpapers in 1072 X 2560 pixels resolution, all offering an abstract color-rich design. Applying these wallpapers on your Android smartphone or any other mobile OS device for that matter will give it a premium outlook.

Below are the previews of all the LG G7 ThinQ stock wallpapers that are available for download. Note that the preview images are just for your reference. For full-sized wallpapers, please download the ZIP or click on the Google Drive folder.

We have packed all the available wallpapers inside two ZIP files for your convenience. Should you wish to download individual wallpapers, you can use the GDrive link.

So you have just succeeded to download LG G7 ThinQ stock wallpapers. Let us know which ones do you like the most. Also, do you favor the new LG flagship over other competitors like Galaxy S9, Google Pixel 2, and OnePlus 5T? Simply drop a comment to let us know.