The first bezel-less smartphone from OnePlus was announced yesterday. You can now download OnePlus 5T wallpapers and use them on your Android device.

The much-awaited launch event of the imminent OnePlus flagship was held yesterday in New York. The event was all about the OnePlus 5T, which is now the latest flagship device of the company. The 5T brings a short list of new features over the predecessor, which we will be laying down in this article. Another notable feature of the device is the stock wallpapers that accompany the OxygenOS software. Go on and download OnePlus 5T wallpapers for your Android device. 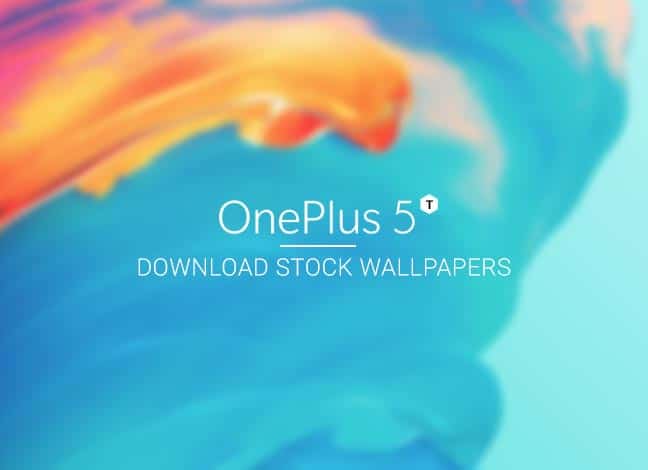 According to the information provided during the event, we have gathered the list of changes and things that remain common between the 5T and OnePlus 5.

The OnePlus 5T offers two obvious changes on the outside. The first change is that the device incorporates a bezel-less design, with minimal space on the header and the bottom. Compared to the OnePlus 5, the phone’s dimensions have only had a slight increment. The screen is 6.01-inches in size with an 18:9 aspect ratio. However, the inside technology of the display still stays true to AMOLED, as on the OnePlus 5.

To compensate for the space on the chin of the device, the fingerprint sensor has now been moved to the rear. The sensor stays within the reach of your fingers and is placed right above the OnePlus brand logo.

Now before you head over to download OnePlus 5T wallpapers, let us take a look on what’s inside the beautiful piece of hardware. The only inside change in the OnePlus 5 successor, is a different camera lens. The dual-camera on the rear dual camera is now assisted with 20 MP + 16 MP lens sensors, over the previous 2x(16 MP) configuration. The change has been made in favor of better quality images in low-light conditions.

The phone remains the same and comes rigged with Qualcomm Snapdragon 835 chipset and USB Type-C connector with Dash Charging. As for the software, the OnePlus 5T comes with OxygenOS based on Nougat 7.1.1. The company has confronted the viewers regarding the official arrival of Oreo-based OxygenOS. The final release would be made in early 2018, with the first beta coming up by the end of this month.

Other than these, the design and build quality stays the same with the curved Aluminum body. It will be available in Midnight Black scheme with 6 GB/64 GB and 8 GB/128 GB variants.

There is still some time before you can get your hands on the device. But, you can still add its touch to your Android by using the stock wallpapers.

The OnePlus 5T stock wallpapers are designed by Hampus Olsson. You might recognize the creative personality by his crafted wallpapers used in Paranoid Android. The designer has officially shared the stock wallpapers with the world.

You can now download OnePlus 5T wallpapers officially. There are 5 different abstract wallpapers that are vibrant and include a blend of colors. The wallpapers are provided in 4K resolution sized at 1080×2160 pixels. These will look best on devices that come with screens having 18:9 aspect ratio, like the Oppo R11s, Galaxy Note 8, LG G6, HTC U11 Plus etc.

However, you can easily crop the wallpapers to suit on Android phones with any screen size. Below, you can have an overview of the linked wallpapers. These are not full-sized wallpapers and only present for your reference.

Now, you can either download OnePlus 5T wallpapers individually from Hampus Olsson’s blog. If you also wish to get the 4K variants of the wallpaper, then you can grab all the wallpapers packed in *.zip format.

Once you have downloaded the zip package, extract the wallpapers and you’ll be ready to use them on your device.