OnePlus has just unveiled its mid-year flagship as the OnePlus 7T, along with the all-new OnePlus TV. The complete collection of OnePlus 7T stock wallpapers and OnePlus TV stock wallpapers for Android devices is now available for download. It includes 3 wallpapers from the phone, and another 3 from the TV, all in 4K resolution. Also, the OnePlus 7T Live Wallpapers APK is also available for older OnePlus devices running OxygenOS 10. Like for all previous OnePlus phones, these have been designed and created by Hampus Olsson and following the same abstract design aesthetics as seen on the previous OnePlus 7 series.

The Shenzhen-based Chinese company has come a long way since it released the OnePlus One back in 2014. Ever since then, the company strives on building smartphones that offer flagship-level hardware specs bundled with an uncluttered software for the best user-experience. OnePlus tends to release only two smartphones in Q2 and Q4 of every year, the device released in Q4 is generally a minor upgraded version of its predecessor, with a “T” moniker added to the phone’s name.

This year has been a little different though. Instead of one, the company released two smartphones in Q2 2019, as the OnePlus 7 and OnePlus 7 Pro. The latter was built to compete against ultra-premium OEM flagships like the Google Pixel 3/3 XL, Galaxy S10 series, etc. And now, in Q4 the company launched the OnePlus 7T and it is also the first time that the company has manufactured and released an Android-based smart TV, known as the OnePlus TV (Q1 Series).

Now before you go ahead and download OnePlus TV and OnePlus 7T stock wallpapers, let us take a brief look at what these two new products from OnePlus have to offer.

About the OnePlus 7T

Let us begin with the design. The first most obvious visual change in the design is the same water-drop notch display, as previously seen on the OnePlus 6T and OnePlus 7. On the rear, the OnePlus 7T comes with a curved matte-frosted glass back, with added layers that let produces diffused radiance when viewed from different angles in light. The phone’s rear is now also significantly more resistant to fingerprints, compared to the regular glass on the back of the OnePlus 7/7 Pro.

OnePlus 7T offers a 6.55-inch Fluid AMOLED display with a slightly bigger 20:9 screen ratio and 90 Hz screen refresh rate. The latter makes the phone’s usage much more smooth and fluid. The company’s co-founder Carl Pei also announced that from further on, all OnePlus smartphones will come with a fluid display (It doesn’t mean 90 Hz refresh rate) for a much-much better user-experience. The phone also supports HDR10+ on major streaming platforms like Netflix, YouTube, and Prime Video.

Moving over to the camera department, the rear triple-camera lenses on the OnePlus 7T are now enclosed in a circular cutout design, unlike the vertical alignment as seen on the OnePlus 7 & 7 Pro. There’s a 48 megapixels primary lens, a 16 megapixels 117° ultra-wide lens, and a 12 megapixels 2x telephoto lens. You can easily utilize and switch between the three lenses right from within the OnePlus Camera app’s UI using different available mode.

During the launch event, the company also mentioned that they have made significant improvements to the camera features like Portrait Mode, NightScape, etc. And have also introduced a new Macro Lens functionality that can take photographs of subjects as close as 2.5 cm.

The front camera offers a 16 megapixels wide-angle lens that can capture 1080p videos at 30 frames-per-second. Another major highlight about the front camera is that it now uses an ultra-precise gyro-EIS (Electronic Image Stabilization) technology that allows you to take photos and shoot videos preventing any shakiness caused by your hands. So, say goodbye to gimbals if you’re using the OnePlus 7T.

On the performance front, the 7T has received an improvement, this is, it now runs on the Qualcomm Snapdragon 855 Plus chipset that can be clocked to 2.96 GHz. Also, it is worth noting that the base variant of the phone now comes with 8 GB RAM instead of 6 GB as seen on the predecessor. There are two storage options to choose from, either 128 GB or 256 GB, both of them with UFS 3.0 technology.

The battery on the OnePlus 7T has been downed to 3800 mAh, when compared with the 7 Pro. We do suspect if it’d make any significant change to the battery longevity. The phone can be fast charged at 30W using Warp Charge 30T, which could also be safely used while operating the phone. That’s because the Power Management and heat dissipation is carried in the charging adapter, and the least amount of heat is transferred to the phone.

The OnePlus 7T comes with OxygenOS 10 out-of-the-box, which is based on the latest Android 10 version. This new software delivers an exceptional experience and offers several new features too. The phone is guaranteed to receive two major Android version upgrades for the next 2 Years and security patches for an additional year. 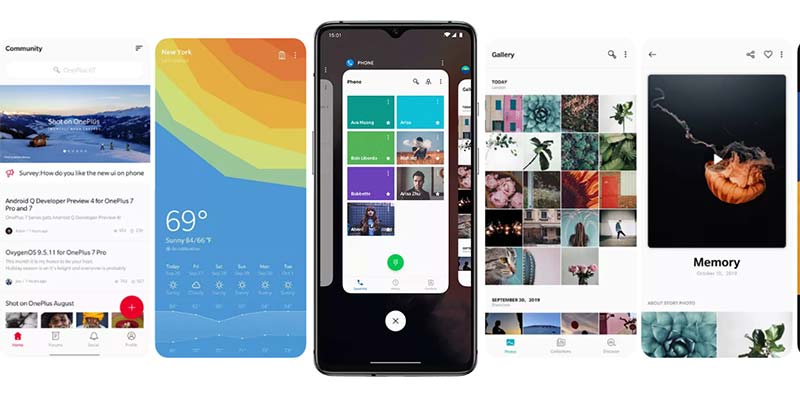 Last, but not the least, the OnePlus 7T comes in two color variants – (1) Glacier Blue and (2) Frosted Silver. It’s priced at $599, which is quite good considering the features it has to offer.

About the OnePlus TV

We all know OnePlus have had all its focus on smartphones for years now, and they slowly moved onto accessories as well, like the OnePlus Bullets Wireless, bumper cases, etc..

Earlier in 2018, the company discreetly informed the users that they have started working on the smart TV, which would set a high standard for the industry. And they have certainly achieved that today. And this year, the company is took a huge leap and has entered the home internet entertainment system with the OnePlus TV (Q1 Series), with a vision to connect the OnePlus mobile and home ecosystem.

Let us start with the TV’s design and display itself. First off, it’s extremely thin (about 7mm at the thinnest part) and offers a nearly bezel-less display with a 95.7% screen-to-body ratio (Yes, you got that right!). The rear of the OnePlus TV is like no other TV out there, it has an integrated design with a carbon fiber pattern on the back.

The available ports are hidden right inside a magnetic panel. This makes your TV not only look good on the front, but also on the back. Not to mention, a true example of craftsmanship.

The OnePlus TV offers a 55″ with 4K resolution, that’s powered by a custom-built QLED panel. According to Tilen Pigac, Head of Community, OnePlus did optimize/tweak the Quantum Dots layer (The “Q” in QLED) in a certain way to make the viewing experience even more vivid and enjoyable. The OnePlus TV also uses an Anti-glare technology to ensure that your view-ability is not disturbed in any conditions. 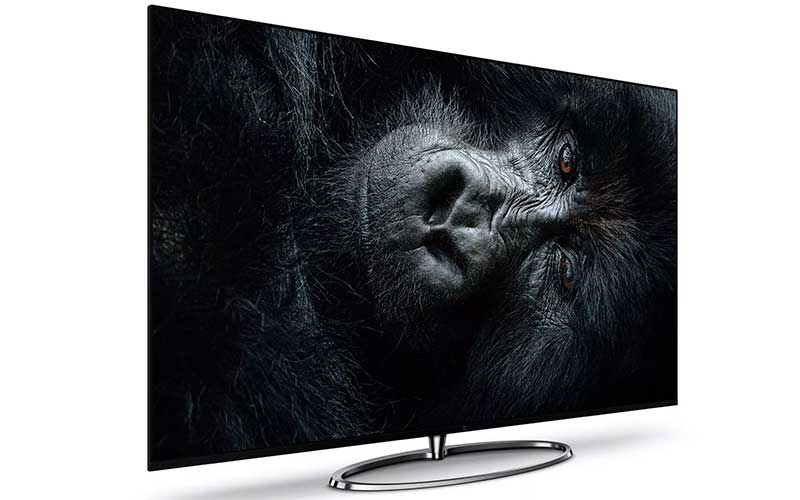 A huge part of the TV’s vivid display is the “Gamma Color Magic” Chip. It’s basically a small processor sitting inside the TV unit that comprises of various optimized algorithms. An example of which is “Super Resolution”. The algorithm identifies the picture for missing information and fills it in with two dimensional data for a much clear picture.

Other algorithms that have been used in the Gamma Magic Chip includes “De-Contour” and “MEMC” (Short for Motion Estimation, Motion Compensation). And so, this is how the OnePlus TV actually manages to provide you with a clear, smooth, and vibrant picture and video quality. The TV also uses the Dolby Vision technology to support HDR10 and HDR10+ for incredible contrast, increased brightness, and detailed colors. It

Moving onto the sound, the OnePlus TV is powered by Dolby Atmos to provide you an immersive audio experience. But that’s just not it. The TV comes with an integrated soundbar that slides out quietly when you turn on the TV. It could also produce sound at 50 Watts, something that isn’t offered by any other OEM high-end TV out there. Pair it all together, and you will have a cinematic and fully immersive sound experience. 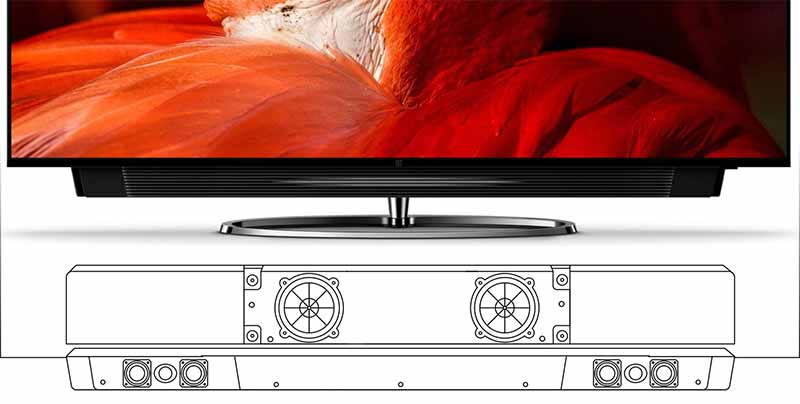 Coming over to the OnePlus TV remote/controller, it keeps the focus on details. Unlike your regular TV remotes, there are not a complete bandwagon of buttons, but just the ones that you’d actually need to control your TV. And unlike any other TV remote controller out there, there’s no need to slide out the back and inject AAA batteries. The OnePlus TV Controller comes with an in-built battery, that could be charged using a type-C USB cable, just like your smartphone. 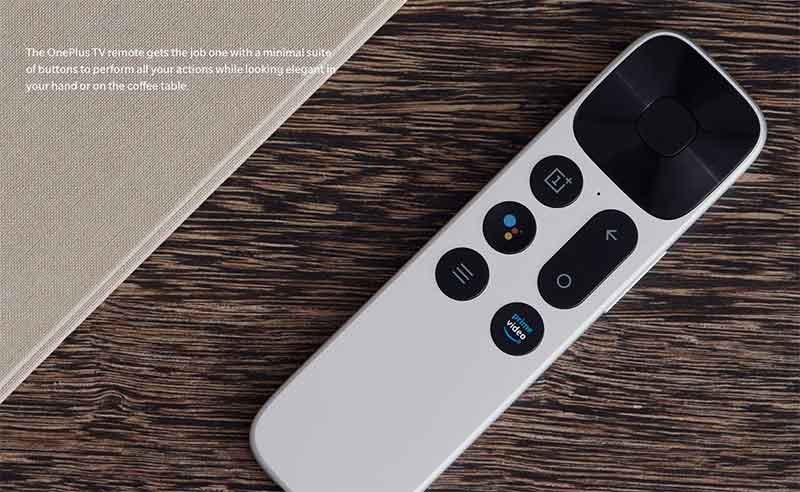 Lastly, the OnePlus TV is powered by the Android TV OS (based on Android Pie), to provide you a simple and clean experience. It includes features like screen casting, supports Google Assistant, OnePlus Play, etc. You can also use OnePlus Connect, which is an app for your Android phone, that will let you take full control over your TV to find and play content without much hassles. The company has also promised that the OnePlus TV will get Android TV software updates for the next three years. 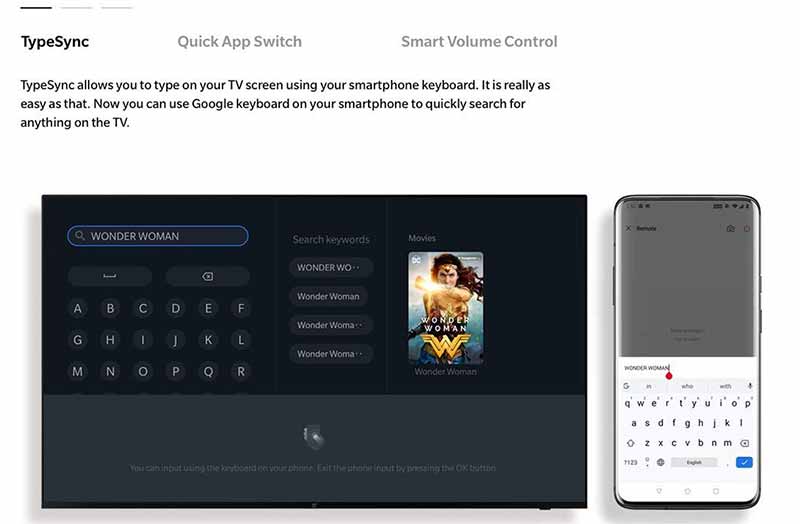 Both, the smartphone and the TV are now up for per-ordering online. Which means, there’s a lot of time (At least a few weeks) before you could actually get your hands on it. Even if you are not planning to purchase, you can still download OnePlus TV and OnePlus 7T stock wallpapers, and apply them to your Android device to get a fell of it. Or just for the sake of replacing or old and boring wallpaper with something more artistic and vibrant.

The wallpapers from the OnePlus TV were of course originally designed for the TV’s landscape display. However, the designer thought it’d be good if you could use the same artwork on your phones as well. So, he created portrait versions of the same wallpapers that can be used on any Android device. Believe me, OnePlus couldn’t have worked this out with anyone other than Hampus Olsson.

The OnePlus 7T and OnePlus TV wallpapers follow the same abstract design pattern as seen on the previous OnePlus devices. According to the designer, the wallpapers take a minimal amount of the distraction from the homescreen elements like the app icons, widgets, etc, while offering the unique vibrant colors at the same time.

Below are the compressed previews of the all the OnePlus 7T stock wallpapers:

Next, following are the compressed preview versions of all the OnePlus TV stock wallpapers available for download:

For your convenience, we have packed all these wallpapers in an archive (.zip format). Should you only wish to download them individually, we have also provided a link to the Google Drive folder.

The creator of these wallpapers also developed a wallpapers app, known as “Abstruct”, where he shares all his artworks, including the stock wallpapers of all the OnePlus devices. We encourage that you install his app (Just click the app box below) and give it a try, you will find a lot more unique wallpapers for your Android device.

A huge thanks to Hampus Olsson for sharing out the wallpapers. And once again, don’t forget that you can also download OnePlus 7T and OnePlus TV stock wallpapers via his app, along with many more of his unique artworks (wallpapers) and apply them on your Android device.