The latest Mi A1 beta software update based on Android 8.1 Oreo brings June 2018 Android security patches. You can now download Xiaomi Mi A1 9.6.2.0 Oreo update and follow the provided instructions to install it using TWRP or Fastboot.

Being part of Google’s Android One program has its own set of privileges. The Mi A1, which is also the first smartphone from Xiaomi to offer pure Android experience, has been a true example of the program’s potential. The phone managed to gain a lot of popularity due to the powerful hardware and always up-to-date software, all packed in an affordable price. Talking about the software, security update for the month of June 2018 is now rolling out to the users over-the-air as Beta firmware. If you want to install the update manually, then we have got you covered. Following the steps below, you will be able to download and install Xiaomi Mi A1 9.6.2.0 Oreo update. 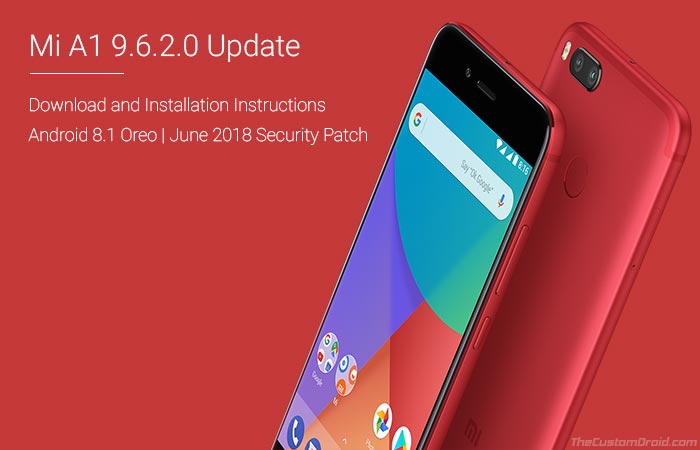 Talking about software updates, the Xiaomi Mi A1 received Android 8.0 Oreo during late 2017 and has been provided with monthly security updates ever since. Similarly, this month’s beta update brings June 2018 security patches to the device. The new firmware comes with build number OPM1.171019.019.V9.6.2.0.ODHMIFE.

Other than that, there doesn’t seem to be any major additions to the firmware. Although, you may expect it to fix certain minor bugs faced in the previous versions. Again, since this release is a beta, it will not be available as an OTA. Which means you will need to download the TWRP flashable ZIP/fastboot image and manually install Xiaomi Mi A1 9.6.2.0 Oreo update.

Thanks to XDA Senior Member Displax, we now have hands on the Xiaomi Mi A1 9.6.2.0 firmware based on Android 8.1 Oreo. There are two different ways to install it. If you have TWRP installed on your phone, you can simply install the flashable ZIP. Or, you can use Mi Flash Tool to flash the fastboot image.

Again, there are two different methods listed here. Method 1 will guide to flash the ROM ZIP using the TWRP recovery. On the other hand, method 2 will help you flash the Fastboot image via Mi Flash Tool. Choose the method according to your own convenience, the results will be the same.

When your phone boots, it shall be running the latest 9.6.2.0 Beta firmware based on Android 8.1 Oreo with June 2018 Android security patches. Even though as a beta firmware, having the latest vulnerability fixes on your phone is totally comforting. The month of June is already approaching its end, and we still haven’t seen the public release anywhere. Xiaomi already seems to be off-schedule with this month’s update. But, we do hope that they are working on releasing Android 8.1 Oreo for Mi A1 finally.

So, this was our guide to download and install Xiaomi Mi A1 9.6.2.0 Oreo update. If you have any questions, please leave them down in the comments. Once the official update is available, we will update this post with the download links and corresponding instructions. Until then, stay tuned!