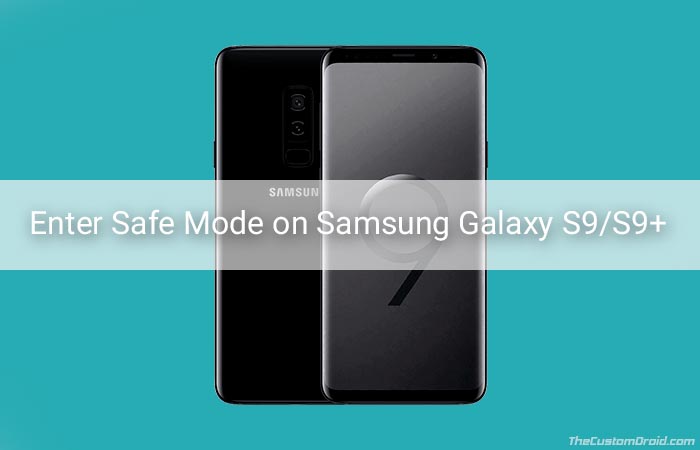 Here is this guide, you will learn how to boot Samsung Galaxy S9 Safe Mode. Booting into the safe mode can help you resolved certain software issues on your Samsung Android device.

Smartphones are smart all because of the functions they can perform. The functions can be done only with the help of two main factors. One is the software and another one is the hardware. Hardware is a constant attribute, but the software is something that gets updated always and it can often crash. When the device gets crashed or faces a problem once in a while it could be considered as normal. But regular crashing/force closes may be the results of software or hardware related issues. Booting Samsung Galaxy S9 Safe Mode will allow the users to deal with software issues raised due to third-party apps and softwares installed on the device.

One of the worst nightmares for every Android user will be the freezing of the phone while in operation. This is because each and every task is now integrated with the smartphone. For example, we don’t even know all the phone numbers in our contact. To access this in an emergency situation there is no other way other than accessing contacts app and searching for it. But what if your new Samsung device gets into a bootloop or the app itself keeps force closing constantly? Of course, newly bought devices are not far from such problems. After a timed period, the system may get clumsy even with those high-end specs and start rendering problems, blocking the normal operation of the phone. In such a case, one of the handiest technique is boot Samsung Galaxy S9 safe mode.

It is basically a diagnostic mode in an operating system. Just like desktop OS, mobile OS like Android also have a dedicated Safe Mode. While your Samsung Galaxy S9 is the said mode, it can operate safely without crashing issues. The specialty of this mode is that it kills the operation of all third-party apps and it enables the user to safely retrieve the data. It will not interfere with the third-party apps.

Getting into this the safe mode is an easy part of most Android phones is similar. But in Samsung’s latest flagship phone is quite tricky. Here we discuss the steps to enter Samsung Galaxy S9 safe mode. Before we actually proceed to the steps, let us take a quick look at various situations that may demand the use of Safe Mode to fix certain issues.

The Galaxy S9 and Galaxy S9 Plus have proved to be a true successor to the S-series legacy. The manufacturers has made certain that everything that was wrong with the Galaxy S8 was address with the latest flagship. For starters, the fingerprint sensor has now been bought down below the camera lens for a much accessible reach. One of the major highlights also include switchable aperture depending upon the light. The phone is powered with the Exynos 9810 octa-core processor, pairing it with Samsung Experience 9.0 based on Android Oreo for the ultimate software experience. Despite all the hefty hardware and software, even the Galaxy S9 can land into issues related to the software.

So in case you’re facing any such problems like frequent freezes, random reboots, etc, you can simply boot Samsung Galaxy S9 Safe Mode. It can help you diagnose the device for any issues caused by third-party apps.

You may further go ahead and analyze the device for any issues that have been facing during the normal boot.

By this, you can enter safe mode on Galaxy S9 and Galaxy S9 Plus. We hope that this article helped you and appreciate your valuable suggestions. So kindly drop any comments if you have found this useful.