Finally, Samsung has successfully begun updating its Galaxy Note 8 devices to stable Android 9.0 Pie via One UI. The update is now rolling with the build number N950FXXU5DSB2. Galaxy Note 8 Stable Android Pie update also brings the February 2019 security patches. As of now, the Pie update has been reported in Bulgaria and Slovakia. Interestingly, these two regions were not part of Samsung’s beta test phase. This means other regions where the beta test was conducted should see the update anytime now. 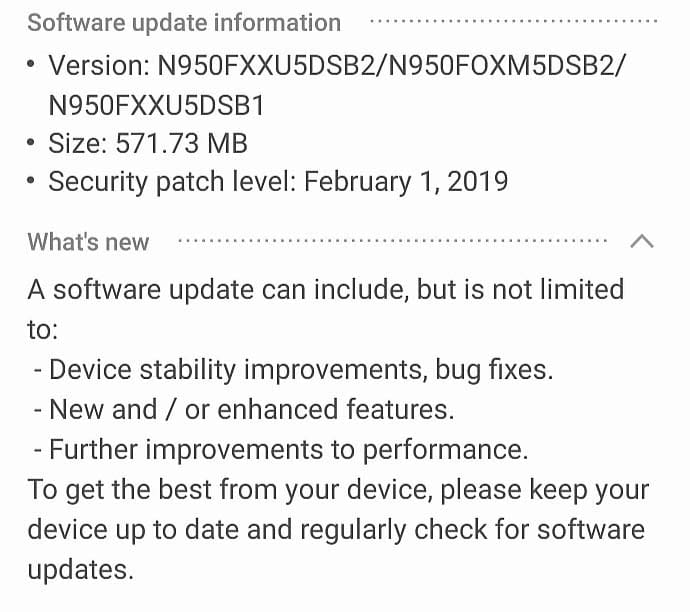 The stable iteration of Android Pie is openly rolling for both beta and non-beta users. So, those happen to be in Android 8.1 Oreo on their devices, can also upgrade to the 9th generation of the Android OS. From last few weeks, the Korean smartphone giant has been rigorously testing Andriod Pie on Galaxy note 8 through a series of beta testing.

How to Update to Galaxy Note 8 Stable Android Pie

OTA updates are automatic in nature. So, gradually they will drop into other regions as well. Now itself everyone may not see the update prompt on their phones. However, you can search for the N950FXXU5DSB2 update on your own. Who knows, the update may be rolling in your region. So, to do it, go to your device Settings > System Update >Tap on Check for Latest Updates.  Download the update if it shows up with the new build number.

The latest system upgrade N950FXXU5DSB2 weighs over 570 MB. So, it’s ideal to connect to a Wi-Fi network and download it swiftly. Charge your device’s battery around 50% or more before updating it the new Pie OS. A low battery will not let you install Android Pie on your Galaxy Note 8.

So, guys..! Keep your eyes peeled out, for the Galaxy Note 8 Stable Android Pie may roll into any region anytime. If you receive the update do let us know. Install and enjoy the sweet pie OS from Google.