Thanks to Samsung’s efficient system upgrade roadmap, Galaxy S8 Stable Android Pie Update is now available. As of now, the system software update has made its debut in the Germany region. It’s bigger cousin Galaxy S8 Plus is also getting its share of the Pie.

Both the devices are now stepping up to Android 9.0 Pie with new build numbers G950FXXU4DSBA and G955FXXU4DSBA. New security patch of February 2019 is also accompanying the current Pie update. It also brings the new interactive One UI interface which is an advancement from the previous Samsung Experience UI. 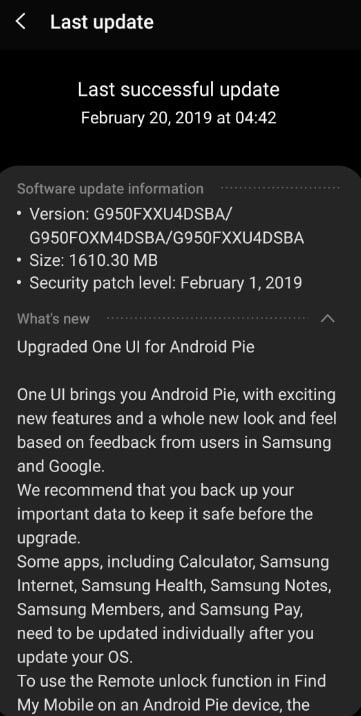 Apparently, after successfully rolling out Android Pie for its latest flagships, dropping the Pie party for Galaxy S8 took very less effort. After a quick series of Pie-based One UI Beta rollouts for Galaxy S8/S8+, now the stable update is knocking into the devices. The latest system update is making its way over-the-air and weighs a little more than 1 GB. Currently, it’s being reported in Germany and soon other parts of Europe will start seeing it as well.

As we said, the devices will now get an upgrade to the One UI interface. Apart from this regular Android Pie features such as gesture navigations, adaptive AI-based battery, improved notification management, enhanced Doze mode, Recent Apps, App slices,  etc will grace the devices. Thankfully Samsung is also integrating the current month’s security patch with the update package.

OTA updates usually drop into devices automatically. However, it happens in batches in regions so not all users will get the update right now. Gradually they will drop into other regions around the globe. However, you can search for the G950FXXU4DSBA and G955FXXU4DSBA for S8 and S8 Plus update on your own. Do this if you don’t see the OTA for a long time post-release. To do it, go to your device Settings > System Update >Tap on Check for Latest Updates.  Download the update if it is available.

The latest Pie update G950FXXU4DSBA weighs over 1 GB. So, use a Wi-Fi network and download it quickly. Make sure to charge your device’s battery around 50% or more before upgrading it to Android Pie. A low battery will not let you install Android Pie on your Galaxy S8/S8 Plus.

So, make sure not to miss out on the Pie update and install it as an when it rolls. Install and enjoy.