Xiaomi’s ever-increasing popularity has led the company to bring out the best of their devices. Though Xiaomi has made Redmi a separate brand, they bring out the efficient and affordable machines for the users. Speaking of which, the note series from Xiaomi is well received in the Asian markets. Now, to keep up with the high demand, Xiaomi is all set to drop Redmi Note 7. Yes, this new device was spotted on Geekbench listing. The exciting thing about this is the Redmi Note 7 will run Android 9.0 Pie out-of-the-box. 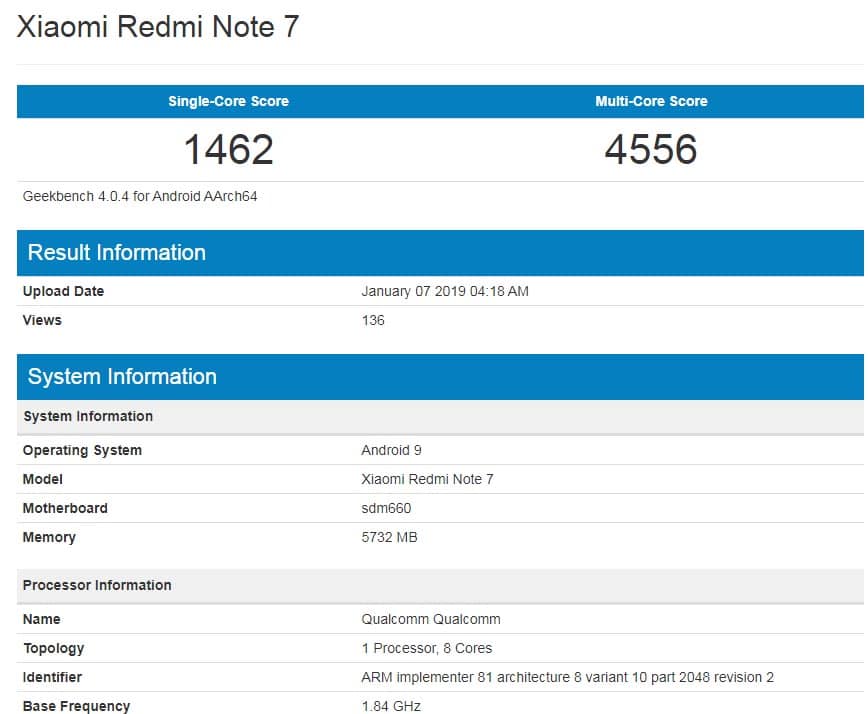 This device will pack better hardware than its predecessors. The 5th and 6th generation of Note devices from Xiaomi run Snapdragon 636 chipset. Now Redmi Note 7 will come with Snapdragon 660 from Qualcomm. You may also see that the Redmi note 7 from Redmi will run 6 GB of RAM.

As the trait goes, it may have a Pro version which may bring about 8 GB  of RAM. However, still, it’s questionable whether it can butt heads with the high-end gaming machines with the same memory. The latter pack other hardware aspects as well which note series doesn’t pack. It does so to maintain its budget status. There is no doubt that the Note 7 from Redmi will be an efficient daily driver. Apart from the chipset and memory, there is no other revelation on any other tech specs. However, we can expect a good AI-powered dual camera set-up. usually, Redmi Note series bring a good and variant color body design. So, we can expect the same trait to continue with Redmi note 7 as well.

After Mi Mix 3 Redmi note 7 will be the second device to run Pie OS out-of-the-box. So, we can infer that the future Xiaomi devices may come with Android pie as well. So, what’s your take on this..?! Will you be upgrading to the Redmi Note 7 to experience stable Android pie..? Do let us know what you think about the upcoming device from Redmi.