How to Get iPhone X Navigation Gestures on Android without Root [Lollipop 5.0+] 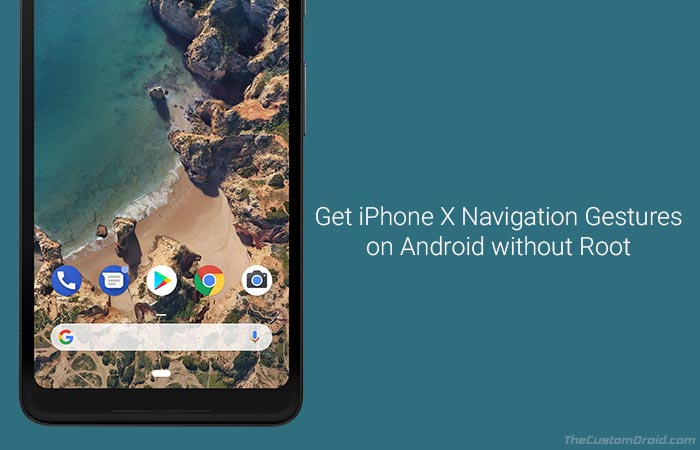 The popular XDA developers community has announced another useful app for Android users. The new application called Navigation Gestures allows users to get iPhone X navigation gestures on Android devices running Lollipop 5.0 and above. In this post, we will be discussing the benefits of using this app, its features, and how to install and configure it on any Android device.

Ever since last year, navigation gestures has been a controversial feature when it was first announced with the iPhone X. To combat it, Google announced its own system of navigation gestures in the Android P Developer Preview. However, the feature is still not polished when compared to the former. Plus, it is also limited to the devices which can run Android P beta officially and unofficially. If you are happy with this new feature or want to mimic the one on the iPhone X, then we have got an app for you that will allow you to get iPhone X navigation gestures on your Android using Navigation Gestures app. And before you even get to it, let us point out that the app does not require your device to be rooted, which is a big plus!

XDA forums and community has been a host to developers and enthusiasts for more than a decade now. It is now the go-to online community for anyone who is looking forward to Android development and customization. Since the beginning of this year, XDA has striven to bring apps that would help users more easily and efficiently operate their Android phones. We already saw One-Handed mode a few months ago and now comes another app that will help you get the exclusive iPhone X navigation gestures on your older Android phone.

So how does it actually work? According to XDA’s editor-in-chief Mishaal Rahman, it makes use of an API that can be accessed by granting special permissions to the app. This permission helps to hide the stock on-screen navigation bar and replaces it with the gesture controls.

Now, before we go ahead and demonstrate how to get Android P/iPhone X navigation gestures on your phone, let us take a look at what the app has to offer.

Navigation Gestures by XDA totally mimics the new way of operating your Android phone without any on-screen buttons. This is highly similar to the gesture controls that we all have seen on both – the iPhone X and Android P. The gesture control bar that appears like a pill replaces the on-screen buttons on your phone. There are a variety of gestures available, which could be assigned various actions. The free version of the app comes with all the standard navigation gestures. The premium add-on will further add access to even more actions. We have listed the available gestures and corresponding actions for both the versions below.

The free version offers the following actions for all the available taps and gestures listed above:

Should you opt for the Premium Add-on, you will get the following list of additional actions:

That’s quite something for an initial release, right? So get ready to try and experience each one of these gestures and actions by following the steps below.

Also read: How to Get Android P Features on Devices running Oreo, Nougat, Marshmallow, and Lollipop.

How to Get iPhone X Navigation Gestures on Android?

Setting up the Navigation Gestures app is pretty easy. We will start off by installing the app on the phone, followed by granting a few special permissions both on-device and also via the ADB commands. Again, as we told earlier, the app does not require root permissions. However, if you have a rooted phone, this app shall work normally without having to execute the ADB commands.

We have split the steps so that you can understand the complete process easily. Before you go ahead, it is important that you enable USB debugging on the phone and install Android SDK tools on the PC. This is very important and will be required further during the process.

The first step in order to get iPhone X navigation gestures on your Android phone is to download and install the ‘Navigation Gestures’ app by XDA.

Get Navigation Gestures on Google Play

Start off by downloading the app from the Play Store by clicking on the button above. In case the application is not available for your region, you can also download the APK and install it manually. For manual installation, you will need to go to Settings > Security and enable the ‘Unknown sources’ option. On devices with Android Oreo, go to Settings > Apps & notifications > Special app access > Install unknown apps.

Now the second step in order to get iPhone X/Android P Navigation Gestures is to grant the required permissions to the app. This is where the things get a little nerdy but are still very simple if you follow the steps correctly. 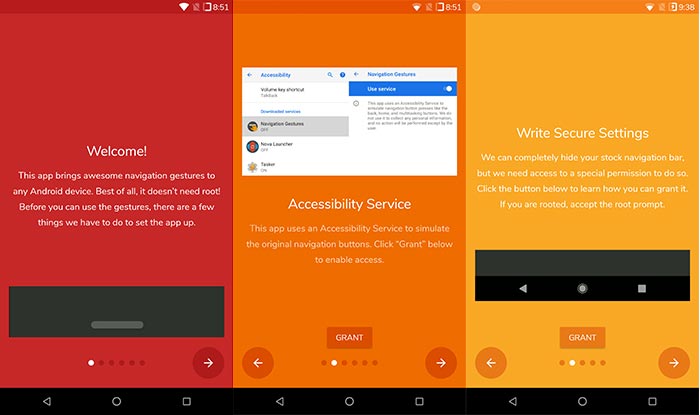 Once the app is installed on your Android phone, go to the app drawer and run the ‘Navigation Gestures’ app. Upon launching, you shall be greeted with a welcome message along with some details about the app itself. Simply click on the circular arrow icon on the bottom-right. On the next screen, you shall be prompted to grant Accessibility permissions to the app, so tap on the ‘GRANT’ button. In the Accessibility menu, tap on ‘Navigation Gestures’ and turn ON the toggle. When prompted with a message, press ‘OK’ to confirm. 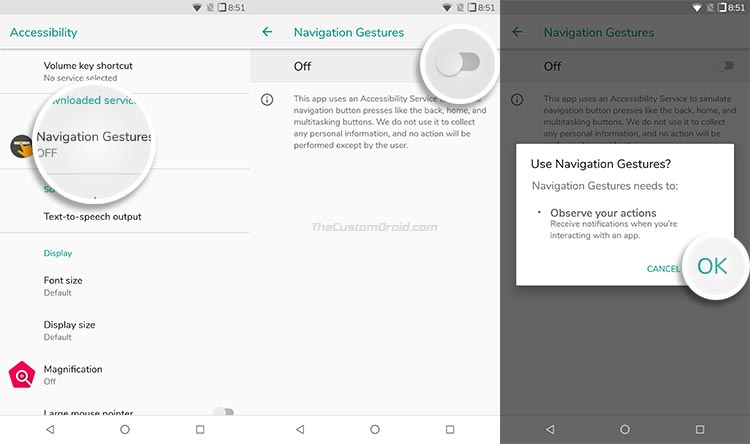 Next, return back to the app and press the arrow icon again to move to the next step. Make sure USB debugging is enabled on the phone and also that Android SDK tools are installed on the PC.

Once the command is executed successfully, press the arrow icon located at the bottom-right of the app screen. Just follow the on-screen instructions until you see the app’s main screen. 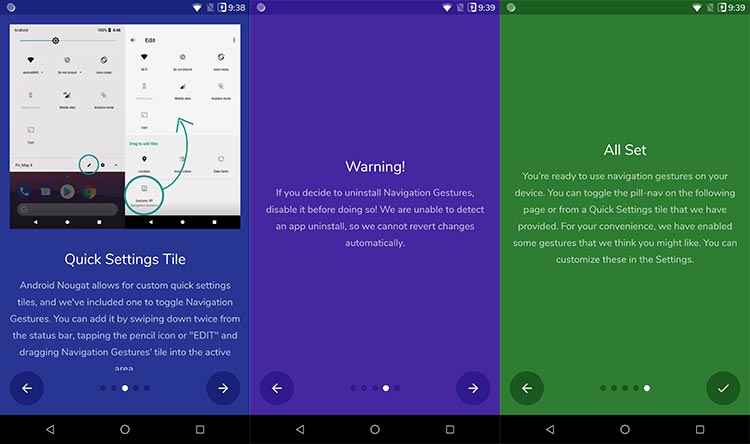 Now that you have completed the setup, you’re all set to enable iPhone X navigation gestures on the device and configure it. The app’s interface is pretty simple. So, once you have cleared the setup process, you shall see the “Gestures Enabled” toggle placed at the middle of the screen. Simply switch ON the toggle to enable Android P navigation gestures on your phone running Android Lollipop 5.0+. 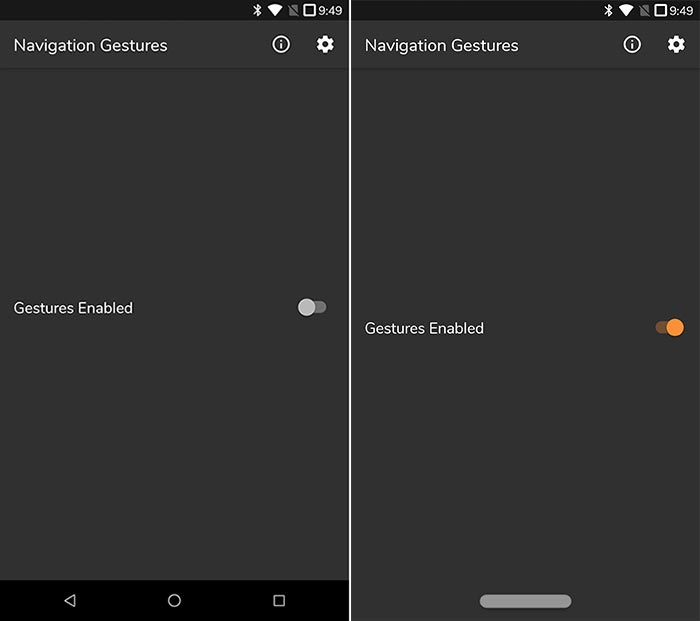 The navigation bar will be instantly replaced with the new pill-like control button. By default, swipe the pill left will take you to the previous screen. Swiping it up will open the recent apps menu, and swiping it down will hide the navigation pill. 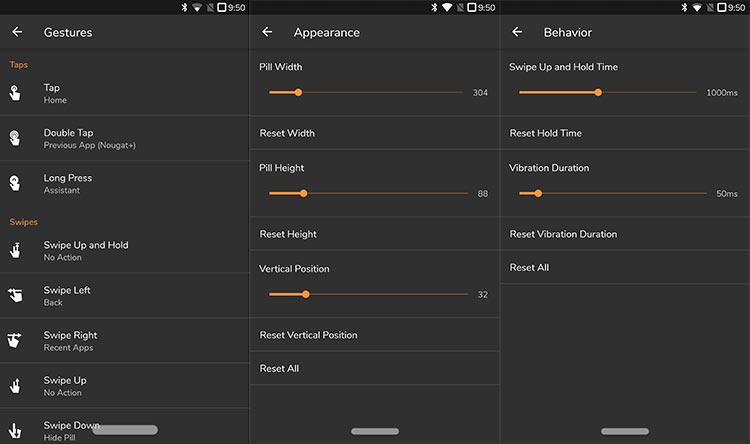 To configure Navigation Gestures on your device, simply press the gear icon on the top-right of the screen. There should be three different settings options available on the screen, which are as follows.

Once you have explored the options and configured the actions, you can exit the app and start using the all-new iPhone X-like/Android P navigation gestures on the phone.

No doubt, the app brings the easiest approach to get Android P navigation gestures on older devices with Lollipop 5.0 and above. The biggest edge it has over the alternatives is that it doesn’t require root permissions, but will work on rooted phones as well. Also that it doesn’t break functions such as the keyboard like in other apps. Of course, since the app is pretty new, you might experience some bugs here and there. But those will definitely be fixed in future releases. You can also provide your feedback and report bugs on the official XDA thread.

If you really like the app, you can also buy the premium add-on which will further unlock many more actions as stated earlier in this post. It is available on the Play Store for just $0.99.

As far as the new gesture controls go, it would take us time to get handy with it. The new way of operating the phone didn’t receive much of a warm welcome from everyone. It has been years since we have operated on navigation buttons, but truth be told, the new Navigation Gestures are the future. For the good or bad, we will eventually need to accept it.

So this was how you can easily get Android P navigation gestures on older Android devices. Let us know your opinion about the new feature and also if you like this app or not (We are quite sure that you’ll love it!). Our appreciations go to the XDA community and developers behind this app.