Although flagship devices bring premium features onboard, they might also carry some glitches/problems. These glitches can be on the software or hardware front. We are talking about the on-going Google Pixel 3XL sound imbalance issue.

This problem has been reported by various users out there who lately received their new Pixel 3 XL units. The latest flagship offering from Google, the Pixel 3 XL packs two front firing speakers. One of the duos sits on the big notch whereas the second one resides on the chin.

According to various users at Reddit (Including Artem from Android Police), Google Pixel 3XL Sound Imbalance is causing the bottom speaker to provide a very loud audio output. The upper speaker sounds pretty much non-existent. Some users even compared the speaker with other previous Pixel devices. Other devices sound quite balanced whereas the Pixel 3 XL speakers sound pretty imbalanced.

However, Google clarifies by stating that, the design of the speakers is like that. The design enables the speakers to provide for louder sound which is 40% louder than last year’s flagship. Also, it aims at providing a better low-frequency response.

The Mountain view company further mentions that they use new amplifier technology with advanced speaker protection algorithms. So, this enables the speakers to push harder and get every last bit of performance. They also mention that for better audio enhancement they joined hands with a Grammy-award winning music producer. So, there is no issue in the design or manufacture front. 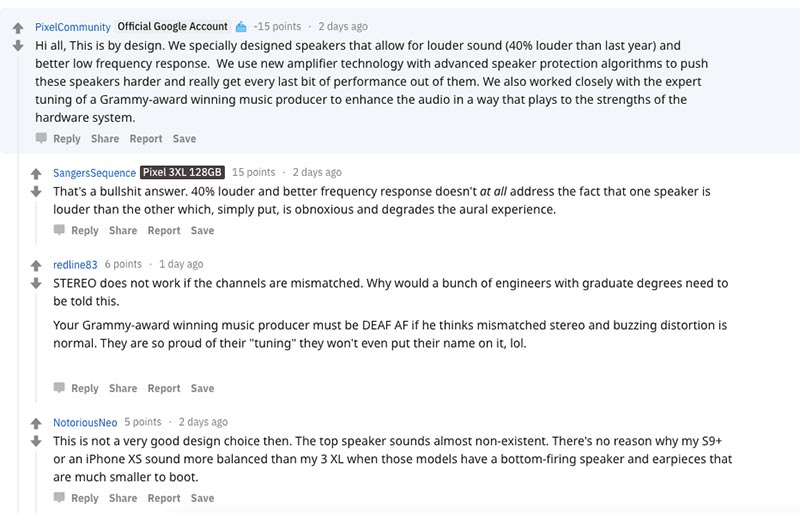 Now, it’s a common thing that both speakers should go hand-in-hand when it comes to sound balance. This is a basic trait that every device follows. Now, Google wants to introduce some new trend and unfortunately, people are finding it irritating.

Google pretty much acquitted itself by stating that the alleged imbalance is just how they designed the device. So, now the question is, what will be the solution to this Google Pixel 3 XL sound imbalance issue? Would there be a software update that will fix it or would users need to adapt to this behavior? Several users are already seen being annoyed with the issue and didn’t think that Google’s response was justified.

Do share your view with us in the comments section below and stay tuned for further updates on this.