Want to root your newly bought HTC flagship? In this tutorial, we will show you how to root HTC U12+ without TWRP recovery. This will be done using Magisk by XDA Developer topjohnwu.

HTC revealed its flagship for the year 2018 recently, in hopes to stand out among the tough competition. The phone offers a unique design with a translucent back that lets you see some of the phone’s internals. When it comes to the chipset, the HTC U12+ sports the Snapdragon 845, again, seen on other OEM flagships such as the Samsung Galaxy S9+. With the new phone, HTC has stepped up their game with the Edge Sense technology, that was first seen on the U11. Unlike the predecessor, the U12+ offers several new gestures to initiate certain actions on the device.

Overall, the phone has managed to offer some exciting new features including the dual-camera setup on the front and rear. Although the phone comes with Android Oreo out of the box, it is planned to be upgraded to Android 9.0 P. Despite all the goodies, users might often like to explore beyond the software provided by the OEM. In such a case, one would like to root HTC U12+. Rooting will give the user the ability to modify the software according to his/her needs. These include, but are not limited to kernel optimizations, mods such as Xposed Framework or ViPER4Android, and more. 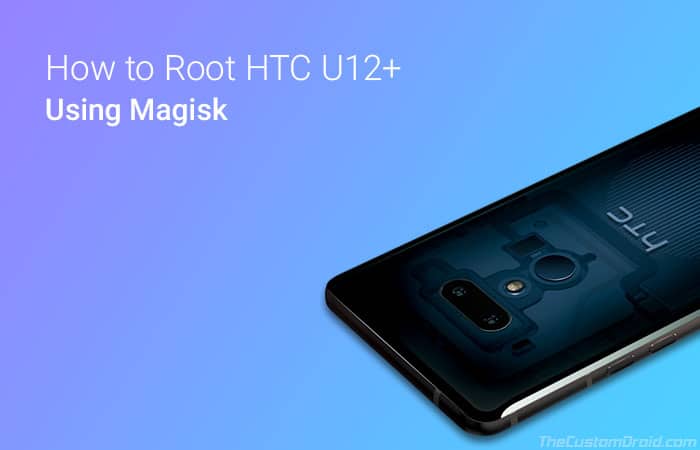 Guide to Root HTC U12+ without TWRP Recovery

Now, when we talk about rooting an Android device, the first thing that comes to our mind is ‘TWRP recovery’. It’s a custom recovery that would allow a user to flash a root package, such as SuperSU or Magisk to root a phone. But, that’s not the case with the HTC U12+ right now. The phone was released pretty recently and has still not gained support for TWRP recovery, officially or unofficially.

But thanks to some XDA enthusiasts, we now know how to root HTC U12+ without TWRP recovery. The method was first brought up by XDA senior member Freak07. According to which, we can use Magisk Manager to patch the stock boot.img (kernel) for root. In this case, the help was provided by another XDA senior member 5m4r7ph0n36uru. The said member has provided stock firmware ZIP for the HTC U12+. Users can download the firmware file and extract the ‘boot_signed.img’ file (Typically known as boot.img). Once extracted, one can easily patch it to root HTC U12 Plus.

If the process seems tricky at first, then don’t worry, we have got you covered. We have detailed the procedure below, which will help you easily root HTC U12+ using Magisk, without having to install TWRP recovery first.

How to Root HTC U12+ using Magisk?

As soon as you enter the reboot command, the HTC U12+ will boot into the rooted OS. You should now be able to use root-enabled applications or install Magisk modules to further customize your phone. You can also leverage Magisk Hide option in the app to hide root from certain applications.

So there you go! You have just been able to root HTC U12+ without TWRP recovery. If you have any questions, please leave them down in the comments.