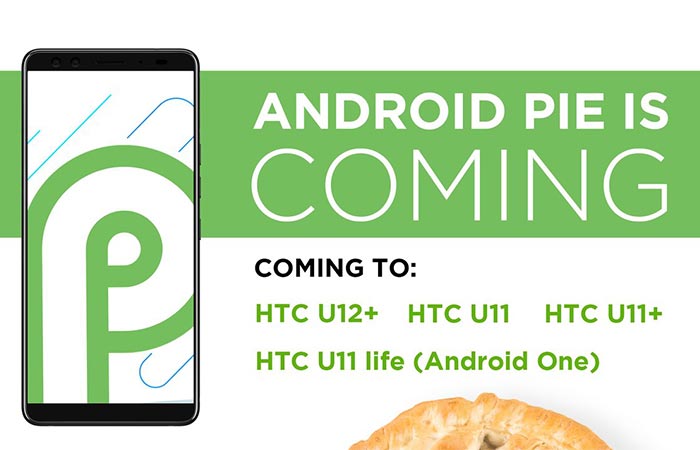 Just like Essential, Nokia, and Huawei, today, HTC also confirms the future appearance of Android 9.0 Pie for four of their smartphones. HTC made this announcement through their official Twitter account, saying Android Pie will be coming to their four devices soon.

The four devices are HTC U12+, HTC U11+, HTC U11, and HTC U11 life. However, HTC still didn’t reveal any exact schedule of when this update will be rolled out. Through their twitter post, HTC said “We’re pleased as pie to confirm updates to Android Pie for the HTC U12+, U11+, U11, and U11 life (Android One). Timeframes for roll-out will be announced in due course.”

We're pleased as pie to confirm updates to Android Pie for the HTC U12+, U11+, U11, and U11 life (Android One). Timeframes for roll-out will be announced in due course.

We can't wait to know what you think of Google's freshest slice of Android! pic.twitter.com/mPJePFegne

Google released Android 9 Pie a few days ago. Considering the number of significant features and changes that Pie brings, it could be the best Android version to date. A few to mention include Adaptive Battery mode, gesture-based navigation, App Actions & Slices, Digital Wellbeing, and more. Apart from the Google Pixel series, the Essential Phone has already received the update, which definitely compels other OEMs to jump right to it.

So this is clear that HTC didn’t specify a date for the upgrade. But since they mentioned it now, it means that it shouldn’t be far away and we hope that HTC will officially update the device in coming months, if not weeks. Being a part of the Android One program, the HTC U11 Life should be upgraded sooner than other HTC smartphones.

Stay tuned with us to get any further updates regarding this news. Just to remind you, the new Android P comes with lots of new features that make it the best Android version till date.