Yesterday, HMD launched the latest iterations of their mid-range lineup in an event in Moscow. The newly refreshed Nokia 2, Nokia 3, and Nokia 5 follow the latest trend in the mid-range market, while also keeping the prices reasonable. Now, HMD India team leaked the price list for the new devices via the official website, hinting the impending launch of the smartphones in the country. Note that the prices shown, according to HMD Global, were inaccurate and may differ upon the launch. 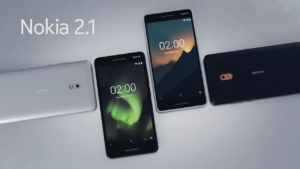 As per the official website, the budget Nokia 2.1 will retail at about Rs. 6,999. The device is rocking a large 5.5” HD IPS LCD display and is running on Android 8.1 Oreo (Go Edition). The Qualcomm Snapdragon 425 will power the device, a significant upgrade from the shoddy Snapdragon 212 used in last year’s model. The memory configuration remains at 8GB/1GB RAM, although Android Go is well optimized to run such hardware fluently.

The camera on the Nokia 2.1 is rather pedestrian. It’s the same 8-megapixel primary shooter but can now shoot videos at [email protected] The front is the same story. It’s a similar 5-megapixel module with fixed-focus lens borrowed from the Nokia 2. The battery steps down from 4100mAh to 4000mAh, but HMD assured that the battery life would be the same. In fact, according to them, the Nokia 2.1 consumes 10% less power than the Nokia 2. 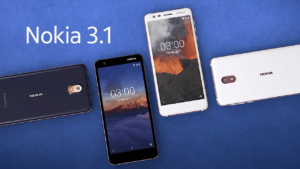 Next on the list is the new Nokia 3.1. According to the official website, the device will retail at about Rs. 9, 499 but is subject to change. The Nokia 3.1 features a 5.2” 18:9 aspect ratio display and is powered by MediaTek MT6750N. It will be available in two configurations, one with 16GB/2GB RAM and other with 32GB/3GB RAM. According to HMD, the Nokia 3.1 is 50% more powerful than the last year’s model.

The primary camera on the Nokia 3.1 is now a 13-megapixel module with f/2.0 lens. The improved processor now also allows it to record up to [email protected] At the front, an 8-megapixel fixed-focus camera with wide-angle f/2.0 lens will suffice all the selfie needs. 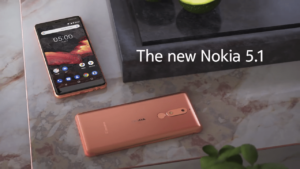 Last is the Nokia 5.1. Just like the Nokia 3.1, it now belongs to Android One program. The device now sports a better 5.5” FHD+ 18:9 aspect ratio display with 443 pixels-per-inch. The MediaTek Helio P18 powers the device, paired with 16GB/2GB RAM or 32GB/3GB RAM option. HMD claims that the new Nokia 3 is 40% more powerful than the first Nokia 5. Both the Nokia 3.1 and Nokia 5.1 will also have Google Lens and ARCore integration and is part of Android Enterprise devices.

In the camera department, the new Nokia 5.1 borrows a 16-megapixel primary shooter from the Nokia 6 (2017), employing a Phase Detection Autofocus (PDAF) and f/2.0 lens. The front will be the same 8-megapixel selfie camera with wide-angle lens. This time though, no autofocus.