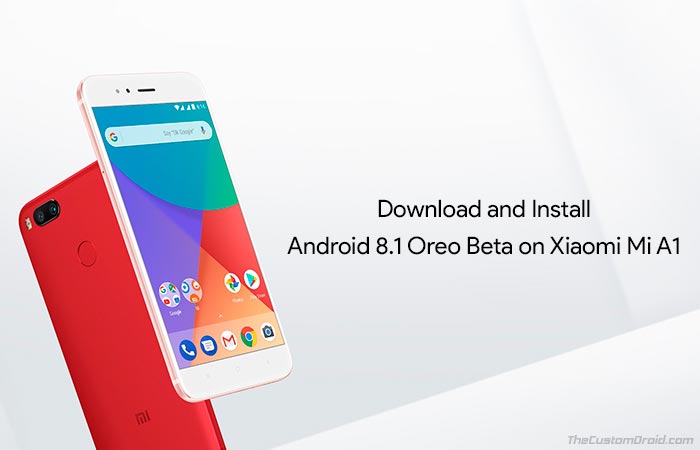 There’s some good news for the Mi A1 folks! A new build based on Android 8.1 Oreo has been leaked with May 2018 Security Patches. In this tutorial, you will learn how to download and install Android 8.1 Oreo Beta on Xiaomi Mi A1.

Up until now, the manufacturer has made sure that the Xiaomi Mi A1 receives timely updates every month. The phone also received Android Oreo support as planned, and even earlier than several other flagship devices out there. This month has only begun and we now have hands on a leaked ROM that not only brings Android 8.1 Oreo to the phone but also the current month’s security patches. So you, the users of the Mi A1 now have the chance to update your phone even before Google’s own Pixel and Nexus lineup. The instructions below will help you install Android 8.1 Oreo Beta on Xiaomi Mi A1.

Guide to Install Android 8.1 Oreo Beta on Xiaomi Mi A1

The month of May has only just begun, and Xiaomi seems to be on its toes, especially when it comes to the Mi A1. That’s probably because unlike rest of the phones manufactured by Xiaomi, the Mi A1 is based on the Android One program. Which means that it is given the privilege to receive latest Android version and monthly security updates right on time.

Before you even get to the steps and install Android 8.1 Oreo Beta on Xiaomi Mi A1, let us go through the bits of information that we have about the leaked ROM. The ROM was leaked over at the XDA forums by Senior Member Pachenko_Gr. The original poster didn’t mention much, except that the ROM is based on Android 8.1 Oreo and a screenshot of the ‘About phone’ section. 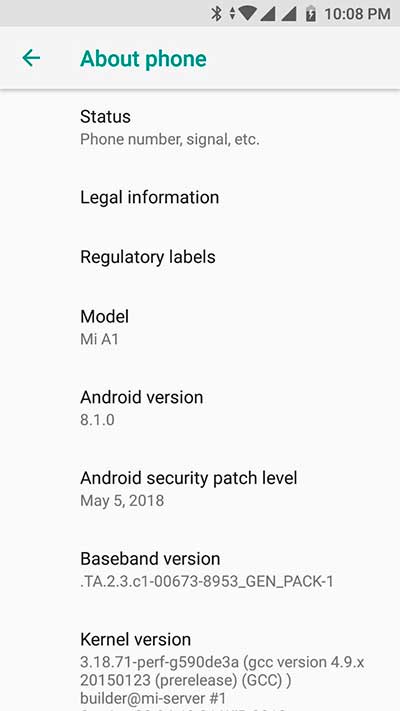 According to that, the new build offers May 2018 security patches, which is a big plus one for the users. The patch is not even available for the Google devices yet. Users who have already installed the 8.1 Oreo Beta ROM have also reported that the stock camera app is not working. But you can simply enable Camera HAL3 and use the GCam port or any other third-party camera app. Moving from 8.0 to 8.1, you will be seeing some new changes including the revamped Power Menu and dynamic dark theme when using a dark wallpaper.

While the official link is available, we’re going to opt for a slightly different method. To aid the enthusiasts who really want to install Android 8.1 Oreo Beta on Xiaomi Mi A1, XDA senior member sooti has compiled a TWRP-flashable build. So users with TWRP recovery can easily flash the provided build and test out the latest leaked ROM on their phone.

Please ensure that you have followed and fulfilled all the requirements stated above. Once done, proceed to the steps to install Android 8.1 Oreo Beta on Xiaomi Mi A1.

The unofficial TWRP-flashable build is available in a ZIP format. Thanks to sooti!

How to Install Android 8.1 Oreo Beta on Xiaomi Mi A1?

The flashing process will begin and would finish in a few minutes. Once done, press the ‘Reboot System’ button. Note that the ROM will be installed to both Slot A and Slot B.

People who have installed the ROM have confirmed that there’s still no Project Treble support present, even though early speculations stated otherwise. There is still some time before the stable update is rolled out to the general public, which will finally confirm if the manufacturer has actually implemented Project Treble. You can go ahead and try out all the features in Android 8.1 Oreo.

So this was our guide on how to install Android 8.1 Oreo Beta on Xiaomi Mi A1. If you have any questions in regards to the procedure, please let us know via the comments.