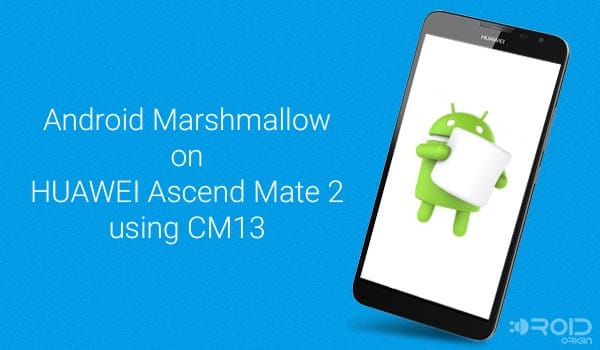 Ascend Mate 2, was a high-range Android smartphone by Huawei, released during 2014. The phone originally came with JellyBean 4.3 out-of-the-box and at most supported Android Lollipop 5.1. But currently, Cyanogen does not accept this fate and has recently released CyanogenMod 13 ROM for the Ascend Mate 2. So now, you can enjoy the sweet taste of Android Marshmallow on Huawei Ascend Mate 2 (Model: MT2L03).

The first nightly came out yesterday, so there are no bugs reported as yet. However, some bugs are expected, since this is the initial stage. CyanogenMod is a ROM, known for its features, and stability so doesn’t doubt on using it. Also, for now, CM13 is the only way to upgrade your Mate 2 to the latest Android update. And as far as the hardware configuration is concerned, the phone is definitely worth updating.

Install a custom ROM shall void your device’s warranty. We will not be held liable for any damage to your Huawei smartphone. However, we will surely help you if you come across any such situations.

The process was pretty simple and would install Android Marshmallow on Huawei Ascend Mate 2, within a matter of minutes. Once the phone has booted, complete the start-up setup and begin using CyanogenMod 13.

If you have any queries, drop a comment below, and we will do the best we can, to help you.