Want to try out the latest Android version and its features? Follow this guide to easily install Android Oreo on Honor V9 by flashing EMUI 8.0.0.315.

Several OEMs have already got their hands behind the desk to bring Android Oreo to their respective flagship devices. These include Sony, Samsung, LG, Motorola, and it seems like Huawei is not far behind. Rather, the manufacturer has been extensively testing Oreo for its top line of devices. Only users who are enrolled in the testing program can have access to the update. But now, any user can have access to it and install Android Oreo on Honor V9 DUK-AL20. 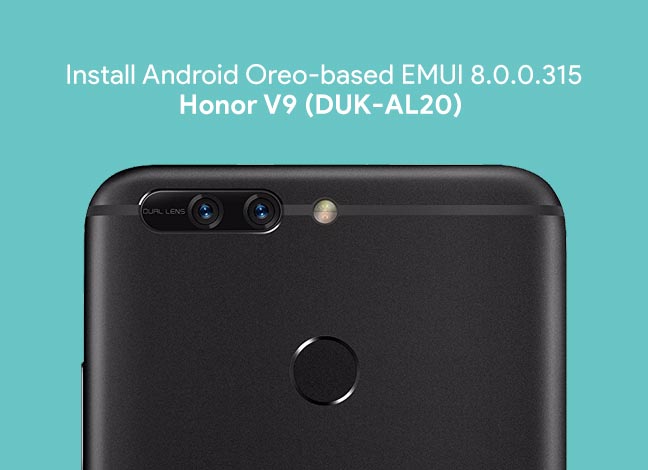 Check out more on Oreo:

The Oreo update is part of the new stock firmware version labeled EMUI 8.0, which will include all the new features with the added touch of proprietary Huawei UI and apps. XDA senior member – XN Logos has shared the Android Oreo-based EMUI 8.0.0.315 build for the users out there. The official changelog for which, you can check here.

There is still no news (officially) on when Huawei plans on releasing the update for the regular public. But, with this available build, we expect to see the update roll out soon enough. Anyways, until that comes, you can use this guide to install Android Oreo on Honor V9 by flashing EMUI 8.0.0.315 using TWRP.

Now, before you head over to the instructions, it is important that you fulfill all the requirements below.

The files and instructions below are specifically meant for the Honor V9, which is the international variant of the Honor 8 Pro. Do not try this method or the files on the Honor 8 Pro. You might end up bricking your device.

We will not be held responsible for any damage to your device whilst or after following these instructions to install Android Oreo on Honor V9. Although, we can assure that the method is confirmed to be working on the said device.

Your Honor V9 should now boot into the updated Oreo firmware. Go ahead and try out all the new features including Picture-in-Picture mode, Autofill framework, Background limit, Notification dots, Instant Apps, and more.

If you face any problems while updating your device using this method, then kindly reach out to us through the comments.