You might already know that the second Android P beta is now available for selected Android smartphones including the recently launched Nokia 7 Plus. In this tutorial, we will guide you on how to download and install Android P Beta on Nokia 7 Plus right now. The supported models include TA-1046 and TA-1055.

Google I/O 2018 brought in a lot of new stuff for Android. And one of the most interesting announcements of them all was the introduction of Android P Beta. Only that this time, it wouldn’t be limited to just the Google Pixel phones. Thanks to Project Treble, it is now possible to get Android P Beta up and running on a series of popular phones from different manufacturers.

From Nokia specifically, the recently released mid-range Nokia 7 Plus has received the due honor. One of the reasons behind it could be that the phone comes with Android One support. Anyhow, if you have got your hands on the phone, then you can easily install Android P Beta on Nokia 7 Plus using the instructions below. 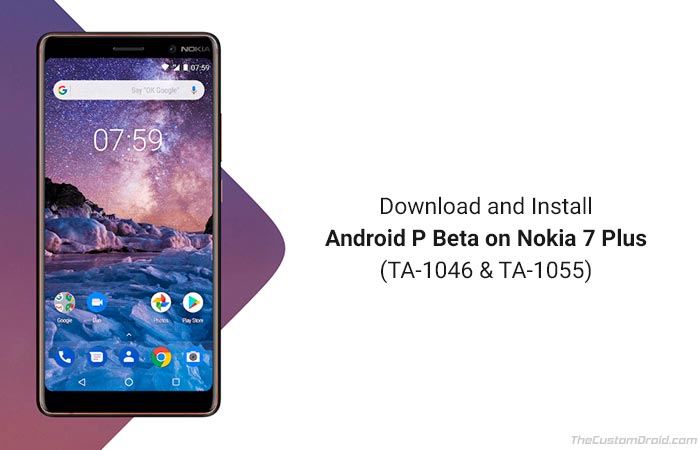 Android P Beta for the Nokia 7 Plus

The Nokia 7 Plus has launched just about two months ago and is already running up against some major mid-range phones like the OnePlus 5T. The phone is powered by a Qualcomm Snapdragon 660 chipset, a dual 12MP+13MP camera with dual-pixel phase-detection, and Zeiss optics, 4GB RAM, 64 Gigs of storage, and on top of all, comes with Android 8.1 Oreo (Android One) out-of-the-box. Thanks to Android One and Project Treble support, users can now enjoy the next major Android version on their phone.

In order to get Android P beta on Nokia 7 Plus, you will need to perform some additional steps, unlike the simple process followed for the Pixel phones. You will first need to validate your phone with Nokia and then sideload the provided OTA using the stock recovery. We have detailed everything below, so be out of worries. Before you even install Android P Beta on Nokia 7 Plus, let us take a look at some of the new major features that you’ll enjoy.

Below is the list of the major Android P features:

For more details, visit the official Android Developers Blog. Of course, the second developer preview also carries over all the features from Android P Dev Preview 1. This means, you also get the new Quick Settings design, improved notifications, new icons in the settings menu, revamped volume controls, and more.

Also, read – How to Get Android P Features on Oreo, Nougat, Marshmallow, and Lollipop

Now that you’re briefed about the features you would expect, let us move over to the instructions to install Android P Beta on Nokia 7 Plus. The process is split into two major steps. The first one will allow you to register your phone for the beta software and download the OTA ZIP. The second one will follow up with the instructions on how to easily sideload the Android P Beta OTA.

To install Android P Beta on Nokia 7 Plus, you will first need to register the device and download the OTA package. First, make sure to create a Nokia account, if you haven’t already.

Move the downloaded ZIP file (e.g. B2N-3050-0-00WW-B01-update.zip) to C:\adb, where the ADB and Fastboot binaries are present. Note that the filename of the OTA could be different for your phone.

How to Install Android P Beta on Nokia 7 Plus

When your phone boots, it shall be running the latest and upcoming Android version. So go ahead and try all the new features!

The Beta program will assist developers to get their apps ready for Android P. Non-developers or the regular users can contribute as well by providing their assessment in correspondence to the new features. Simply input and send your thoughts and suggestions via the feedback app on the phone.

So there you go! You have just been able to download Android P Beta for the Nokia 7 Plus and install it. The final release is planned during the third quarter (Q3) in 2018. Prior to that, there will be three more previews. So start exploring right away and let us know which ones of the new features that you like the most. Also, if you have any questions regarding the process, then please leave a comment.