This year’s Google I/O annual developers conference brought a lot to the table for Android devices. For instance, we saw some major improvements in terms of various Google services including 6 new voices for Google Assistant. But the major one of ’em all was the introduction of Android P public beta. That’s because the new preview software is now available for more OEM devices than just the Pixel phones. This has been made possible through Project Treble, which was introduced last year.

If you’ve not got the preview running on your devices yet, then don’t worry, because we have got you covered. The steps below will help you install Android P Beta on Vivo X21 and Vivo X21 UD. 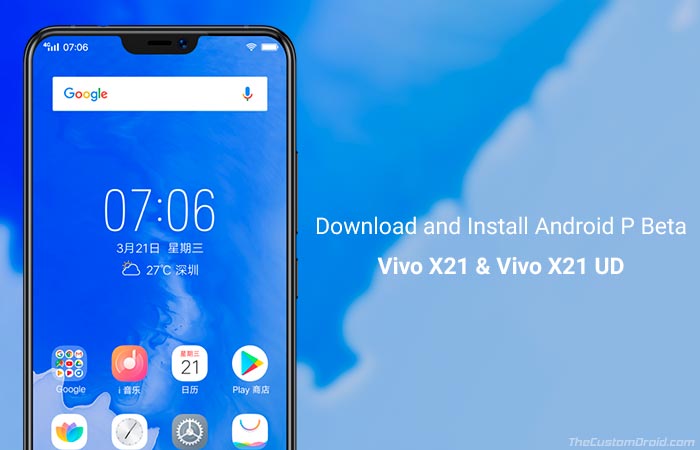 The Vivo X21/X21 UD is the latest flagship from the manufacturer. The phone comes with very thin bezels, fullscreen display, and an in-display fingerprint sensor (In X21 UD), which is the first in the industry. The phone also offers Android 8.1 Oreo out-of-the-box along with Project Treble support, which makes it eligible for quicker Android OS updates, just like this one. Before you even install Android P Beta on Vivo X21 and X21 UD, let us discuss some of the major changes that you can expect from this preview.

According to the official release notes and Android Developers blog, there are a lot of new features that will accompany all supported devices, including the Vivo phones. Revamped quick settings, smart replies in notifications, new icons in settings, Adaptive Battery, App Actions, enhanced audio with Dynamic Processing API, and new system navigation gestures are just to name a few.

Vivo has also outlined some of the known issues that you might face while using the developer preview.

So now, if the present issues do not bother you much, then you can go ahead and install Android P Beta on Vivo X21/Vivo X21 UD. Most or even all of the stated bugs would probably be fixed in the next developer preview.

The process would take a few minutes to finish. Once complete, the phone will be upgraded to Android P Developer Preview. Start by setting up the device by following the on-screen instructions. Once done, you will be able to enjoy the latest Android OS version on your Vivo device. According to the source, the next preview will be announced during June, which is next month. So stay tuned for more updates.

If you’re an app developer, then get your app ready for the upcoming Android version. Google has also provided clear instructions on migrating apps to Android P. If you’re a regular user, you can easily contribute to the development by providing your feedback and submitting bug reports here.

So, this was our guide on how to install Android P Beta on Vivo X21 and Vivo X21 UD. If you’ve got any questions regarding the process or the new software, then reach out to us via the comments.