With Android P already approaching the scene, OEMs are now gearing in quickly for the Oreo update on their supported devices. After the official release for Galaxy S8/S8+ and Note 8, Samsung finally turned over to the rest of the lineup that was earlier speculated to receive the update. Android Oreo for Galaxy Tab S3 not only brings the latest features on the slate but also the latest security patches. According to Sammobile, the update is rolling out over-the-air to the users in the UK. The rest of the regions are yet to follow. So, if you’ve not yet received the OTA or if your phone belongs to a different region, then follow the steps below to manually install Galaxy Tab S3 Android Oreo update. 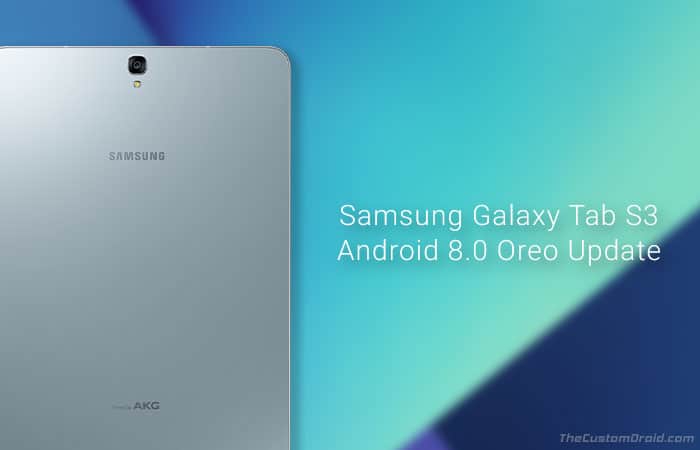 Samsung UK has been on its toes, as it was also the first on to roll out the Galaxy S7/S7 Edge Android Oreo update. The new firmware is available for both the WiFi (SM-T820) and LTE (SM-T825) models with build number T820XXU1BRE2 and T825XXU1BRE2, respectively. The tablet initially came with Android 7.0 Nougat when it was first launched. And after almost over a year of patience, the users can now upgrade their device to the latest Android iteration.

Before you even install Galaxy Tab S3 Android Oreo update, let us have a look at the new features that you could expect from it.

The new software version brings all the standard Android 8.0 Oreo features like Picture-in-Picture mode, Autofill API, notification channels, adaptive icons, and more. On top of that, there are several new features exclusive to Samsung Experience 9.0 such as Dual Messenger, lists view in Recent Apps, improved keyboard, new emojis/stickers, custom folder colors and much more. Apart from the visual and functional changes that we just mentioned, the update comes with April 2018 security patches. To add, the Galaxy Tab S3 now supports Dolby Atmos as well.

The process to manually install Android Oreo on Samsung Galaxy Tab S3 is pretty simple. All you have to do is grab the firmware package and flash it using the Odin tool.

Please ensure to fulfill all the requirements stated above before you install Galaxy Tab S3 Android Oreo Update.

For more detailed instructions, you can also follow our guide on how to flash stock firmware on Samsung Galaxy devices using Odin.

The flashing process will take a few minutes to complete, so leave the device undisturbed. In case the process doesn’t finish correctly, simply reboot your tablet in Download Mode and repeat the steps. When complete, the Galaxy Tab S3 will automatically boot into the upgraded OS. You may need to set up the device by following the on-screen instructions. Once done, go ahead and start exploring the new features that you just got.

We are not sure of when Samsung will rollout Android 8.1 Oreo, which adds even more features and improvements over the predecessor. So, this was our guide on how to install Galaxy Tab S3 Android Oreo Update. If you have got any queries regarding the update process, please leave a comment below.

More on Samsung and Android Oreo