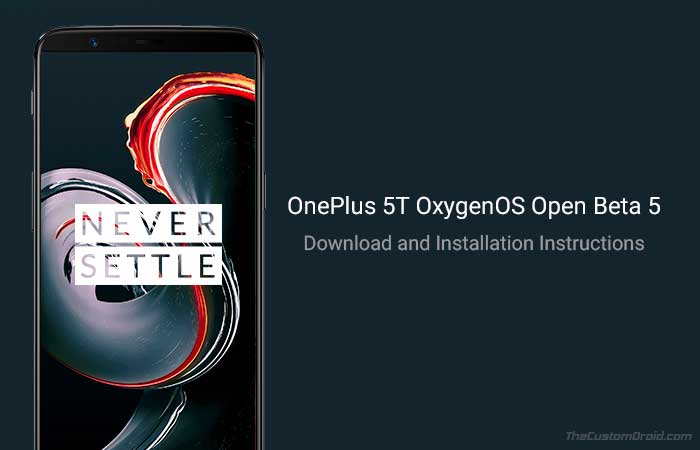 The latest beta software based on Android 8.1 Oreo is now available for the infamous 5T. In this post, we will guide you on how to manually install OnePlus 5T Open Beta 5 update right now.

OnePlus is one of the first few manufacturers who has started Android 8.1 Oreo development for its devices. It’s quite nice to see the on-growing Android OEM focusing on the demands of its users. The first Open Beta release based on Oreo 8.1 was announced a few weeks ago, for both the OnePlus 5 and 5T. And it seems as if the development has further geared in, fixing the discovered issues and polishing the framework before the stable release is available. So the company released another Open Beta software, which takes a step further. If you have not yet received the OTA, or want to shift from the stable channel to beta, then follow the steps below. The instructions will help you easily install OnePlus 5T Open Beta 5 update.

The announcement was made today at the OnePlus community by Beta Program and Dev Relations manager Manu J. The OTA is already rolling out to those who already are running the previous Open Beta 4 release and is approximately 215 MB in size. For users who are using the latest stable OxygenOS 5.0.4 build will need to manually install this Open Beta software.

Before we get to the instructions and install OnePlus 5T Open Beta 5 update, let us discuss what changes and improvements it brings to the device. Below is the list of changes as mentioned in the original release notes:

Several users have also found a new addition to the device settings, known as “Earphone mode”. The section handles various options that would work when the earphones are connected to the phone. These include an Auto Play that resumes music playback upon connection, notification ringtone mode in earphones, and more. 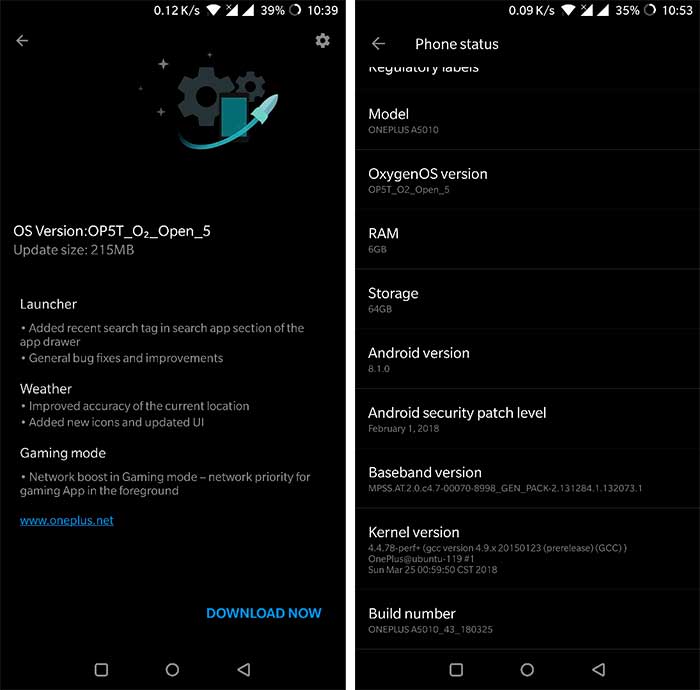 While the changelog may not look much but is surely a big improvement over the previous release. To check if your phone has received the OTA notification, go to Settings -> System update. In case you haven’t or if you wish to make the transition to the Beta channel, then follow the steps below to install OnePlus 5T Open Beta 5 update.

Once you have completed the requirements below, you can proceed ahead and install OnePlus 5T Open Beta 5 update.

We have provided two methods to install OxygenOS Open Beta 5 on OnePlus 5T. The first method is for those who have stock OxygenOS firmware and completely unrooted. Users with root/TWRP can opt for method 2. So choose the one that best suits your situation.

The easiest method is to use the ‘Local Upgrade’ option in the device settings. So simply download the OnePlus 5T Open Beta 5 full ROM or OTA ZIP and transfer it your phone’s storage. Once transferred, follow our extensive guide on how to install OxygenOS using Local Upgrade. Once installed, it is strongly recommended to wipe the cache using the stock recovery. To do that, follow the steps

If your phone is rooted or has TWRP recovery installed, you can use TWRP recovery to install OnePlus 5T Open Beta 5 update. Before you proceed, it is strongly advised to uninstall Magisk first by flashing the uninstaller ZIP file.

After your 5T boots, it shall be running the latest Open Beta software based on Android 8.1 Oreo. Go ahead and test out the new features like Earphone mode. The OEM is now one step closer to the stable OxygenOS rollout based on the latest Android version. We still haven’t seen anything for the OnePlus 3/3T yet. But it is expected to come out in future. You can further root OnePlus 5T on Android 8.1 Oreo using Magisk.

So this was our tutorial on how to install OnePlus 5T Open Beta 5 update using TWRP and Local Upgrade methods. For any queries regarding the procedure, post a comment below.