In past few days, We have come across several rumors about the LG V40, despite that its launch date is still a mystery. The phone has been spotted in a couple of leaked renders, giving us an early look at the phone’s design. Now, a new report from the AndroidPit website has disclosed the LG V40 spec sheet, revealing the full specification along with some key features.

According to AndroidPit, they were able to get the technical data sheet of the LG V40 from a source close to LG. As per the details shared by them, the LG V40 will not only have a triple rear camera setup, but also two front-facing cameras, making it the first phone with a total five cameras on board. 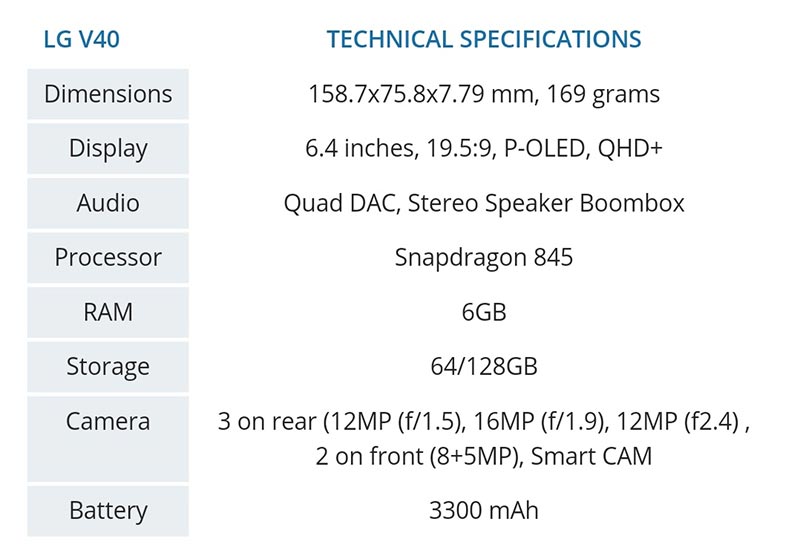 The LG V40 will be armed by an Octa-Core Qualcomm Snapdragon 845 SoC, consisting four cores clocked at 2.8Ghz and other four at 1.7GHz. The processor will be paired with 6GB of RAM and 64GB/128GB internal storage. In addition, the phone will be boosted by a same 3,300 mAh battery, like the LG V30.

In terms of camera department, the new LG V40 will have a triple rear camera setup. The camera configuration will include a 12MP (F/1.5) sensor with 1.4µm pixels, 16MP (F/1.9) sensor with 1.0µm pixels, and a 12MP (F2.4) sensor with 1.0µm pixels. The camera setup will be loaded with a telephoto and a wide angle lens. Furthermore, it will also be equipped with 2x optical zoom and feature some smart functionalities. In order to capture more clearer selfies, the LG V40 will have 8MP+5MP dual camera configuration.

The phone will be water and dust resistant with an IP68 certification. With an aim to achieve loud sound quality, the phone will be fitted with Quad DAC and Stereo Speaker Boombox. Though the information is limited at the moment, we’ll be keeping an eye out for any more leaks, rumors, and updates from LG. So stay tuned with us for further updates.