Lenovo-owned Motorola is speculated to working on two new Android One-based smartphones. Both the smartphones are rumored to be called Moto One & Moto One Power, that indicates these smartphones will be a part of the Android One program.

Today, one of the said phones – the Motorola Moto One to be precise, has appeared on TENAA along with some images and specs. TENAA is the inspection authority in China where all smartphones have to pass before they hit the shelves. According to the source, the model number of Moto One is XT1941-2. The provided images show the phone in a White color variant.

Moto One gets certified on TENAA; Leaked Images and Specifications

In terms of design, the smartphone looks very familiar to Motorola P30, launched a few days back. But there are some noticeable differences between these two devices. As per the details revealed by TENAA, the Moto One will sport a 5.86-inch HD+ (720×1520) display, unlike the 6.2-inch FHD+ display of the P30. The smartphone has vertically aligned dual rear cameras with a rectangularly shaped flash between the two sensors. It will measure a dimension of 149.9 x 72.2 x 7.9mm and weigh 162g.

The classic Motorola ‘M’ logo is also placed at the center of the back and it is rumored to be integrated with a fingerprint sensor, like of the P30. Looking at the images provided by TENAA, the smartphone will probably have a premium glass back with polished side frames.

According to the provided information, the Motorola Moto One will be powered by an Octa-core chipset, clocked at 2.2Ghz. A recent Geekbench benchmark test of this smartphone has confirmed the presence of Qualcomm Snapdragon 625 under its hood. The phone will allegedly come in 3GB/4GB/6GB RAM variants with 32GB, 64GB, and 128GB of storage space. 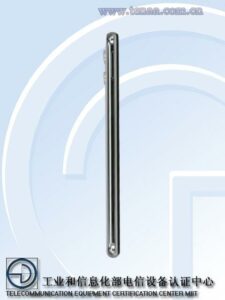 For photography, the smartphone will have a rear dual camera setup with a main 13MP sensor. In addition, it will have an 8MP front camera for taking selfies. The phone will be fueled by an unsatisfying 3,000 mAh battery, which we don’t think so can last long a whole day. Although Motorola has always claimed for longer battery life for all its smartphones over the past few years. Going through the details shared by TENAA, the smartphone will run on Android 8.1 Oreo out-of-the-box. However, being part of the Android One program, we hope it will be equipped with the latest version of Android when it hits the market.

As Motorola hasn’t officially revealed anything about their upcoming Android One based smartphones, we don’t know when the Moto One and Moto One Power will be announced. Stay tuned with us to get further updates about this smartphone.