Today, HMD has finally released Android Pie update for the Nokia 6. The new software comes as version 6.12H and packs a plethora of new features that will make your phone even smarter. Users with the Nokia 6 can upgrade their phone and relish all new features right now. As always the update is rolling out over-the-air (OTA) and is already available for Nokia 6 users in different regions.

The phone was launched in 2017 with Android 7.1.1 Nougat out-of-the-box and was later upgraded to Android Oreo back in 2018. Now with 2019, Nokia has brought a fresh new Android version for the Nokia 6 on the table.

Unlike some other Nokia smartphones that were able to run Android Pie Beta, the Nokia 6 didn’t receive any beta treatment. According to the roadmap shared by HMD CPO Juho Sarvikas, the OEM planned on releasing Pie for Nokia 6 (2017) in Q1 2019. And since the release is official now, it definitely seems like Nokia held by its words without making any delays.

Being a major Android version bump, Pie brings a lot of goodies to your Nokia 6. Starting off, we have the new gesture-based system navigation and a new Recent Apps UI that allows you easily switch between apps. Android Pie on Nokia 6 also comes with Adaptive Battery and Brightness that use the Machine-Learning technology to adapt to the user’s operations. Another feature using the same technology is App Actions, that predicts app-specific actions and shows them on the screen for quicker operation.

Nokia 6 on Android Pie also supports Google’s Digital Wellbeing app. It tracks your usage, and provides feedback and allows you to take action to curb your smartphone usage. Like that, there are a series of new changes that Pie brings to your phone, both visually and internally. For the complete list of Android Pie features bundled in this update, you can also visit the official Nokia website.

Last but not least, the update also brings the latest February 2019 Security Patches to the Nokia 6. This surely feels like a cherry on the top, well-done HMD!

According to the OTA notification received by the users, following is the changelog:

As always, HMD Global is rolling out the update in a staged manner. This is done to ensure that no bugs present in the update and in case there are, they can roll back the update. According to several Redditors, the update is now available in the following regions and for corresponding model numbers:

As we already mentioned, the new Pie update comes with software version V6.12H and is rolling out over-the-air. The OTA weighs 1.7 GB or 1720.2 MB to be precise, which is quite large considering that this is a major Android version transition from Android Oreo to Pie. So, it is advised that you use an unmetered WiFi connection to download this OTA update and save on your carrier data charges. 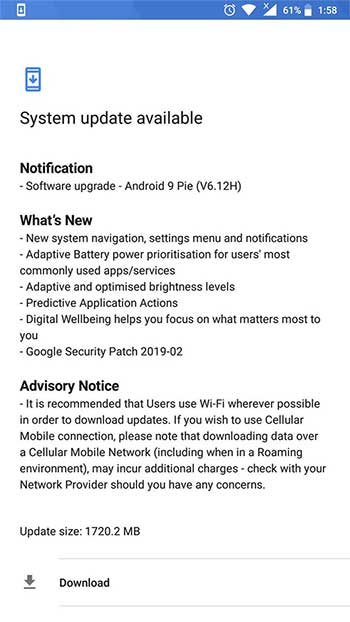 To manually check for the Android Pie OTA on your Nokia 6, go to ‘Settings‘ > ‘System‘ > ‘System update‘ and tap on the ‘Check for updates‘ button. If you have received the OTA on your Nokia 6 with a different model number and region than the ones stated above, then do let us know so that we can update the list.

Pie is definitely a treat for Nokia 6 users and according to the roadmap published, the Nokia 5.1, Nokia 3.1, and Nokia 2.1 should be next to receive this update.