After the successful launch of the Nokia 6.1 Plus (X6), and Nokia 5.1 Plus (X5) in India, HMD is again gearing for another launch. This time, a refresher for their upper midrange lineup.

HMD/Nokia Mobile is working on a Snapdragon 710 based device to be released in the autumn/winter 2018 timeframe. Codename is "Phoenix". Oh and btw, the Google SDM710 based device apparently is called "Bonito".

Earlier in June, renowned phone-leaker, Roland Quandt, reveals on Twitter that HMD is working for a new Nokia smartphone code-named “Phoenix.” The device is said to be one of the first smartphones to utilize the latest Snapdragon 710 Mobile Platform and could launch at IFA in Berlin. Unfortunately, other than that, the previous leak didn’t provide us with more substantial information. 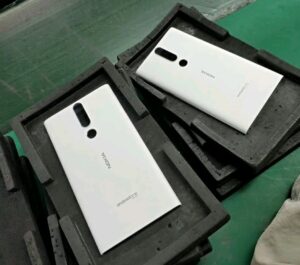 Now, just a week away before the event kicks off, a front glass panel which is believed to belong to the “Phoenix” leaks. Clearly, the front glass panel contains a notch. And while no Nokia logo is present (the other photo has but is mushy, and we can’t make up the Nokia logo) the back plates on other photos certainly shows. Others start speculating that the Nokia Phoenix, could, in fact, be the “notched” version of the well-loved Nokia 7 Plus, and will be called Nokia X7.

The handset is said to have a larger display, with a slightly taller aspect ratio. Thanks to the notch. The device will also feature a dual-rear camera (hopefully ZEISS) and a rear-mounted fingerprint sensor. The Qualcomm Snapdragon 710 will also power the device and might launch with a price at around $252. Other than that, no detailed specifications were revealed. At least now, we have given proper confirmation of its existence.