OnePlus is rolling out its stable Oxygen OS 5.1.5 update for the OnePlus 5 and OnePlus 5T. The latest software brings the August 2018 security patches. Post this upgrade, users can confirm the phone unlocks using the PIN without tapping the check button.

The OnePlus 5 and OnePlus 5T are still one of the mid-range smartphones in the market, which not only deliver great performance, but also premium build quality and an ever-strengthening software support. Despite the availability of the OnePlus 6, the OEM is still striving to provide up-to-date software for the said devices.

The announcement came directly from the OxygenOS community by Staff Member Manu J. The OTA is rolling out now and weighs about 1.6 GB, which is quite huge. According to release notes, this update carries two specific changes:

Of course, having the latest security update is important. But, OnePlus also packs another sweet little surprise with this update. OxygenOS 5.1.5 brings Project Treble for OnePlus 5/5T under the hood.  Earlier, Treble support was available via Open Beta 11/13 for the OnePlus 5 and 5T respectively. And now it’s available in the stable OxygenOS firmware.

Project treble enables the device to receive faster software updates. That’s not all as it will allow third-party developers to build their own custom Android framework. They wouldn’t have to wait for the vendor’s source code. We know how custom ROMs have become an integral part of Android these days.  Lately, all the devices that run Android Oreo out-of-the-box support Project Treble.

The latest stable OxygenOS 5.1.5 update is moving over-the-air and it will knock into the devices gradually. Since it is a staged rollout, the OTA will arrive for a couple of devices and will expand further in the coming days. To manually check for the update notification, go to Settings -> System Updates. If it’s available, download it immediately via Wi-Fi. Oxygen OS 5.1.5 for OnePlus 5/5T is a big update weighing around 1.6GB. So, using a Wi-Fi to download will help save your carrier data. 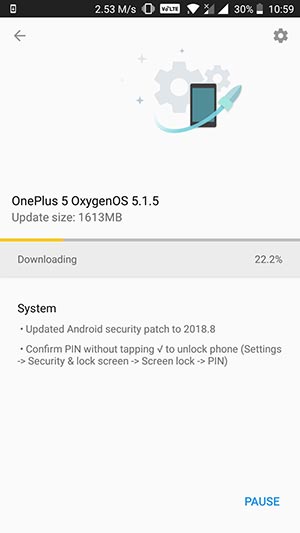 Project Treble is a big advantage for Android, which proves the worth of its open source nature. It also the broadens the ideas for customizing an Android device. So, do not miss the Oxygen OS 5.1.5 update. This stable OS will also fortify your devices with the latest August security patch. So, keep an eye out for the update.