Oppo has recently announced the Oppo R17, which will be the world’s first phone to be powered by Qualcomm Snapdragon 670 SoC. Along with the Oppo R17, Oppo is also speculated to launch Oppo R17 Pro that has just appeared on the Geekbench site.

Oppo R17 Pro will be powered by Qualcomm Snapdragon 710 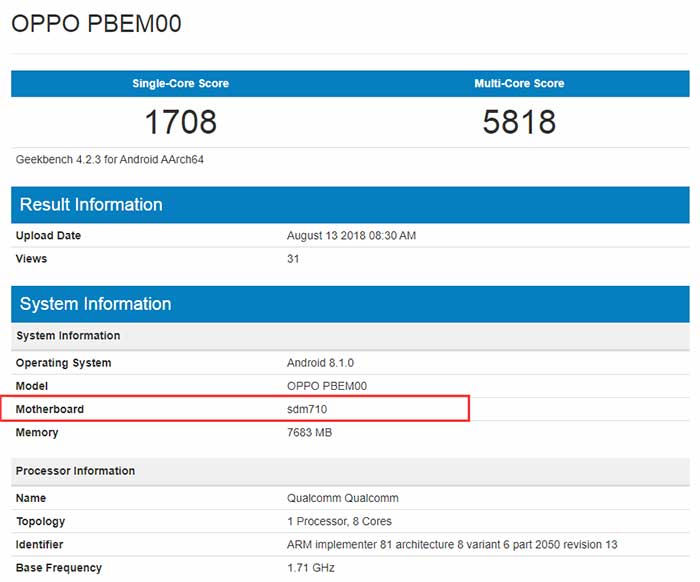 The smartphone passes the Geekbench under the model number Oppo PBEM00. As you can see in the image above, the smartphone will be powered by a Qualcomm Snapdragon 710 chip, which is one of the most powerful SoC for mid-range devices.  Just to remind you, the Qualcomm Snapdragon 710 chipset is coupled with Adreno 616 GPU and includes two cores of Kryo 360 Cortex A75 that clocks at 2.2 GHz and six cores of Kryo 360 Cortex A55 with a processing speed of 1.7 GHz. The Geekbench results show the phone running on Android 8.1 Oreo with massive 8GB of RAM.

As for the results, the Oppo R17 Pro has scored 1708 points in the single-core test while with the multi-core CPU, achieved a score of 5818 points. So overall, The scores are looking very good & competitive for a mid-segment device. We can say that this smartphone is capable to compete with other smartphones like Xiaomi’s Mi 8 SE or Honor play. 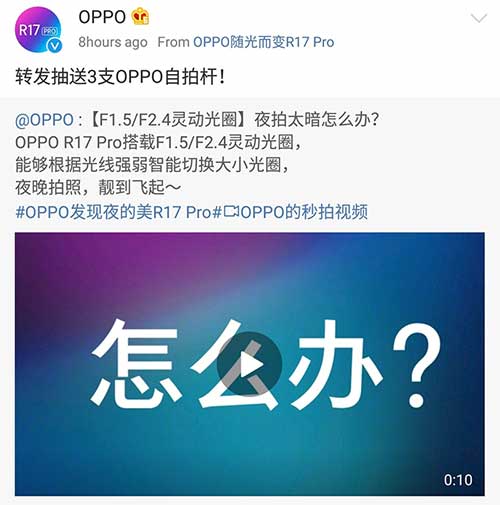 According to a Weibo post by Oppo China, Oppo R17 Pro will have a camera with a variable aperture, just like that of Samsung Galaxy S9 and Note 9. The weibo post states that Oppo R17 Pro is equipped with a smart aperture, that can switch the size from F/1.5 to F/2.4 according to the intensity of light to take a clearer photo at night. We also came across an official poster of this smartphone some days ago, that shows it will be equipped with a vertically arranged triple camera setup like the Huawei P20 Pro.

As Oppo has already announced the full specifications of the standard Oppo R17, just to remind you, the smartphone will have a large 6.4-inch display with a notch Oppo calls “waterdrop”. The smartphone will be powered by Qualcomm Snapdragon 670, coupled with 8GB of RAM and 128GB expandable internal storage. The device will come with a 25-megapixel AI selfie camera for more clearer selfies. It is worth mentioning that the smartphone will be equipped with a Light sense screen fingerprint sensor that Oppo claims can unlock the smartphone in a second.

The Oppo R17 will run on Oppo’s ColorOS 5.2, 3,500mAh of battery and support for VOOC fast charging. The device will carry a decent price tag at about 3,000 Chinese Yuan or 434 USD approximately. Color choices include a Stream Blue and Neon Purple. Stay tuned with us to get further updates!