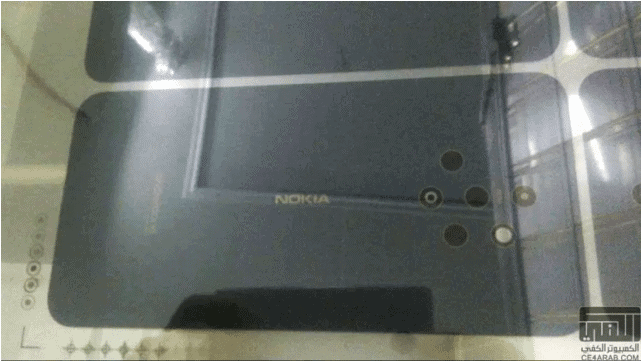 Nokia’s most anticipated flagship device has finally appeared on a photo. The device, which we thought is getting unveiled at the IFA 2018, will feature a Penta-lens camera and in-display fingerprint sensor. The setup is similar to that of Light, which is also rumored as Nokia’s partner in making the multi-lens technology happen.

The photo, though mushy, is enough to show us some hints to confirm its authenticity. It has the Nokia logo, aligned vertically on the middle, and the ZEISS, in between the top and the middle camera sensors. Closer look at the bottom and we can see what looks like an “Android One” logo and probably some HMD stuff. Looking at a full-body shot of the device, it looks like it wasn’t conforming to the 18:9 aspect ratio craze. This is only a prototype though, so things may have changed along the way.

For the specs, the Nokia 9 will run under Snapdragon 845, with either 6 or 8GB of RAM. The display will be a curved OLED one, measuring at 5.9-inch in stunning QHD resolution. What’s interesting though is the absence of the fingerprint scanner at the backplate. This could solidify the previous rumors that the Nokia 9 will deliver an in-display fingerprint sensor.

For the highlight, the alleged Nokia 9 was shown with 6 small holes at the back, with one dedicated to flash. This could confirm the long-time rumor of the Penta-lens setup that will take on Huawei’s P20 Pro. We still have no idea what’s in store for us. But with ZEISS behind HMD’s back, it will surely not disappoint.

Another exciting trip to visit our friends at #Zeiss to review progress, share ideas for the future and of course to visit the awesome museum! Btw. the museum is open for public, highly recommend ? @ZEISS_Group #nokiamobile pic.twitter.com/hX8cBH7nXJ

Last month, HMD CPO Juho Sarvikas visited the Zeiss HQ in Germany. On his caption, Sarvikas said that he visited Zeiss “to review progress, share ideas for the future”. This could mean that there is actually something in works. And that snapshot of the Lumia 1020 PureView description displayed on the Zeiss Museum could also be a hint.

Comment Policy: Comments are welcomed and encouraged. However, all comments are manually moderated and those deemed to be spam or solely promotional in nature will be deleted.