We have just got our hands on a leaked image that suggests that the next major Samsung flagship is near. Learn more about Samsung Galaxy S9 Specifications and get a clear idea of what you may expect from the upcoming Android device.

The next major S-series flagship is imminent, as so it seems from this leak. According to ZDNet, the S9 is expected to be announced next month at Mobile World Congress 2018, being held in Barcelona. The next-generation Galaxy S phone will aim at a much-improved user experience. Recently, Redditor minhvn leaked a rear image of the Galaxy S9 retail box.

We are quite not surprised to see this leaked. The image gives us a decent amount of information about the major highlights of the Galaxy S9.

Staring up top, the S9 will allegedly feature a 5.8-inches QuadHD+ AMOLED display with rounded corners. Also, the SuperSpeed Dual Pixel 12MP camera with OIS looks pretty familiar. The rear camera is 8 MP, sporting Auto-Focus Selfie Camera. The S9 comes with 4GB RAM and 64 gigs of ROM. These are pretty much the same as experienced on the predecessor – Galaxy S8. 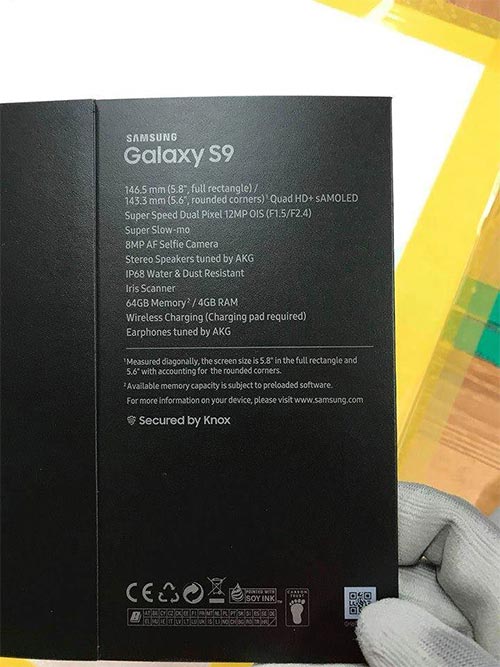 The box gives us a good idea of the Samsung Galaxy S9 specifications that are new. This includes the ‘Super Speed’ functionality in the primary camera. It also offers a ‘Super Slow-mo’ feature. We are unsure of the FPS that the S9 camera will be able to achieve. However, it does indicate something exceptional.

Galaxy S9 will come with IP68 Water and Dust resistance. Which means the device can stay immersed in water for 30 minutes up to 1.5 mt. On the sound aspect, the phone shall come with Stereo speakers and earphones tuned with leading AKG technology for an all-around sound experience.

Just like the predecessor, the S9 also supports an iris scanner which will allow you to unlock the device with just your eyes. It is often referred as one of the safest ways to protect your device.  Samsung will most likely be continuing with the wireless charging technology on the Galaxy S9.

There are yet no speculations of whether or not the S9 will come with Android Oreo out-of-the-box. But it seems likely that it should since the S8 came with Android Nougat. Support for Google’s Project Treble support is also expected if that’s the case.

So these were all the Samsung Galaxy S9 specifications that we were able to pick from the leaked image of the retail box. There is currently no news on how Samsung plans to compete against the current OEM Android phones like the Pixel 2, that holds its record for the best smartphone camera. We hope by the time the phone is announced, we will be able to get hold of more information.

Let us know your views on how the all new Samsung Galaxy S9 specs will prove to be better than its former version.