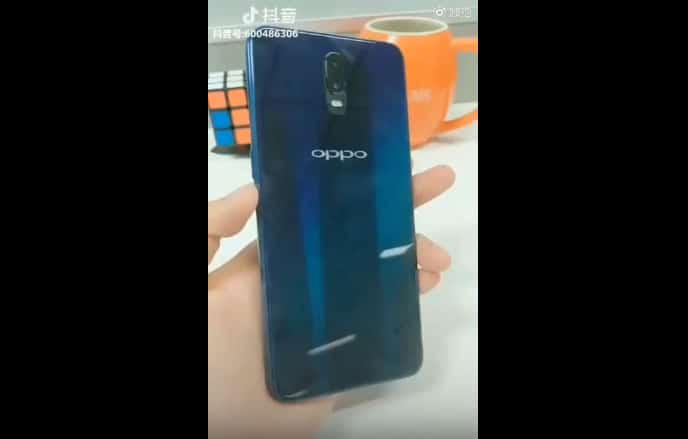 After the official announcement of Oppo R17,  the first hands-on video of the smartphone was uploaded on YouTube and shared on Chinese microblogging site Weibo.

Today someone in China has uploaded a thirty seconds short hands-on video on youtube with the Oppo R17, that shows off a live unit for the first time. Being able to watch the phone live, is much better than the renders. It gives us a clear insight into what the device actually looks like.

At this point, we are already familiar with the Oppo R17’s design since it was already announced by the company with its official press renders. As expected, the video shows off the phone with a small circular shaped notch, which Oppo calls “waterdrop”. It does make sense as it really looks like a waterdrop. It does have extremely thin bezels on the sides and a small bottom chin.

As per the Oppo R17 specs, it will offer a large 6.4-inch display with a really small chin, bezel-less design, and the ‘Waterdrop’ notch. The smartphone will be powered by newly unveiled Qualcomm Snapdragon 670 SoC, coupled with 8GB of RAM and 128GB  internal storage. The device will come with 25-megapixel AI selfie camera for more clearer selfies.

The Oppo R17 will run on Oppo’s ColorOS 5.2 based on Android 8.1 Oreo, 3,500mAh of battery and support for VOOC fast charging. The device will carry a decent price tag at about 3,000 Chinese yuan. Color choices include a Stream Blue and Neon Purple. Stay tuned with us to get any further updates about this smartphone and make sure to share your opinions in comments down below!