In recent years, the launch of Project Treble is among the most significant event surrounding the Android OS. It was released in 2017 alongside Android Oreo (8.1), with the objective to separate the Android Framework from vendor implementation. With this, every time a new Android OS version is launched, the OEMs and developers only need to work on the software component, whereas the lower base consisting of vendor code no longer needs to be updated that frequently.

The advantages of this are aplenty. For example, the user not only receives faster updates from the OEMs but in this specific case, it also makes several non-Google devices capable of running Android Q Developer Preview using the GSI. 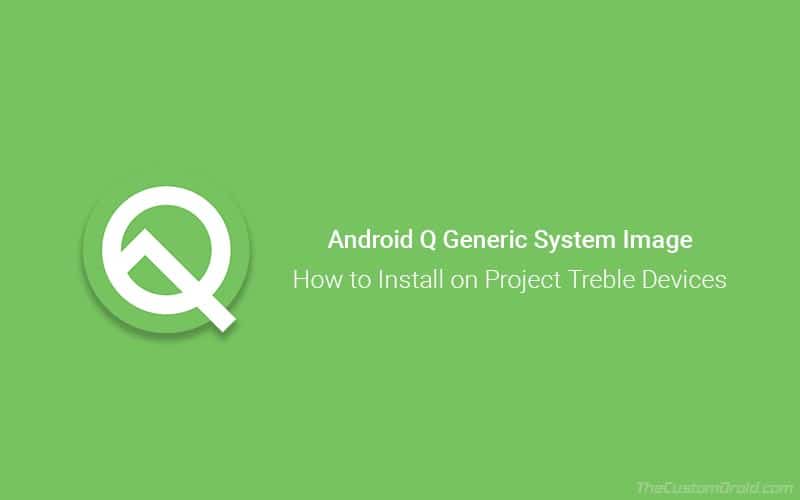 A Generic System Image or GSI is a pure Android implementation with unmodified Android Open Source Project (AOSP) code that any Android device running Android 8.1 or higher can run successfully. Installing this GSI on supported devices allow developers to test the new Android Q system with the Vendor Test Suite (VTS) and the Compatibility Test Suite (CTS) to ensure that the device implements vendor interfaces correctly with the latest version of Android. (Source: Google)

So, with the required knowledge in hand, follow the below guide to install Android Q Generic System Image on Project Treble Devices.

Android Q has not been made official yet and is still in the beta stage – even on Pixel devices. Expect it to have lots of bugs.

If you still want to go ahead, note that thecustomdroid.com or any of its members will take no responsibility whatsoever regarding any damage caused to your device by following this process. Proceed with caution!

Among the two GSI files for ARM64, if you want the core Google apps and services then download the ARM64+GMS (Google Mobile Services) version. Otherwise, if you would like to stick with the bare minimum, go with the ARM64 version.

Following are the issues that you might face (as mentioned on the official Android Developer’s blog):

Installing Android Q GSI on Project Treble devices may seem to be a complex procedure, especially for those users who are having very little knowledge regarding all these. As a result, we have split the guide into two steps. The first one checks for the Project Treble compatibility of the device. Whereas the second step lays down the instruction for installing the Android Q GSI file on your device.

So these were the steps to determine whether your device is compatible with Project Treble or not. If it qualifies to be so, then follow the second part of the guide below to install the Android Q Generic System Image on your device.

That’s it. We have successfully installed the Generic System Image on your Project Treble compatible device. If you tried this build and want to give feedback regarding the same or if you face any issues apart from the one mentioned above, use the official feedback section.

So this was our guide on how to Install Android Q GSI on Project Treble devices. If you have any doubts regarding the same, feel free to ask in the comment section below.