Sony has come up with a detailed graphical/informational representation to tell its users about how an Android Software Update rolls out, detailing its journey from start-to-end.

We often talk about software updates and we see many of them almost daily. Many of us even complain about how slow an Android manufacturer could be when it comes to bringing the latest software update to the devices. Say, for example, Android Oreo in this case, which was recently announced. The users expect the OEMs to deliver such software updates as soon as possible. But in this haste, we almost forget the time required by the manufacturer to adapt their proprietary code to the new software. Don’t get me wrong, I am neither in favor nor against the manufacturer or the users.

So, Sony has stood out and made a small step, showing how exactly an Android Software Update rolls out so that the users could understand the process. 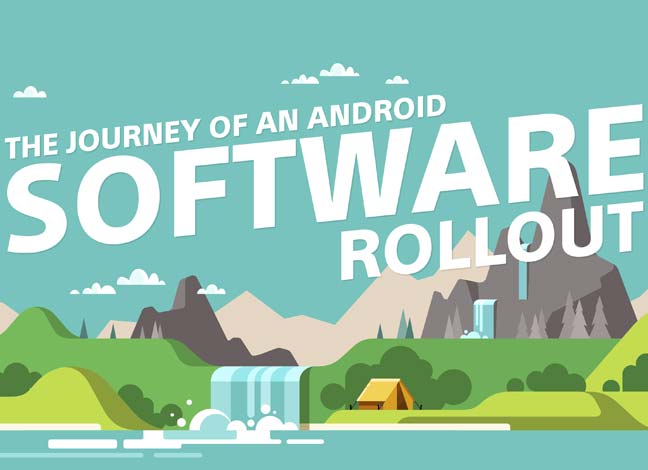 Sony has published an image representation of the complete process. Not only I will be showing it to you, but I will also try to engage myself fully to help you understand how the whole process goes and how an Android Software Update starts its journey. According to Sony, it is a 2-Phase process.

The infographic has been split into parts, to give you a step-by-step explanation.

The new Android version sets on its course directly from Google in the form of PDK (Platform Development Kit), which is basically the source code of the new update. This PDK is sent to the OEMs like Sony, a few weeks before the final release. It could simply not be the final code, residing all the fixes, improvements, and new features, but helps the manufacturer set up a foundation and start its testing process for the devices. This helps the company to speed up their development and process the final builds in a much shorter time frame.

Then, it slowly makes its way to the final release, for which Google pushes the source code. Manufacturers then adapt this code into their own proprietary system and the development takes a step further.

The third stop is HAL (Hardware Abstraction Layer) where the OEM gets their hardware chips and config to work with the latest software version.

In case the manufacturer doesn’t use the same hardware as that of Qualcomm, then it has to make its own way through the code and test every bit of functionality in the device. These include proper bootup, RIL services, audio, graphics, and everything else that a device is otherwise set to perform.

Now comes the Sony makeover, where the system is given the touch of Sony’s proprietary software. These include UI overhaul, lockscreen enhancements, and apps like Movies, Music, Camera, etc.

Then comes the final testing, which is carried out within the walls of Sony. Testers are appointed for the same, who provide appropriate feedback. The feedback then results in more fixes and optimizations that could be carried out on the software part. The company also conducts testing outside their own labs to get feedback.

Now comes the time for quality assurance and certification. The process of certification makes sure that the developed software is on point for quality and performance, meeting standards of the Wi-Fi and Bluetooth technology. Post the certification, the final build almost set to roll out, but there’s just one more thing.

A few operator partners might require a special version of the final software to be delivered on their ends. These operators then assist the OEM in regards to testing and final reshaping of the special version.

After all the phases of development, continuous testing, certification approval, and carrier (operator) involvement, the Android Software Update rolls out to the OEM devices.

The process doesn’t end there. The time frame between the final release and PDK arrival of the next upgrade, the company gives time to customer support. The process is carried out over voice calls in assisting customers, community forums, and social media.

And, that is how an Android Software Update rolls out to the public. It goes through various stops and dedication of developers and the manufacturers.

Wait, Sony is Not the Only One

A few years ago, in 2013, the famous Android manufacturer – HTC, came up with a similar infographic. It details every step of how an Android Software Update rolls out.

The representation for HTC is rather more detailed but could be confusing at the same time for end-users.

Indeed, we realize how much work and time an Android OEM requires to walk through this update process. And we appreciate them for it. Of course, there might be some OEMs that you may not be happy with (Cough..Samsu..), so share your experiences with us. How do you feel about your device’s update schedule, is it on time or does it need significant improvements. Comment below and we would love to share our own experiences too.