Google has pushed an update to the Google Phone app that brings significant Material interface changes. You can now download Google Phone v23 with the new Material Design theme.

Google App updates are mostly about better functionality and performance. It’s not every day that a certain Google app receives a change in the design. All of them mostly look alike with a Material design. Although recently, Google has started focusing on colors to bring uniqueness to each app/service. We recently published a post on the Google Contacts 3.0 update that comes with a refreshed Material design UI. And users already started asking whether and when other apps will receive the same design-wise changes. So to add to the list, today, the tech giant has released Google Phone v23 that also comes with a lot of similar changes. 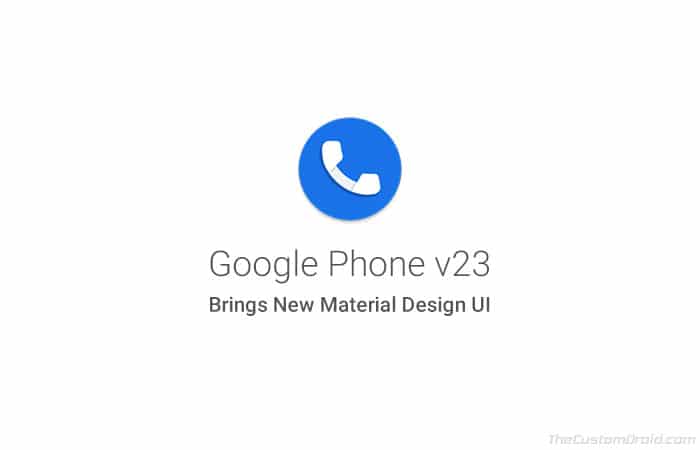 Just like Google Contacts, there are no functionality changes in this update. Everything is right where it was, no new options, functions or anything. The only changes that could be discovered, are in terms of the design and refreshed visual elements.

So, when you run the updated Google Phone v23 app, you will notice that the blue-color background of the top-bar is now replaced with plain white. And the contacts search bar now has curved edges with shadow. The pink colored circular dialer icon is now replaced with light-blue. Also, contacts with no profile pictures now look bright.

Next, the card-style listing under the recent calls list is now removed. The dialer screen itself hasn’t changed a bit. Although, the in-call UI now offers a plain white background with grey buttons, unlike the previous dull-looking dark blue background with white buttons. The font within the app’s interface has been completely replaced with Google’s Product Sans. 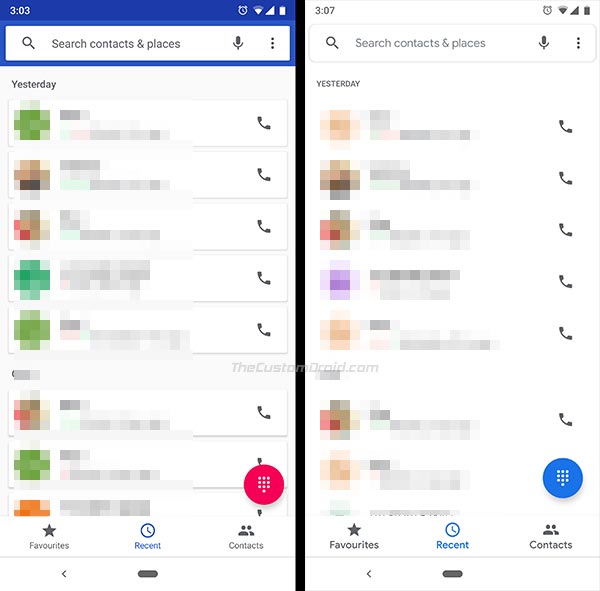 Last, but not the least, the Google Phone app’s icon has been tweaked as well. The darker-blue background is replaced with the lighter shade to match the overall color scheme, along with a smaller phone with a slight shadow.

Google has already started pushing this new version to the users via Google Play Store. To force check for the update, simply open the Play Store, tap on the menu icon and select “My apps & games”. Then simply press the refresh icon to check for the update. If for any reasons, you’re not able to update from the Play Store, or you’d like to update manually, then you can simply download the APK from the link below. The new version number is 23.0.208225343 beta.

Once you have been able to install Google Phone v23, you can launch it to experience the all-new and possibly better Material Design. There’s no doubt how significant difference a few little visual tweaks can make. The updated material theme (Also referred to as “Material Design 2.0” unofficially), has definitely bought some very nice changes to the app.

With Contacts and Phone apps marked up the list, we think it will be the stock Messages app that will receive the same treatment in coming days. What’s your opinion about it? Do you like the new Material Design to be better than the previous one? Let us know in the comments below.