Android 9 Pie officially came into existence a few days ago. You can now download and install Android Pie on Redmi Note 4 unofficially using the AOSP 9.0 ROM.

For months, we have been using and testing Android P (now called Android Pie) via the developer preview builds. The official update is already available for the Google Pixel series and Essential Phone. Other OEMs like Huawei, Sony, and HTC have already announced which of their devices will receive the update soon.

In the meantime, developers at XDA have grabbed the opportunity to compile and share Android Pie from the official AOSP source code. This enables users to get the latest version on their device(s) right now, especially if the device is not going to support the update all. The good news is that you can now install Android Pie on Redmi Note 4 by flashing the AOSP 9.0 ROM. 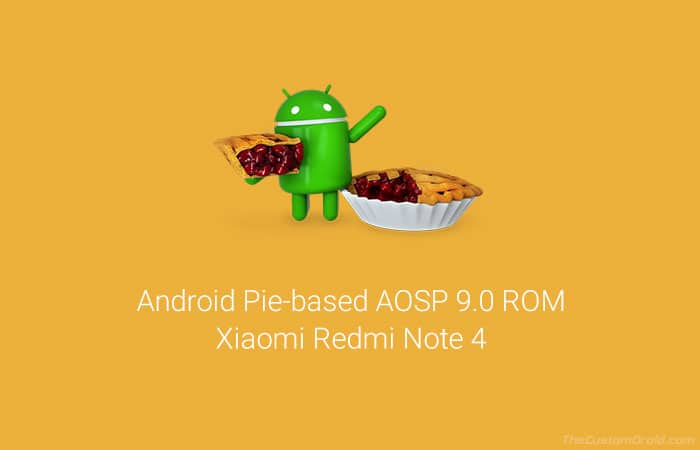 XDA Senior Member abhishek987 released Android Pie for Redmi Note 4 unofficially. The custom ROM, known as AOSP 9.0 ROM is probably the most stable build we have seen for any unofficially supported device. According to the official release thread, there are currently no issues/bugs present, which certainly means that you can use it as a daily driver.

Android Pie has its edge over the previous versions, as it provides a lot of new features and improvisations. Some of the major features include Gesture-based Navigation, Adaptive Battery, App Actions & Slices, revamped Quick Settings and device settings, smart replies in notifications, and more. Once you install Android Pie on Redmi Note 4, you shall be able to enjoy all the new features.

Since the ROM is based on the official AOSP code, it does not include any other modifications or tweaks like on a regular custom ROM. But if you wish to add some extra goodies, you can always install Magisk and use the available modules for that purpose.

Also, note that this is not an Android Pie GSI port that we discussed earlier, but a regular build compiled from the official source code. Thus, installing it won’t be a hassle at all. There are a few requirements though – (1) You must install Treble-enabled TWRP recovery on Redmi Note 4, and (2) You must follow the flashing instructions as laid down by the developer. Failing to deviate from the instructions might result in the Setup Wizard force closing.

When your Redmi Note 4 should then boot into the stable Android Pie-based AOSP 9.0 ROM. You should now able to enjoy all the new features and visual changes on your device.

We appreciate XDA Senior Member abhishek987 for his hard work and time in compiling the ROM for this device. So, you have just been able to download and install Android Pie on Redmi Note 4 unofficially. If you have any questions, please leave them down in the comments.