You can now get Android Pie on Treble-enabled devices powered by a Snapdragon processor. Follow this post to download and install Android 9 Pie GSI (Generic System Image) on Project Treble devices.

Project Treble was released back in 2017 along with Android Oreo. It is certainly one of the most significant low-level change in the OS. The idea behind the new re-architecture is to separate the Android Framework from the vendor implementation, thus enabling faster software updates for supported devices. It is also the reason why several OEM devices became the first non-Google phones to receive the Android P Developer Preview. Not only that, the Android development scene has seen a lot of progress ever since. Today marks another success story of Project Treble and its benefits for custom Android users. Thanks to the wonderful XDA community, you can now download Android 9 Pie GSI and install it on Project Treble devices with a Snapdragon SoC. 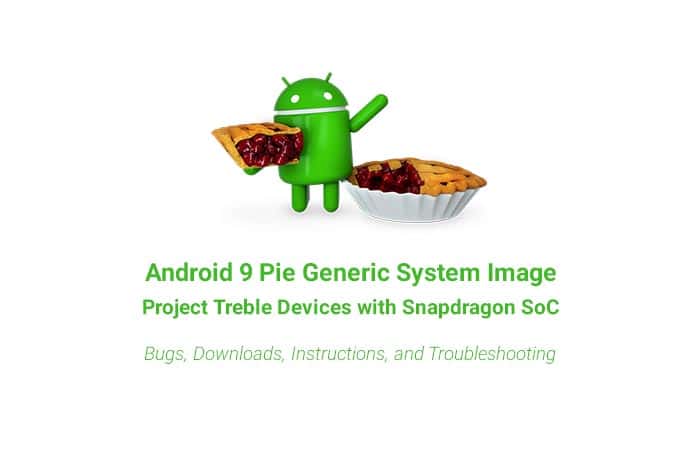 About two months ago, a developer from the XDA community ported Android P Developer Preview for Moto Z. It was a huge success and device owners were able to enjoy the new features. The same developer – erfanoabdi, has now ported and released an Android 9 Pie GSI for Project Treble devices. What’s worth noting is, like the former, the new Generic System Image is not compiled from the official source code. It is rather a modified port of Android Pie system image from the Google Pixel XL, also known as a “Semi-GSI“. Which also means that it also doesn’t follow the regular instructions to install a GSI on devices that support Project Treble.

According to the official XDA thread, it seems like VoLTE is not supported for now. Users who have already installed it have further reported several issues with the normal working as well. For instance, OnePlus 5/5T does not support MTP, ADB commands, and fingerprint using this port.

For now, the list of devices that support Android P Beta officially includes OnePlus 6, Mi Mix 2S, Essential Phone, Oppo R15 Pro, Vivo X21 (UD), and Nokia 7 Plus. But now, Android Pie Generic System Image will enable Project Treble supported devices with Android 8.1 Oreo to run the latest developer preview (Beta) of the upcoming Android version. Another member on the forums (harsinghal) provided the list of devices that were currently able to boot the Android 9 Pie GSI. The list is as follows:

Please note that some of the devices listed above have received support from Project Treble unofficially. Which means you will first need to install a dedicated ROM that supports Treble and then install Android 9 Pie Generic System Image on it. Other devices including the OnePlus 5/5T, which recently received Project Treble support via Open Beta software require some special instructions (Look at the troubleshooting section).

Once you have fulfilled the requirements above, go ahead to download and install Android 9 Pie GSI on Project Treble devices with Snapdragon SoC.

The port is currently only available for devices with ARM64 architecture and A-only/AB partition systems.

How to Install Android 9 Pie GSI?

So, you have finally been able to install Android 9 Pie GSI on Project Treble devices with Snapdragon processor. When the phone boots, it should be running the latest Android version and you can start exploring all the new features.

We have been able to gather some steps for troubleshooting issues on certain devices running this semi-GSI. Please read the section below if you face any issues/bugs.

Make sure to check the device-specific wiki page if you face any problems.

Porting the Android P Developer Preview is not an easy task, especially when you’re targetting different OEM devices at once. The effort gone into this project is really more than we can imagine. So, we thank ‘erfanoabdi’ and all the developers who have contributed to this project.

It is quite possible that you might face some issues and even the basic functioning of the device could be affected. Considering the nature of this port, it is not meant for daily usage, at least not yet. It is available for the users who are utterly keen on trying all the new Android P features. If you face a problem, please report it on the original XDA thread linked below.

So, this was our tutorial to download Android 9 Pie GSI and how to install it on Project Treble devices with Snapdragon processor. Should you have any questions before trying this port or semi-GSI, please feel free to leave a comment below.