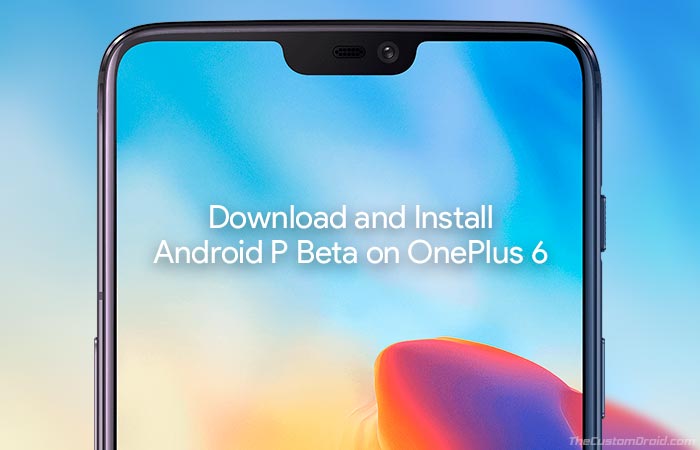 Google announced the Android P Developer Preview 2 recently. Here’s how you can install Android P Beta on OnePlus 6 right now. The instructions below will help you download the developer preview ROM and install it on your phone using the Local Upgrade option.

OnePlus unveiled its 2018 flagship killer yesterday during an event held in London, England. The OnePlus 6 literally marks another milestone for the company and carries over some of the smartphone trends that we have seen in the market. For starters, the phone sports a bezel-less 6.28-inches OLED display with a notch at the top. While the body dimensions haven’t changed much compared to the predecessor, the bezels are now even thinner with a high 83.8% screen-to-body ratio. Powered by the Qualcomm Snapdragon 845 chipset and dual 16MP + 20MP camera setup, the OnePlus 6 comes with Android 8.1 Oreo in the form of OxygenOS. The phone will soon be available on the market in upcoming days. If you’re keen on running the upcoming Android OS on your newly bought phone, then follow the instructions below to install Android P Beta on OnePlus 6.

Even before its launch, Google announced that the OnePlus 6 will be eligible for the Android P beta, which was also announced for several other OEM devices. All this has been made possible due to Project Treble, which totally separates the Android framework from the vendor code. If you’re eager for trying the new software, then follow the steps below to install Android P Beta on OnePlus 6. Now before you even do that, let us take a quick look at the new features that you could expect from the developer preview.

Some of the major Android P features include:

For the complete list of functional changes and features, visit the official blog post on Android Developers Blog.

That’s a lot for one release, right? Well, Google does believe in providing a better user experience with every major Android release. And this one seems no different at all. Before the public release in Q3 2018, there will be 3 more previews that you’ll get to test. So without any further delays, move on to the instructions below and install Android P Beta on OnePlus 6.

The method is simple and unlike a few other OEMs, you wouldn’t need to go through the hassle of registering your phone. All you have to do is, download the Android P developer preview ROM and install it using the Local Upgrade option in the settings.

How to Install Android P Beta on OnePlus 6?

The phone will automatically reboot and upgrade the OS from the official stable version to the Android P developer preview version. Once your phone boots, it is necessary to perform a factory reset via stock recovery. To do so, simply power off the phone and then hold the Volume Down and Power button to enter recovery mode. Go to Wipe data and cache and select Erase everything.

Finally, reboot the phone and set it up by following the on-screen instructions. The new OnePlus flagship killer is the first phone from the OEM that has been enrolled in the Android Beta program. So, you have just succeeded to install Android P Beta on OnePlus 6. If you have any questions regarding the process, then leave a comment below.