OnePlus brings Project Treble support for 2017 released OnePlus 5 and 5T via a software update. You can now download OxygenOS Open Beta 13/11 update for OnePlus 5/5T and install it using the instructions in this post.

Ever since its announcement last year, Project Treble has been one of the most influential factors for newly released Android phones. According to Google, every device that ships with Android Oreo or above must support Project Treble, without any exceptions. But what about the existing phones? Well, it is majorly up to the manufacturer itself. However, several Xiaomi devices have received unofficial support too. Anyhow, it seems like OnePlus has been listening to the demands of its users pretty closely. With the latest OxygenOS Open Beta 13/11 update, the manufacturer brings Project Treble support for OnePlus 5/5T. 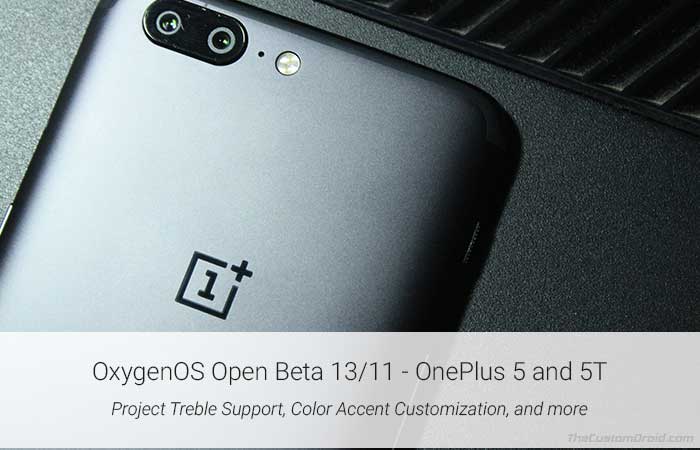 Despite the presence of the company’s latest flagship – OnePlus 6, the developers are paying a lot of attention to the devices released during the last year. Both the OnePlus 5 and 5T have been receiving constant software updates via Stable and Open Beta channels. This month, OnePlus has decided to surprise the users with a rather major feature inclusion. So before we head on to the instructions to install OxygenOS Open Beta 13/11 on OnePlus 5/5T, let us take a look at this specific new feature and the rest of the changes.

The announcement was first made at the official OnePlus community by staff member Manu J. The official changelog as stated on the release thread is as follows:

As you can see, there are two major inclusions in this very update. First and foremost is the support for Project Treble. The developers have most likely utilized the unused space to create a separate vendor partition. This means a great benefit for an end user, both officially (Faster software updates) and unofficially (Faster ports of upcoming Android versions, Generic System Images of famous custom ROMs, and more). 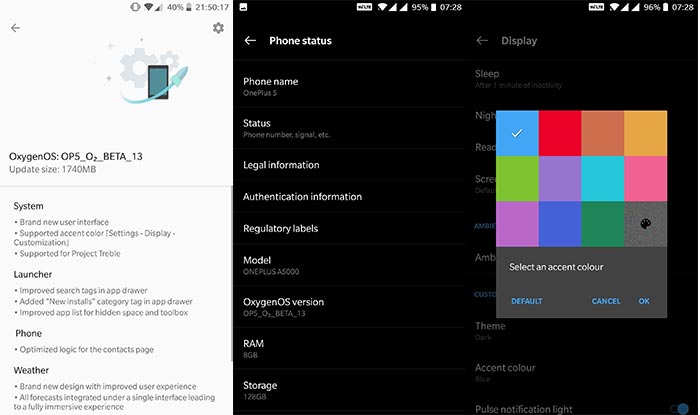 Next, you can also see that OnePlus has finally added a degree of theming controls for the users. With OxygenOS Open Beta 13/11 update for OnePlus 5/5T, users can easily customize the accent color of the user interface. Apart from these, you will also see all the changes noted above.

Now, the update is rolling out over the air for those running the previous Open Beta. To check, go to Settings -> System updates and press on the ‘Check For Updates’ button. However, if you have not received the OTA notification or want to manually install OxygenOS Open Beta 13/11 on OnePlus 5/5T, then the instructions below will help you.

As always, there are two different methods to install OxygenOS Open Beta 13/11 on OnePlus 5/5T. Method 1 allows users with stock OxygenOS software to use the Local Upgrade option. On the other hand, Method 2 will help you flash the update using TWRP recovery. Depending on the current condition of your device, choose the method that fits.

The easiest of the two methods is to use the Local Upgrade option in the Settings to flash the update. So, start by downloading the OxygenOS Open Beta 13/11 full ROM ZIP. Once downloaded, follow our simple steps on how to install OxygenOS using Local Uprgade.

After the installation is complete, make sure to wipe the cache using stock recovery. To do so, boot into stock recovery and go to ‘Wipe data and cache’ > ‘Wipe cache’ and press ‘OK’ to clear the cache. This shall prevent any unusual bugs from popping up.

When the flashing process finishes, tap on the ‘Reboot System’ button.

Method 2 will completely unroot your phone and also remove TWRP recovery. Should you wish to maintain root, then simply flash Magisk and TWRP recovery image before booting. You can also go through our dedicated tutorials, as linked below.

When the phone boots into the OS, you shall be running the latest Open Beta software with Project Treble support, new color accent customization, and other features/changes as listed above. It is likely that once the bugs are squashed, the stable update will roll out soon with the same features.

So, this was our guide on how to download and install OxygenOS Open Beta 13/11 on OnePlus 5/5T. If you have any questions, leave them down in the comments.