Since the release of Android Nougat, the upcoming Nexus devices had set out their rumors, and so the new Nexus launcher app was unofficially available. Lately, Google officially declared that Pixel devices will be overtaking the Nexus lineup and the news came up from LlabTooFeR @Twitter, tweeting about the Google’s new Pixel Launcher, along with some screenshots and download links. So here we are to talk about it and help you download Pixel Launcher and install it on your device.

This is the first time that the stock launcher has been revamped to an extent, leaving the old-school dock and app drawer button. This makes it even more interesting and may be you will no more need a 3rd-party launcher.

The dock has been redesigned with a white translucent shade behind the icons. The app drawer button has been kicked out of the dock and there’s a new and even cooler way to open the drawer. To do just that, swipe-up the arrow located right above the dock. Another notable feature is the Google Search bar on the homescreen that has been moved to the left edge of the screen, along with the Date and Day widget. The new wallpaper picker includes a lot of new wallpapers with the ability to change wallpapers daily.

Overall, the launcher’s fluidity has taken a boost with some cool features that you might see in the upcoming Google Pixel devices.

From the previously leaked Nexus Launcher, the new Pixel Launcher shows an increment to the version number, which is 7.1-3231428. No doubt, it indicates that the upcoming Pixel smartphones will feature Nougat 7.1. 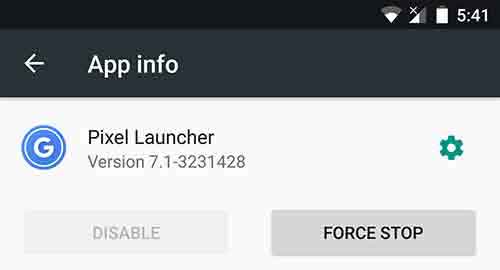 Download Pixel Launcher and wallpaper picker from the link below. Install both the APKs using a File Manager application.

Do note that if you want Google Now launcher pane to work, you will need to install the apps as system apps. This will require you to have your device rooted.

We love the new launcher and can’t wait for Google to officially announce it. Also, the new Pixel devices are going to be a fresh concept, where Google is aiming at the device’s hardware. What are your thoughts? Drop a comment down below.