FOSSAPPS is a Magisk module that lets you install free and open-source alterntives for Google Apps on Android devices. In this post, we will be talking about FOSSAPPS, why you would want to use it instead of GApps, and how to install it on any Android device rooted with Magisk.

With privacy being of utmost concern, Android users often worry about the type and amount of their personal data that is being sent to Google.

While Android itself is open-source, most pre-installed apps found on a majority of devices are proprietary software of Google. Google Apps are pretty great, not just because they fulfill the purpose very well, also because they sync with each other to form one complete ecosystem.

But when you choose to use them, you also give Google complete control over your personal data.

One of the best ways to take control of your data is by installing a custom ROM. Most Android custom ROMs come without any core Google Apps pre-installed and users would often need to install the GApps package seperately to get them back. But if control and privacy is your concern, you might just want to skip GApps and opt for open-source app replacements via FOSSAPPS.

FOSSAPPS (An abbreviation for “Free and Open-source Software Apps”) is a Magisk Module that installs open-source equivalents of various Google Apps on Android devices. It is developed by community developer Jack Sam (u/Wacko1805) who recently introduced the module over at Reddit.

According to the developer, the FOSSAPPS module installs the following open-source applications on your device. We have further added relevant information about the Google apps these can replace.

It’s worth noting the module will not automatically delete the existing Google Apps from the /system partition and replace them with the open-source apps listed above. This is something you’ll need to do on your own through a module like Debloater or via ADB. The dev does mention that this is a feature he does plan on adding in the future.

Unlike a GApps package, the FOSSAPPS module doesn’t need to be installed right after the ROM installation. You can install and remove it as and when you wish.

The module also includes and installs all the components of MicroG (GMSCore, GsfProxy, UnifiedNlp, and mapsv1) with it. This ensures that apps that rely on certain Google core services will still work if you completely decide to remove all Google Apps and services from the device. This is a feature I really like personally.

A Short Q/A Session with the Developer

I recently had quite a fun chat with Jack (the developer of this module) and asked a couple of questions about FOSSAPPS and his future plans regarding it.

It was really cool of Jack to answer them for us. Here’s how it went:

Dhananjay: What’s the basic idea behind this project?

Jack: I came up with the idea when I was trying to install FOSS alternatives to Google apps. Trying to find and install many FOSS apps gets very annoying over time, so I just made a simple module that installs multiple FOSS apps onto a phone.

My module does include MicroG so users can install apps that require google services.

I guess the basic idea is to get as many Google app alternatives that are free and open-source and compile them into a module that’s easy to flash and doesn’t mess with the system files as much as GApps does.

Dhananjay: If I am not wrong, you’re working on adding an option to automatically replace the stock Google apps, correct?

Jack: Yeah I am. It will be quite far in the future, as I want to get a better list of apps than I already have, and then I will work on replacing the system apps.

Dhananjay: Apart from FOSSAPPS, have you been working on any other projects? Or were there any past projects that would be worth looking into?

Jack: Yeah, I have the complete opposite of FOSSAPPS, Pixel-fy. It’s a bunch of different mods to get Google Pixel only features on a non Pixel Device

Now that you know what the module is and what it does, let’s move on to the installation.

How to Install Open-Source Alternatives for GApps using FOSSAPPS

Since FOSSAPPS is a Magisk Module, it goes without saying that your Android device must be rooted with Magisk. If you are yet to root, you could follow our Magisk installation guide or find your device-specific rooting tutorial in our database.

If you’re familiar with using modules, you could grab it directly from the official Github release page and install it via TWRP or Magisk Manager itself. But if you’re new to it and need some guidance, just follow the steps below to install FOSSAPPS using Magisk Manager.

The first step is to download the Magisk Module itself. The developer provides four versions of the FOSSAPPS module, as follows:

So, begin by clicking the link below and download the ZIP file of desired version of the FOSSAPPS module to your device.

If you’re going to download the module on your computer, make sure to transfer it to your phone’s internal storage. You can place it anywhere as long as you can easily locate it.

The module itself hasn’t been submitted to the official Magisk repository and so, you’d need to manually install it. To do this, first launch the Magisk Manager application on your phone. Then, press the “Modules” icon on the bottom navbar (the one to the extreme right) and select the “Install from Storage” option. 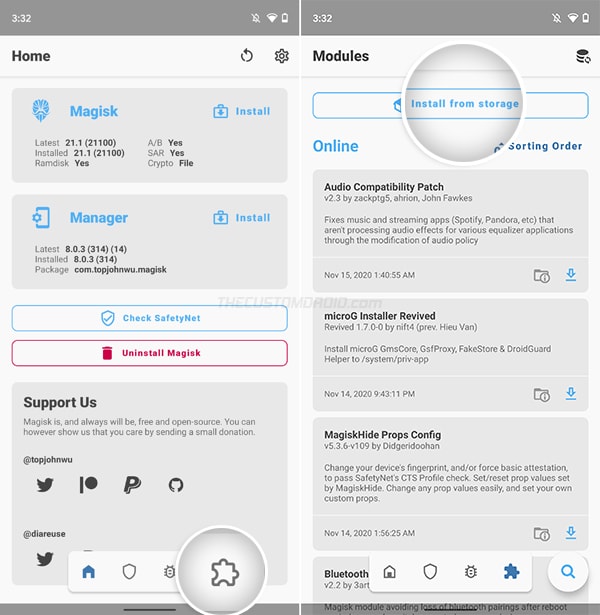 The file selection window will open up and display the downloaded files on your phone. If you have put the module somewhere else on the storage, then navigate to the location. The window will automatically grey out the files that are not in a compatible format (not .zip files).

Simply select the module’s ZIP file (e.g. FOSSAPPSV1.4.zip) to begin the installation. This could take a few seconds to finish, so hold back. After the installation finishes, press the “Reboot” button on the bottom right. 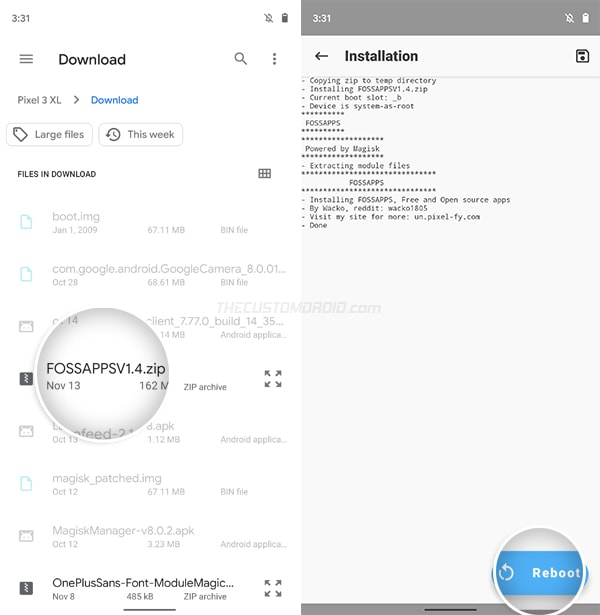 That it! The module works in an “Install & forget” way, so you do not need to configure any settings/options. After your device finishes booting, you should see the newly installed open-source Google apps alternatives like F-Droid, K9-Mail, Kiwi Browser, NewPipe, Lawnchair, etc among others in the app drawer.

Here are a few screenshots of the stock Google Apps against their free and open-source alternatives installed by the FOSSAPPS module.

Again, it’s worth mentioning that the module also installs MicroG components. So if you do choose to remove Google’s core services completely, apps that rely on these Google services should still work fine.

If you ever wish to uninstall the FOSS apps, go to ‘Magisk Manager‘ → ‘Modules‘ and find the ‘OnePlusSans By Module Magic‘ module from the list of installed modules. Then press the “Remove” button. The module will automatically be disabled and removed on the next reboot, along with all the installed apps. So just reboot your phone.

Note: FOSSAPPS is in its initial development phase. If your Android device accidentally enters a bootloop after installing the module, you could refer to our tutorial on how to fix bootloops caused by Magisk Modules.

Yes, replacing Google apps that you have been using for years would seem hard at first. You will essentially be moving away from an ecosystem where all your data is synced across different services. But using open-source apps over Google Apps certainly makes a huge difference when it comes to privacy and security.

I very much agree with Jack when he says that installing individual FOSS alternatives for Google Apps is a bit of pain. I have been there, and it’s a tedious job to do every time you reset or flash your phone. His module makes the complete process very much easy and a lot less time taking. So, kudos to him for his ingenious idea!

Jack is also known for his ‘Pixel-fy‘ module that allows users to get Google Pixel features on any non-Pixel phone. You might want to give it a go!

So by now, you have learned how to install free and open-source alternatives for Google Apps using the FOSSAPPS module. If you run into any issues during the installation or after, you could report them directly on Github. If you’re a developer who’d like to contribute to the project, please visit the module’s official Github codebase here.