Samsung Galaxy Tab A7 10.4 Guide: How to Unlock Bootloader and Root using Magisk

In a time when most device manufacturers have backed out from building Android tablets, Samsung is still in the game. According to recent data, Samsung holds the second major share in the tablet marketplace, right next to Apple. The manufacturer released the Galaxy Tab A7 10.4 a few months ago and it packs quite a punch of powerful hardware in a pretty affordable price tag.

On the software end, the Tab A7 runs Android 10 out-of-the-box with Samsung’s One UI 2.5 skin sitting atop. There’s no doubt that Samsung has quite significantly improved its software game with One UI, compared to the old Samsung Experience.

Rooting your Galaxy Tab A7 will give you full freedom to customize and tweak the software to your own liking. Be it UI customizations, using root applications, or installing audio mods such as ViPER4Android, rooting opens the gate wide open for everything.

Did you know? You can easily remove bloatware for the Galaxy Tab A7 without root.

Moreover, rooting with Magisk has its own perks. Unlike the traditional root solutions, Magisk allows you to apply modifications to the software systemless-ly, that is, without ever touching the /system partition. You could also use the built-in Magisk Hide functionality to hide root access from banking and security apps, and games such as Pokemon Go.

But in order to achieve root access, you must first unlock the bootloader of your Galaxy Tab A7 first.

The instructions in this guide will take you through the process of bootloader unlocking and rooting the Galaxy Tab A7 in a step-by-step and comprehensive manner. It doesn’t matter if you’re a beginner or a veteran in the field of Android software modding, you will be able to follow and perform these instructions quite easily.

Before you start performing the given instructions, there are a couple of things you should do.

Before anything, you should take a complete backup of all your important data stored on your tablet. Unlocking the bootloader will completely erase all the data, including installed apps, messages, contacts, and everything stored in the internal storage.

You could also take a look at our article here on backing up different types of data stored on Android devices.

Generally, your Windows computer will automatically install the required USB drivers for your Samsung tablet. But that is not always the case though. So, if you’re operating on a Windows machine, you might want to download and install the official Samsung USB drivers provided on this page.

If you’re using a macOS/Linux PC, you wouldn’t need any additional drivers at all.

3. Charge your Galaxy Tab A7

If you’re new to things like bootloader unlocking, we strongly suggest that you take your time to understand what each step does.

Having a sufficient battery charge in your Tab A7 will ensure that it doesn’t power off while you’re following the instructions and performing them. We suggest charging your tablet to a minimum of 40-50% battery level.

The process of unlocking the bootloader and rooting the Galaxy Tab A7 is a true and tried method. We have split the instructions into ten steps so that it’s easy for you to understand the complete process.

The only things you’ll require are:

With the requirements out of the way, let’s begin with the instructions.

The first step is to enable the ‘OEM Unlocking’ toggle on your tablet. This option must be turned on before you can attempt to unlock the bootloader. OEM unlocking resides inside the ‘Developer options’ menu, which is hidden by default to prevent users from unknowingly accessing them.

You can activate Developer Options by following our tutorial. Once you have enabled it, go to ‘Setting‘ → ‘Developer options‘ on your Galaxy Tab A7 and turn ON the toggle next to ‘OEM unlocking‘. Then select ‘Enable‘ when prompted to confirm. 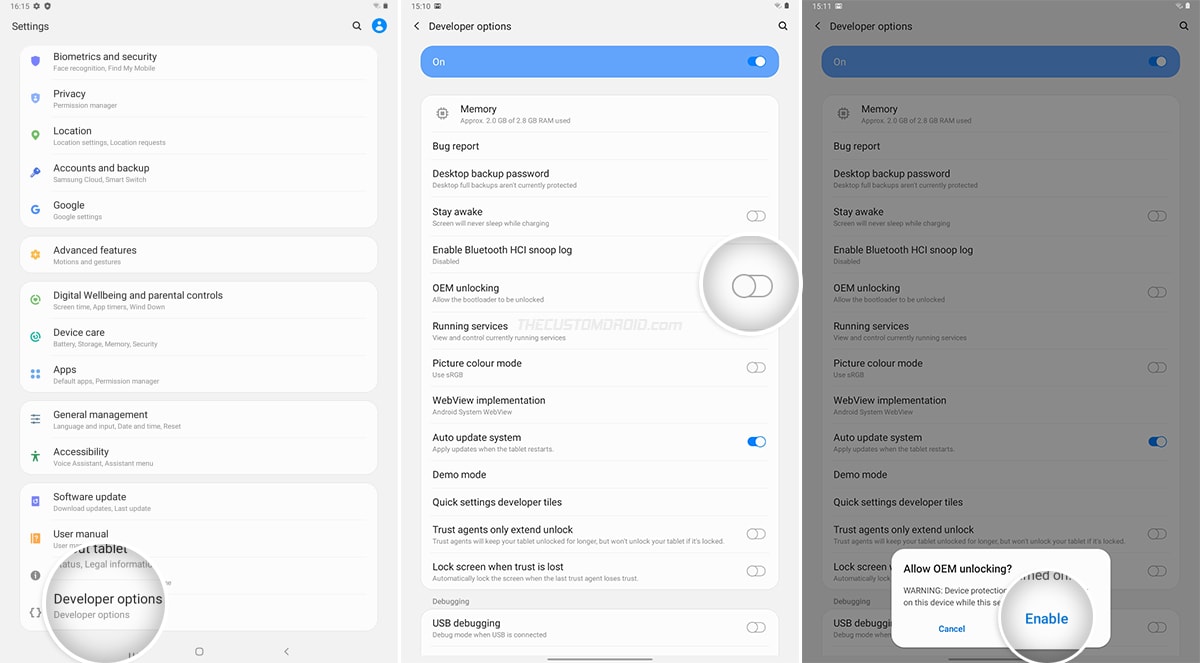 With OEM unlocking enabled, you can now unlock the bootloader on your Tab A7.

Unlike a majority of other OEM devices, Samsung doesn’t require using any fastboot commands or involve retrieving any unlock keys. It could be done straight on the device itself. When you turned ON the toggle, the bootloader enabled a special ‘Device Unlock Mode’ which is used for unlocking.

To unlock the bootloader, power off your Tab A7 first. Then connect it to the computer while holding the Volume Up and Volume Down keys together. You should now see the bootloader screen, as shown in the figure below. 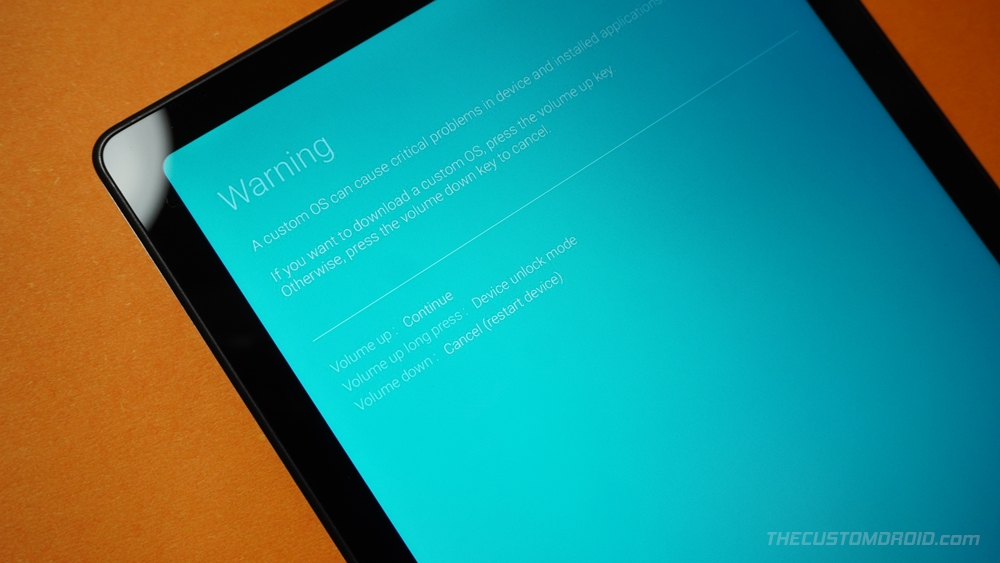 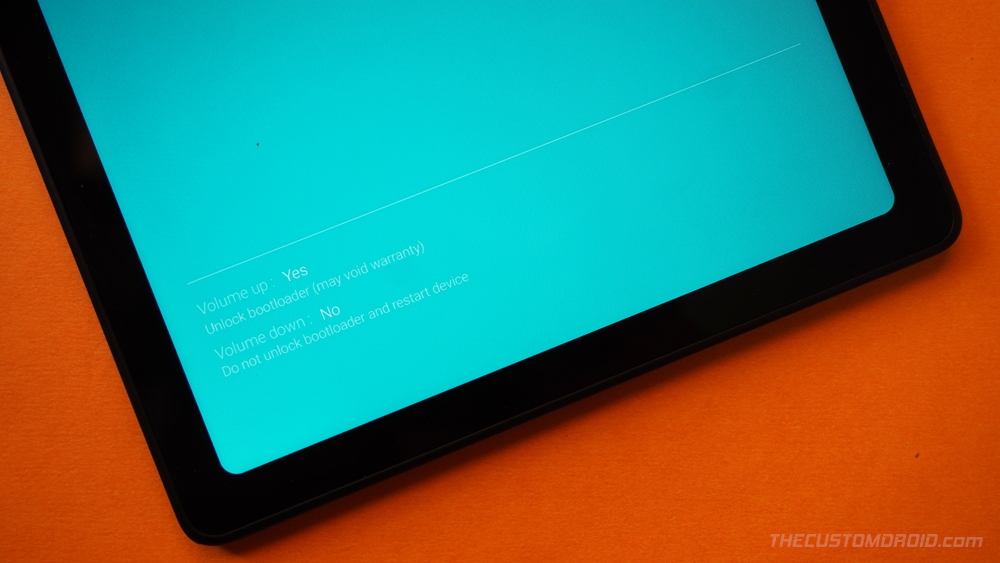 Your Tab A7’s bootloader is now unlocked and it should reboot automatically. You should also see a warning message right before the Samsung splash screen, just as shown in the picture below. This is an obligatory warning message and completely normal. And before you ask, no, there’s no way to get rid of it (unless of course, you relock the bootloader). 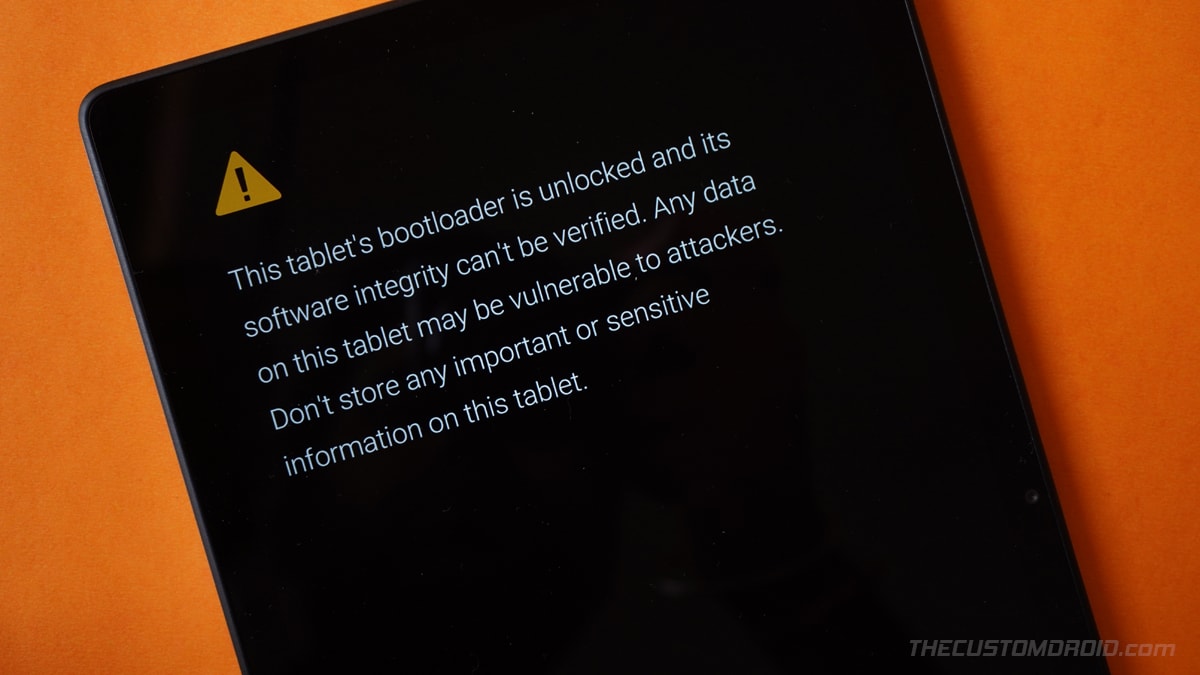 The first boot after unlocking the bootloader could take some time (took around 3-4 minutes for me). So be patient. 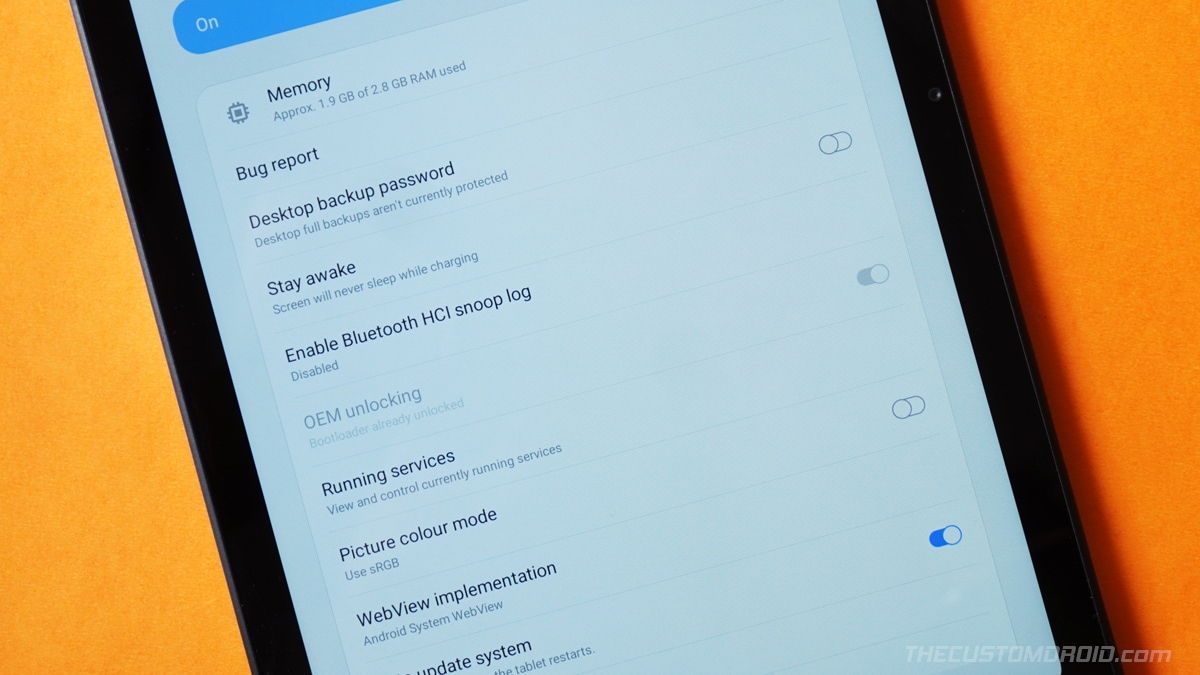 Now that the bootloader is unlocked, it’s time to start with the rooting process.

Before you can download the stock firmware package, it’s important that you verify the build number of the software installed on your Galaxy Tab A7. This will ensure that you use and patch the correct firmware file in the steps that follow. 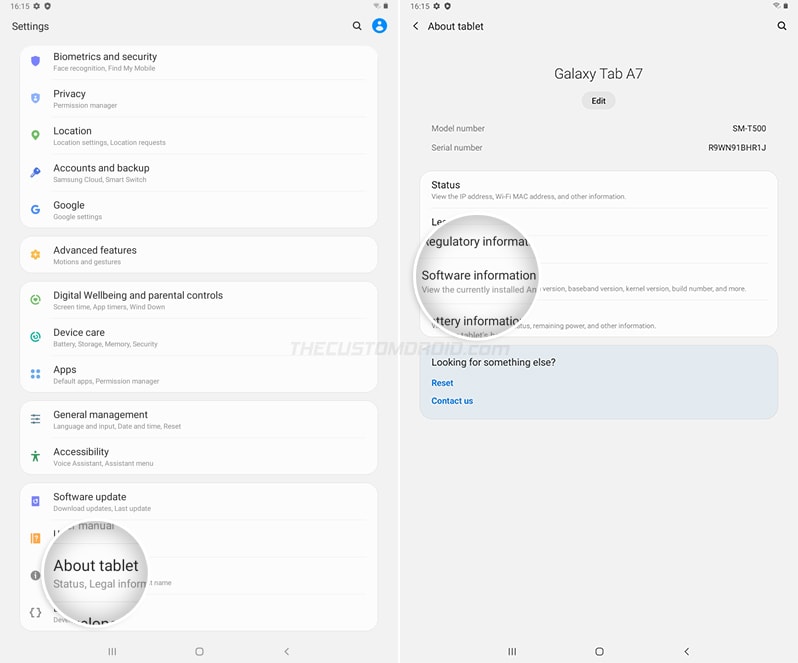 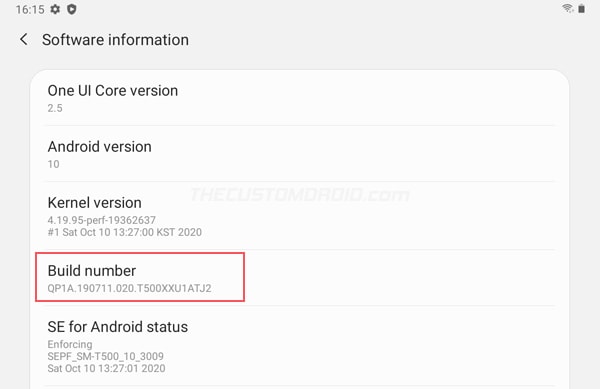 Note: While you’re verifying the build number, it’s a good idea to also check for any pending software updates by going to ‘Settings’ → ‘Software update’ → ‘Download and install’. In doing so, you will ensure that your Tab A7 is on the latest available software and take out the hassle of manually updating right after rooting.

Unlike a majority of other OEM Android devices, the Ramdisk on the Tab A7 does not reside inside the /boot partition. For such devices, Magisk’s creator John came up with an ingenious way to install Magisk to the /recovery partition.

This is something users have been following since the Galaxy S10 series came out. Following the same approach, rooting the Galaxy Tab A7 involves patching the AP firmware file with Magisk.

So, begin by downloading the stock firmware package for the software build number currently installed on your Galaxy Tab A7.

While you could use online databases like SamMobile, SamFrew, etc, we recommend using Frija or Samloader tool to download the stock firmware package. These tools download the latest firmware directly from Samsung’s update servers without any speed caps.

Step 5: Extract the AP Firmware and Transfer it to the Tab A7 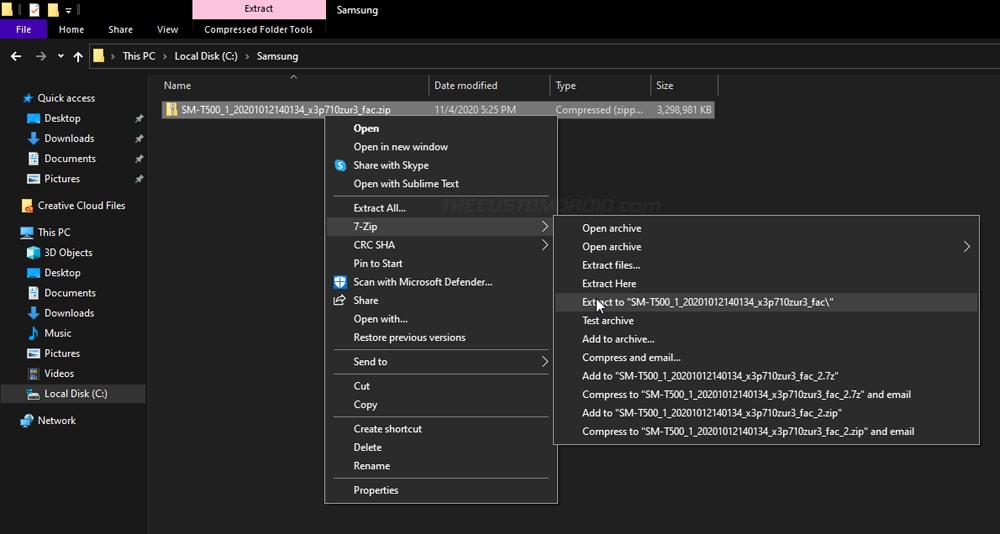 The extracted folder should contain the individual firmware files in .tar.md5 format. These will be:

While you’ll only need the AP firmware for patching, don’t delete the rest of the files. You will need these files later on during this guide.

Now, connect your Galaxy Tab A7 to the computer via USB and enable ‘File Transfer’ mode. Copy over the extracted AP firmware file to the tab’s internal storage. Although you can copy this file anywhere, we suggest copying it to the root directory (i.e. outside all the folders) for easier access.

With the required AP firmware now transferred to your tablet, it’s time to patch it via Magisk Manager.

So, download the APK file of the latest Magisk Manager from the official Github page. Once downloaded, install the APK on your tablet (Not sure how? See: How to Install an APK file).

Not needed anymore as Magisk v21 has been pushed to the Stable channel as well.

Launch the Magisk Manager app, press the ‘Install‘ button and choose ‘Select and Patch a File‘ from the list of available installation methods. This should instantly open the file selection window for you to choose the file you want to patch with Magisk. So, navigate to the location where you transferred the AP firmware file and select it. 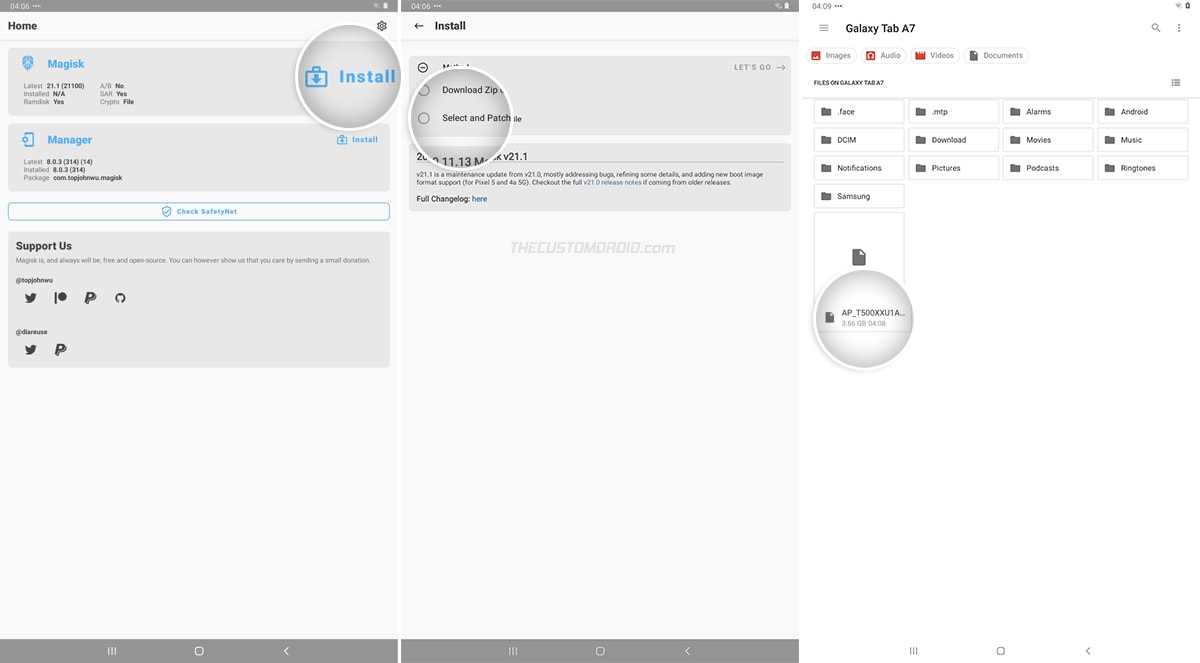 Once the file has been selected, press ‘LET’S GO!‘ to patch the file. Magisk Manager will download the latest version of Magisk and patch the AP firmware with it. The patching process might take a minute or two depending on the filesize. 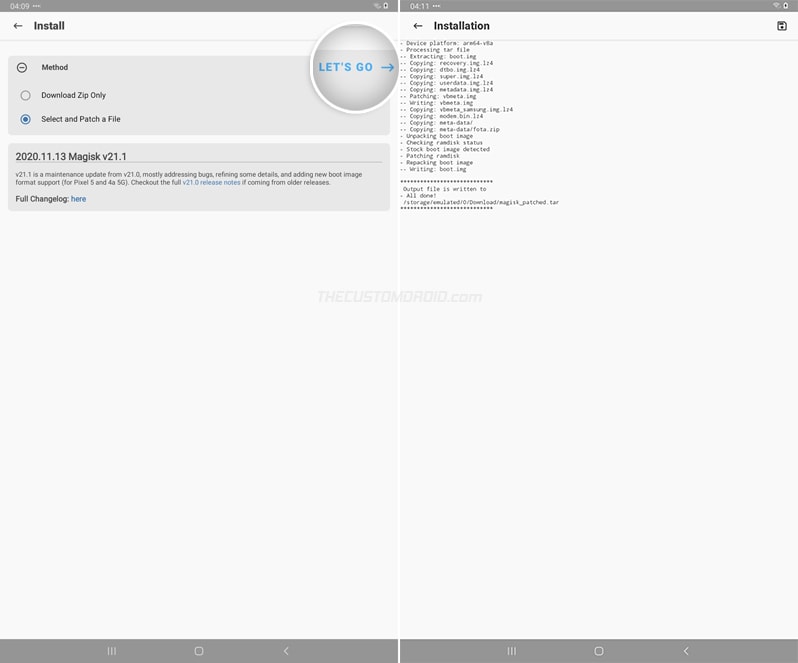 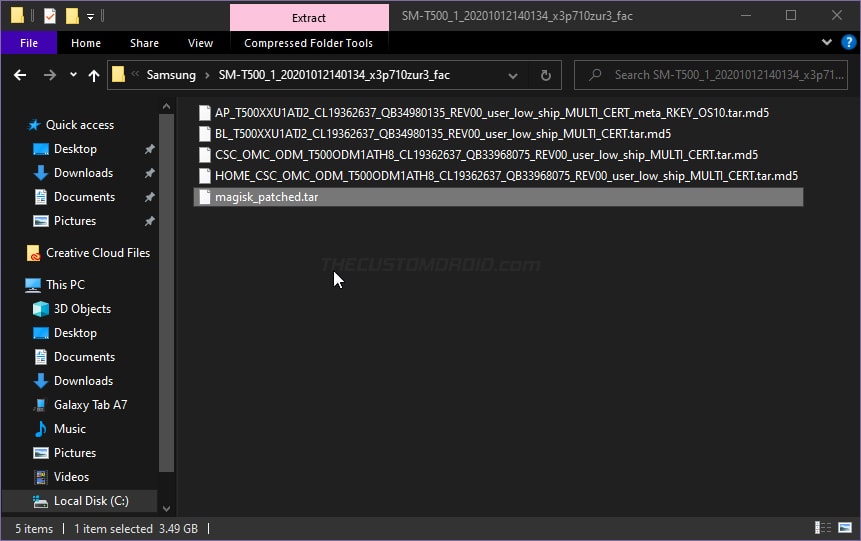 Step 7: Boot your Galaxy Tab A7 into Download Mode

For Odin to recognize your Galaxy Tab A7 and flash the patched AP firmware, you must boot it into Download Mode.

To do this, power off your tab first. Then connect it to your computer over USB while holding the Volume Up and Volume Down keys together. You should now see the Bootloader screen (what you saw while performing step #2). Simply, tap the Volume Up key once to enter Download Mode. 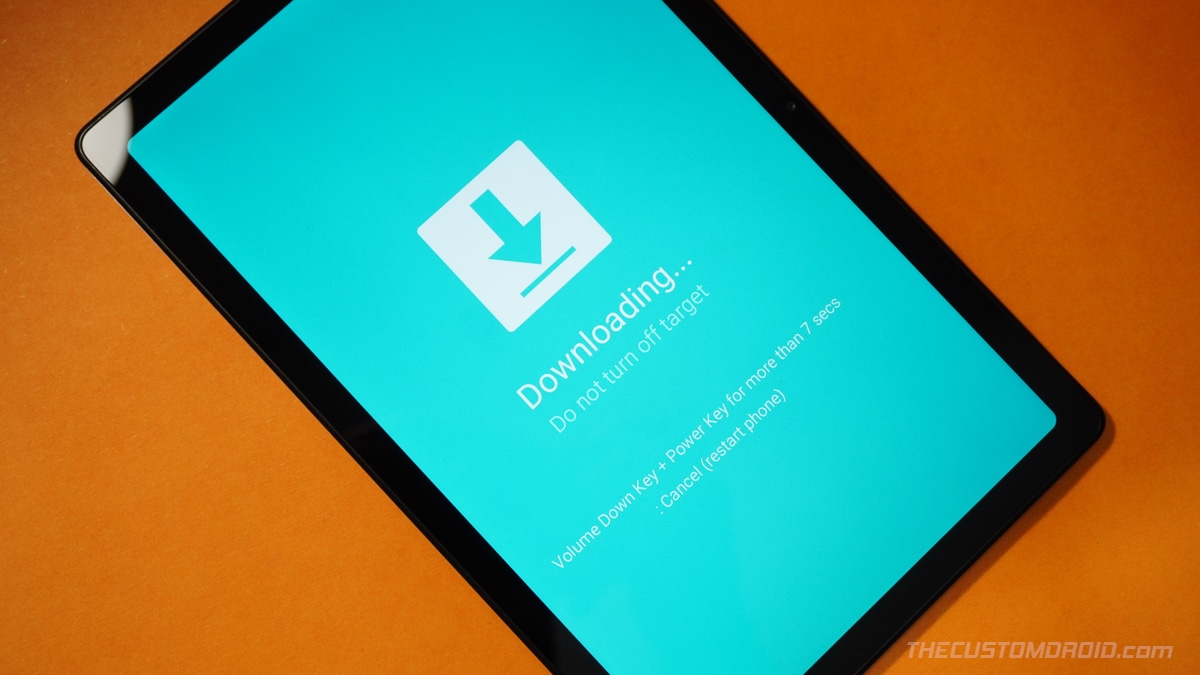 Step 8: Download and Launch Odin Tool on the computer

To flash the AP firmware file, you will need the infamous Odin Flash Tool. So, download Odin v3.14.4 from this repository and extract the contents of the ZIP package on your computer.

Now launch the Odin tool by double-clicking the ‘Odin3 v3.14.4.exe‘ executable file. If you’re prompted with a message on the screen, select “Ok“. You should now see Odin’s interface on your computer screen. 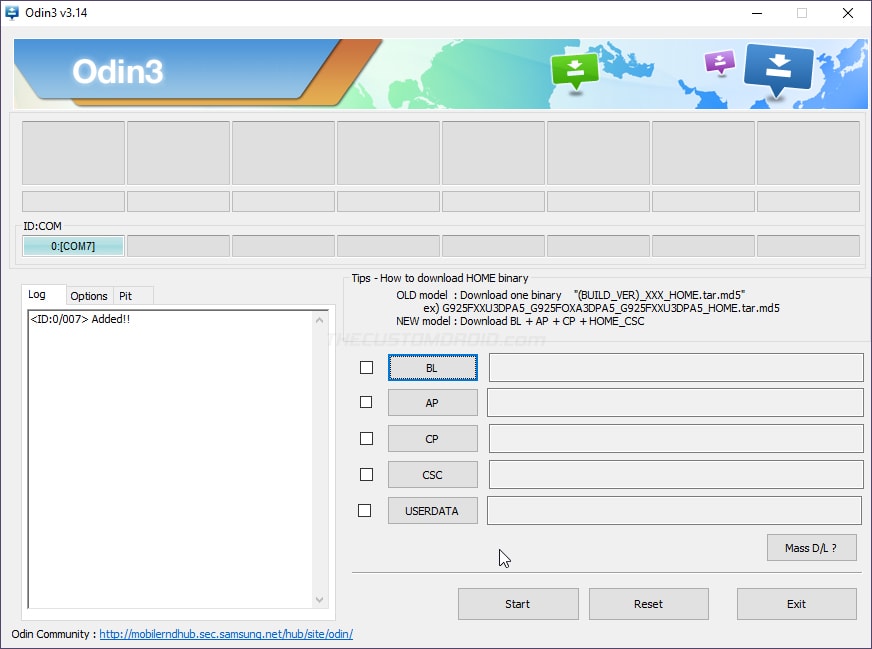 The tool will automatically recognize your Galaxy Tab A7 in Download Mode and display the corresponding COM port number on the top-left of the interface.

Tip: If you’re operating on a Linux/macOS computer, you can flash the firmware on Samsung devices using Heimdall.

With everything now ready, it’s time to flash the patched AP firmware file and root your Samsung Galaxy Tab A7 with Magisk.

Now, load the firmware files in the Odin tool as instructed below: 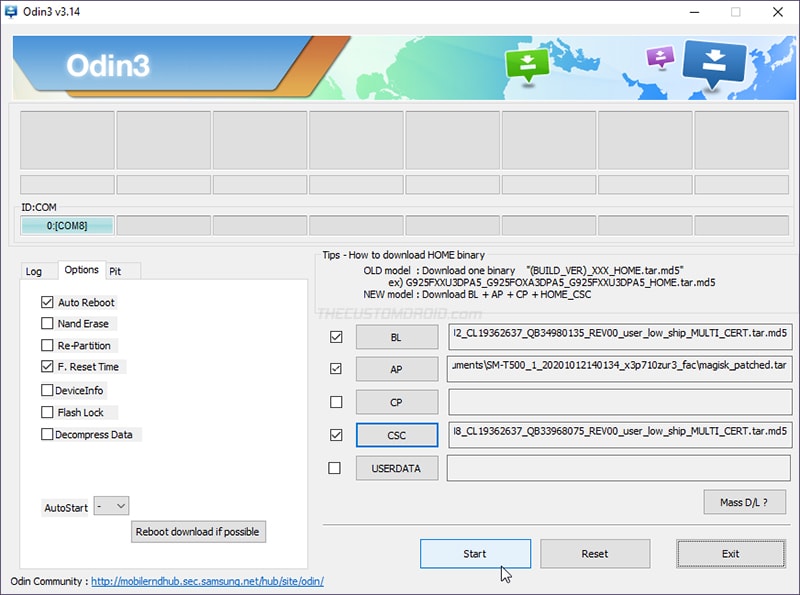 Once all the firmware files have been loaded in their corresponding slots, click ‘Start‘ to begin the flashing process.

After the flashing process is complete, you should see a ‘PASS!‘ message in Odin and your Galaxy Tab A7 should automatically reboot. You can close Odin and disconnect your tablet from the computer. 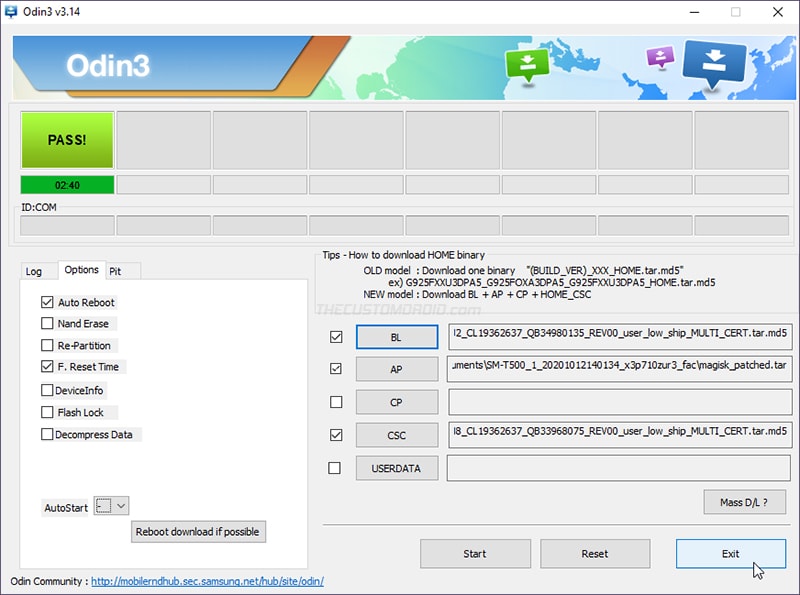 Your tab may reboot once (or more) during the first after rooting. It could take some time, so be patient. Once your tab boots, you will need to go through the initial setup by following the instructions and connect it to the internet.

While the rooting process is now complete, there are just a couple of things left to do before you could start using Magisk. 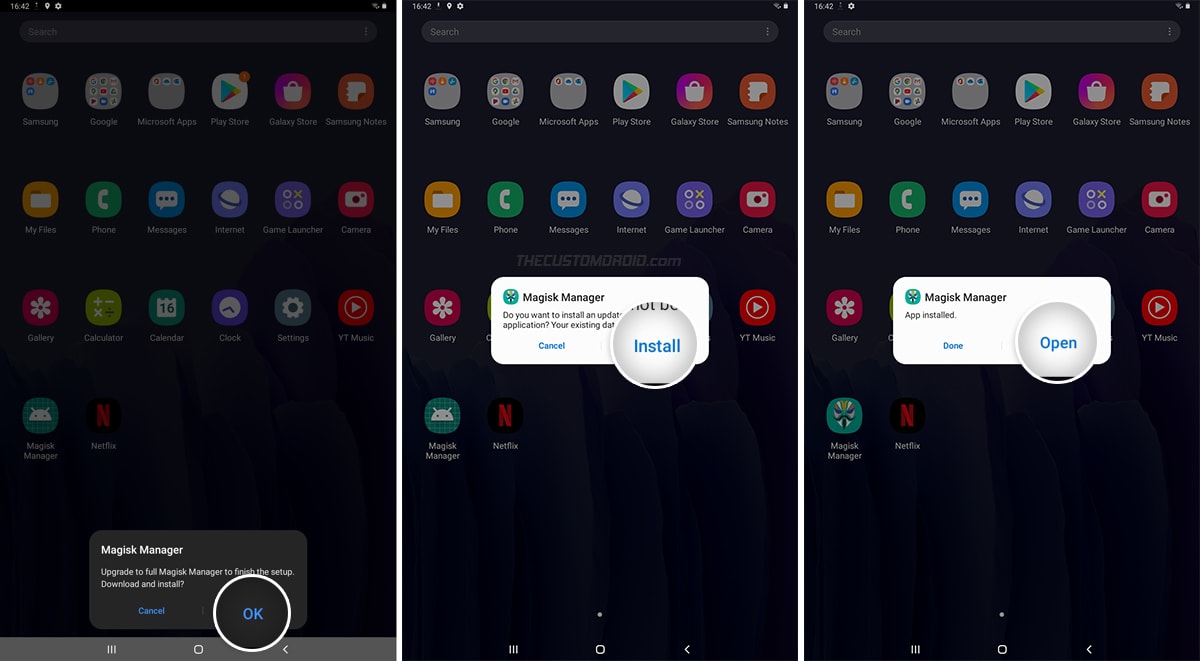 Once the full Magisk Manager is installed, launch the app and it will prompt you to complete the additional setup. So press ‘Ok’ and wait for the magic to happen. Once it is complete, your tab will reboot automatically. 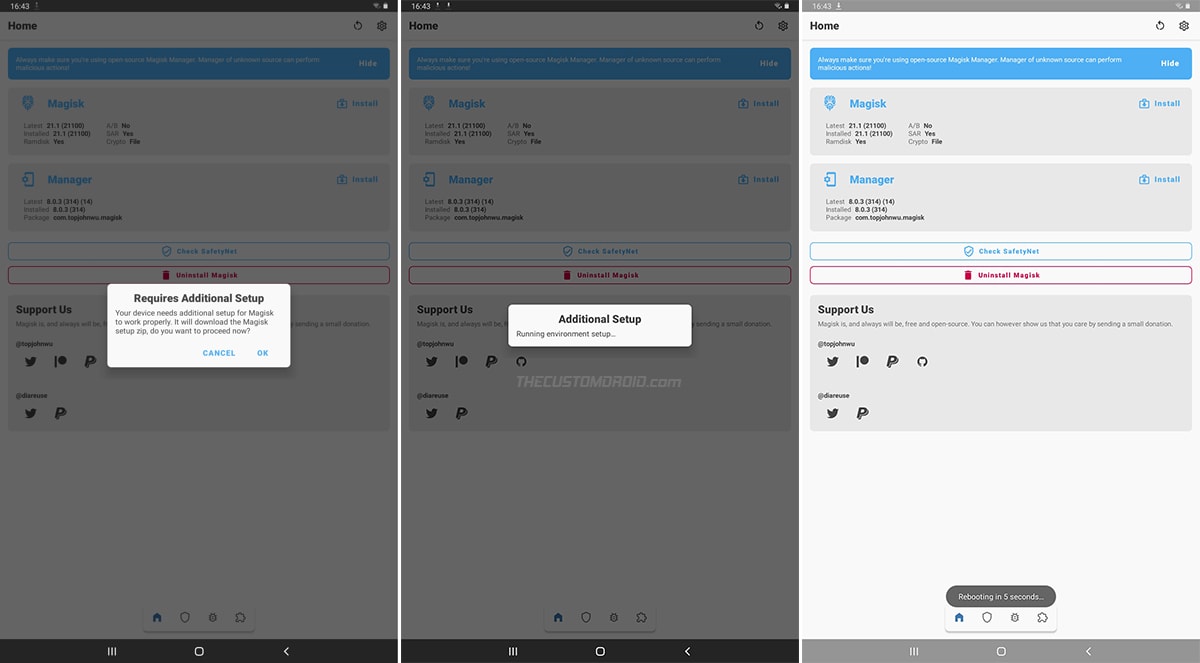 Your Galaxy Tab A7 is now Rooted!

That’s it! You have successfully rooted your Galaxy Tab A7 10.4. To verify this, you can launch the Magisk Manager app and you should see the installed Magisk version right next to the ‘Installed’ label. You can further check if your rooted tab passes SafetyNet by pressing the ‘Check SafetyNet’ button in Magisk Manager. 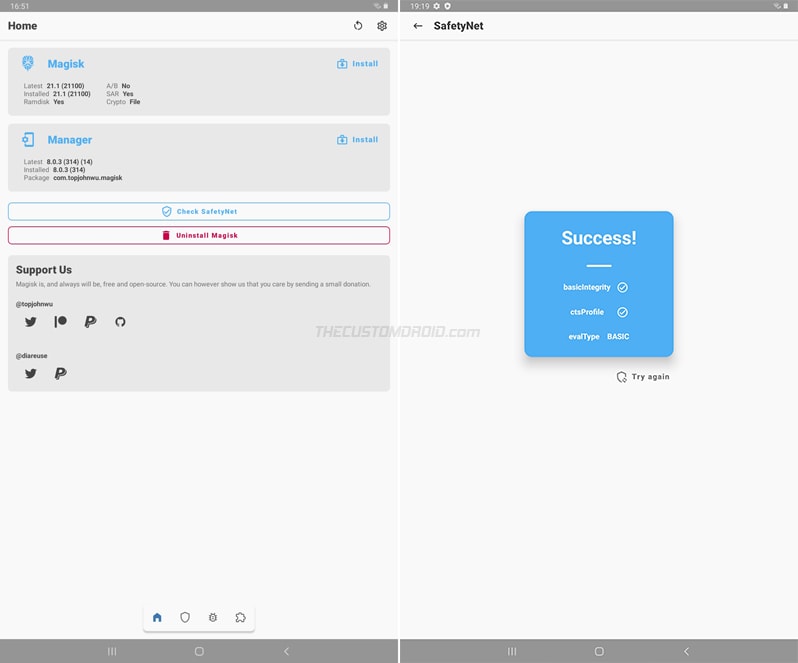 SafetyNet fails and shows ‘Hardware’ evalType? It means that Google’s new hardware-backed attestation is now in effect on your tablet.

Now go ahead and start using root applications like Titanium Backup. You could also hide root from banking and security apps that might generally not work on a rooted device. From Magisk v20.4 onwards, Magisk Hide is turned off by default on new installations. So, you will need to turn it ON manually by going to Magisk Manager settings.

Now let’s take a look at some questions you might have after rooting your tablet.

Q: How can I install software updates on my Galaxy Tab A7 after rooting?

Q: Do I need to press a special button combination to enter the rooted Magisk system and stock recovery?

Q: My rooted Galaxy Tab A7 doesn’t pass the SafetyNet test and shows Hardware evalType. Is there anything I could do?

Q. I wish to unroot my tab and revert back to the stock Samsung software, what should I do?

That’s it! You have learned how to unlock the bootloader and root the Samsung Galaxy Tab A7 10.4 using Magisk. If you have any questions or face any difficulties while performing the instructions, feel free to let us know.