You can now download Magisk v21.4 with Magisk Manager v8.0.7 and install it on your Android device. Users running a previous version can easily update to the latest version of Magisk by following the instructions provided on this page.

Update #9 (23 February): Magisk v22 has been released. It merges core Magisk and Magisk Manager into one single release as an APK file, which is also apparently a flashable ZIP.

Update #8 (17 January): Since the last release just a day ago, Magisk is now updated to v21.4 to an issue that causes several root apps to break. This release is accompanied by v8.0.7 of Magisk Manager that fixes the SEPolicy rule migration when updating. (Source)

Update #7 (16 January): Magisk 21.3 has been released. It fixes a bug related to F2FS drivers in the Linux kernel that caused widespread bootloops and module instability on a lot of devices. Here’s a summary posted by John Wu on Twitter. The latest release is accompanied by Magisk Manager 8.0.6 with minor UI tweaks and updated internal scripts. (Source)

Update #6 (12 January): Magisk v21 has been pushed to the Stable channel now. Users running the beta release do not need to reinstall it because no new changes were made. The developer has also released Magisk Manager 8.0.5 with a minor fix. (Source)

Update #5: Developer John Wu has released Magisk 21.2 and Magisk Manager v8.0.4 with minor changes and bug fixes. This will presumably the last release of v21 and will be pushed to the Stable update channel if everything goes well.

Update #3: Just a day after the previous release, John Wu has now released Magisk Manager v8.0.2. This fixes permission requesting on devices running Android 10 and below. It also moves more files to the new CDN for faster and more reliable downloads.

Update #1: According to developer John Wu, recent reports indicate that Magisk 21.0 does not work on MediaTek Android devices.

To recap, the previous release (Magisk 20.4) disabled Magisk Hide by default in light of the new hardware-backed SafetyNet attestation, BusyBox standalone mode, and introduced several other minor changes. Before you head over to the download links or instructions, let us take a look at some of the key changes that Magisk v21 brings.

Up until now, Pixel 5 and Pixel 4a (5G) owners had to resort to Magisk Canary builds for gaining root access.

But now, Magisk 21.1 (and above) has been updated to use Boot Image Header version 3, thus adding support for the Pixel 5 and Pixel 4a 5G. If you’re a developer, the changes in the latest header version have been posted in the official documentation here.

As you’d know, after months of testing, Google finally announced the stable Android 11 update a few months ago. Several device manufacturers are already begun publishing Android 11 beta builds for their devices, like the OnePlus 8 series. This certainly means that a lot of users are running Android 11 on their phones. For rooting enthusiasts, Magisk has already supported Android 11 on the Canary channel. With v21.0 (and above), Magisk now fully supports Android 11 on the stable channel. The developer has worked pretty hard to re-write a lot of Magisk code from the scratch.

Further, Magisk generally mounts and use the /tmpfs directory to store temporary data. According to the developer, the /sbin sub-directory may no longer be available in Android 11. So, on devices running Android 11, Magisk will automatically create a random folder inside /dev and use it as PATH. Developers could find everything about this change in the official documentation here.

In terms of Android 11 support, Magisk v21 also fixes an issue wherein Magisk was removed after a factory data reset.

Earlier last year, developer John Wu showcased a preview of a completely new design of the Magisk Manager application, courtesy of Viktor De Pasquale (@diareuse). For months, users running Magisk Canary have had the privilege to enjoy this new UI. With Magisk Manager v8.0.2, the newly redesigned UI is now available for users on the stable channel as well.

Starting with the design itself, the old hamburger-based slide-out menu has been completely removed. It has been replaced with a minimal navigation bar towards the bottom end of the app. Items throughout the app’s interface are now showed in form of cards.

Individual sections of the app are rearranged for quicker access. For example, Magisk Hide (when enabled) is now shown under the ‘Superuser’ section instead of having its own dedicated section. Also in the old UI, downloading and managing modules were done from their own individual sections. With the new UI in Magisk Manager v8.0.2, you now have a unified ‘Modules’ section that allows you to manage (install, uninstall, and disable) and download Magisk modules from the same screen. 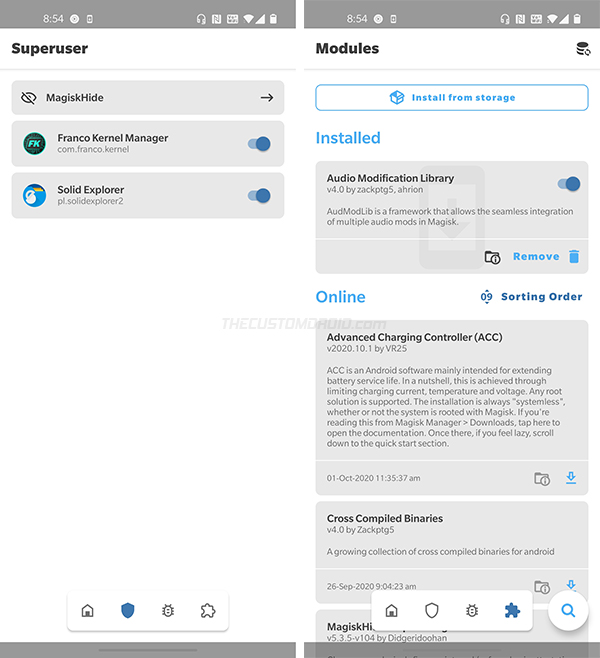 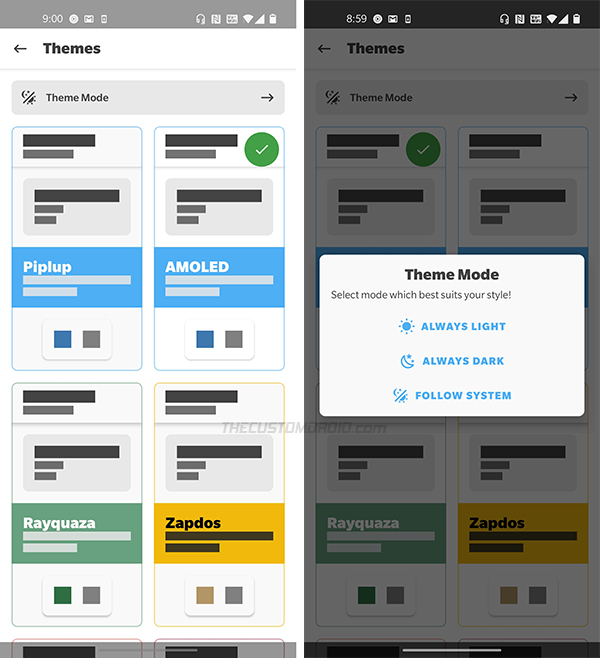 Personally, we are not a huge fan of the card-based design in general, but Magisk Manager adapts it so well that we have no other choice but to adore it. Overall, this new user interface takes quite a huge leap over the previous one, in terms of both design and usability.

Boot loops caused by modules due to incompatibility is a common issue that a lot of users face. Up until now, users could either use TWRP or ADB to remove the rogue Magisk module(s) to fix the problem.

Developer John Wu was surely well aware of the issue and has brought us a simple solution. From Magisk 21.0 onwards, you could simply boot your Android device into Safe Mode. Magisk will detect Safe Mode and automatically disable all the Magisk modules. You could just reboot into the OS after this and the boot loop will be fixed.

The SELinux security has been hardened with a completely new policy setup for devices running Android 8.0 Oreo and above. This new policy now keeps the Android Sandbox less compromised, separates the Magisk policy rules from original rules, thus providing better security on devices rooted with Magisk.

Several users reportedly faced bootloop and module instability issues with Magisk v21. These were reported on Github. The issue has been fixed in Magisk v21.4 as developer John Wu was able to find the culprit. A newer Canary build has also been pushed for the respective users.

He pointed out that it was caused due to an F2FS driver bug in the Linux kernel. He further added that this bug only affected a specific Android kernel branch, which was the reason why not all devices were affected by the issue. As for stability issues with Magisk modules, only devices that used the modern F2FS drivers were affected.

So these were the major changes in the Magisk v21 update. For end-users, not a lot has changed except for the first two, i.e. Android 11 support and redesigned Magisk Manager. For developers, there are also some key changes made on how Magisk works. You would like to refer to the new changes in the official documentation here.

Below is the complete changelog for Magisk 21.4 as published by the developer on Github.

Below is the complete changelog for Magisk Manager 8.0.7 as published by the developer on Github.

Like any previous release, Magisk v21.4 is available for download as a flashable ZIP file for those who want to install it via a custom recovery. Users who wish to install Magisk by patching the boot image can download the latest Magisk Manager v8.0.7 APK from below.

If you are looking for a previous version of Magisk, check out the official Github release page.

How to Install Magisk v21.4 on Android

You can install the latest version of Magisk on your Android device using the following two ways/methods:

The second method also makes it much easier to install OTA updates on rooted devices using Magisk. All you will need is the stock boot/recovery image for the Android software version/build number currently installed on your device. You can extract these images from the OEM Factory Image or OTA update package (instructions here), try downloading it from firmware.mobi, or look up your device’s rooting guide on our website.

Before you install, it is strongly recommended to take a full backup of all your data before you begin installing Magisk. If any issues arise, this backup should help your restore all your data.

The following tutorial will help you install Magisk v21.4 using the aforementioned methods. We suggest you go through the instructions and familiarize yourself with the procedure before you start performing it.

— The Complete Step-by-Step Guide to Install Magisk on Android

If you have a previous version of Magisk installed on your device, then there’s no need to re-install it at all. You could simply update to Magisk v21.4 by using the Magisk Manager app. To do this:

That’s it! So you were able to download Magisk v21.4 and install/update it on your phone. Don’t forget to browse through the redesigned Magisk Manager app to familiarize yourself with the new UI.

The developer has surely made some major improvements in this latest Magisk update, making it more secure for end-users, and easier for module/kernel developers out there. We highly appreciate his hard work and the time he has devoted to the Android community. If you have any questions about Magisk or its installation, feel free to let us know.