Rooting your phone with Magisk not only allows you to use root applications but also enables you to apply modifications to your phone’s software systemless-ly. That is without actually mounting or altering the system partition. We have already covered a detailed tutorial on how to install TWRP on OnePlus 8 series and root the phone using it.

However, if you do not plan on flashing custom ROMs and just want to root your phone, then installing TWRP isn’t even necessary. If you wish to flash custom ROMs, you could simply boot TWRP temporarily (using the fastboot boot command) and use it to install ROMs or anything else for that matter.

For those who do not know – it is possible to install Magisk and root your phone without installing TWRP at all. This could be done using what we call the “Magisk Patched Boot method“. This alternate rooting process involves patching the stock boot image file in Magisk Manager and then flashing the resultant patched boot image to the phone via Fastboot.

This simply makes the whole rooting process much more straightforward, less time-consuming, and also enables you to take OTA updates on your OnePlus 8 after rooting, with ease.

So now, without any further ado, let us begin with the instructions.

As we mentioned earlier, rooting your OnePlus 8 device without TWRP recovery could easily be done through the ‘Magisk Patched Boot’ method. We have split the complete process into four major steps so that it’s easier for you to understand and perform the instructions.

The rooting process involves using the fastboot tool to flash the patched boot image. So, the first step is to download the Android SDK platform-tools (which includes fastboot) and install them on your PC.

To do this, download the latest version of the tools according to your PC’s operating system:

Once the platform-tools package has been downloaded, extract its contents on your PC. The extracted ‘platform-tools’ folder should contain the ADB, Fastboot, and other binary files.

Next, move the ‘platform-tools’ folder to an easily accessible location on your PC for installation. For example, move it to the C:\ drive if you’re using a Windows PC or inside the ‘Documents’ directory on a Linux/Mac machine.

With the required tools now installed, you need to launch the PowerShell/Terminal window on your PC inside the ‘platform-tools’ folder. To do this:

At this point, you have everything ready and set up on your PC for carrying out the flashing later during the steps. Keep the PowerShell/Terminal window open as you’ll need it later during the instructions.

Each boot image is packed inside a compressed ZIP package. So, make sure that you extract the ZIP to get the boot image (.img) file. Once extracted, copy the boot.img file inside the “Download” folder of your your phone’s internal storage. Although you can place the file anywhere on the internal storage, we prefer the Download folder so that it’s easier to locate.

Now that you have your phone’s stock boot image, you will need to patch it through Magisk Manager. To do this, first download the latest version of Magisk Manager from Github to your phone. Then, launch the file manager app and navigate to the folder where the APK file was downloaded. Tap on the APK file (e.g. MagiskManager-v8.0.2.apk) and press the ‘Install’ button to install the Magisk Manager app on your OnePlus 8. 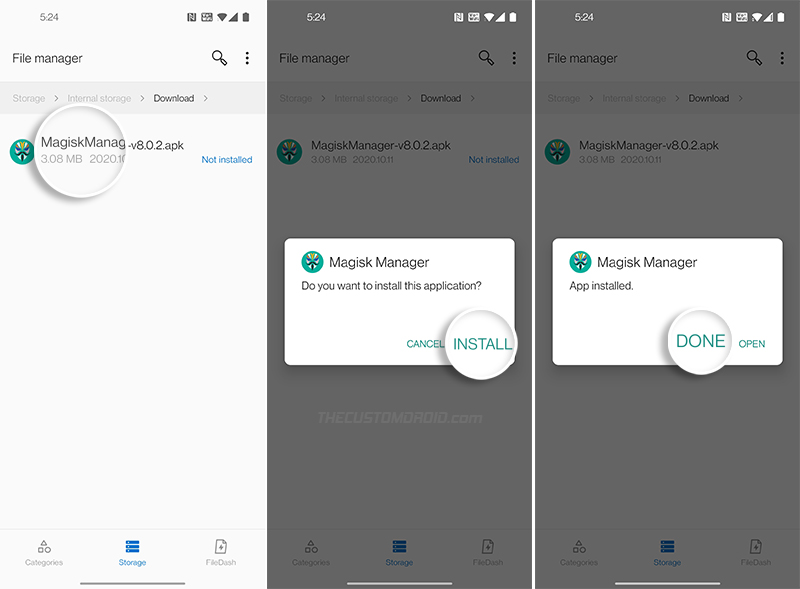 Go to the app drawer and launch the Magisk Manager app on your phone. Now, press the “Install” button and tap on “Select and Patch a File”. Then navigate to the “Download” folder and select the stock boot image file you transferred during step #2. Once the file has been selected, press “Let’s Go”. 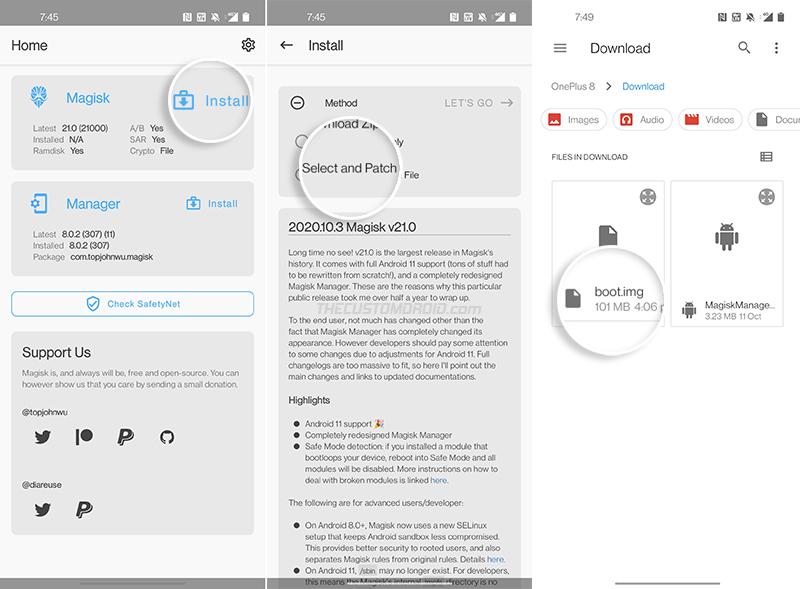 Magisk Manager will download the latest version of Magisk and patch the boot image with it. Once done, the patched boot image (magisk_patched.img) will be stored inside the “Download” folder of the internal storage. 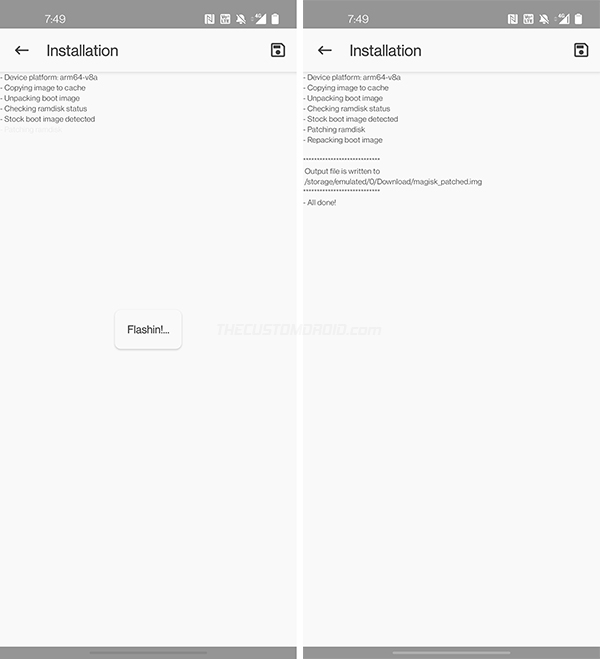 Note: When entering the mentioned Fastboot commands, make sure to prepend them with a dot and backslash [.\] in Windows PowerShell or a dot and forward slash [./] on Mac/Linux Terminal. For reference, take a look at the figures below.

So first, transfer the ‘magisk_patched.img’ file from the ‘Download’ folder in the internal storage to the ‘platform-tools’ folder on your PC.

Next, boot your OnePlus 8/8 Pro into Fastboot Mode and connect it to your PC over USB. 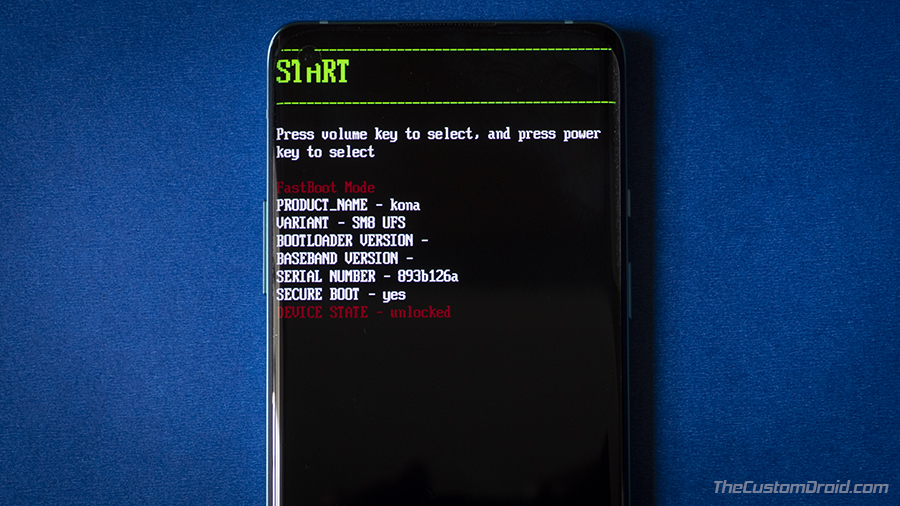 Now, enter the following command in the PowerShell/Terminal window to ensure that your PC can communicate with the phone over the fastboot interface.

The command should return your phone’s unique ID. In case it doesn’t, then make sure that you have the required USB drivers installed and restart your PC.

Once the file has been flashed, reboot the phone back into the system (OS) using the following command.

That’s it! Your phone should now be rooted with Magisk. To verify this, simply launch the ‘Magisk Manager’ app and check the installation status. You can further use the in-built function to check if your rooted OnePlus 8 passes SafetyNet or not. It’s worth noting that SafetyNet will not pass if your phone has hardware-based attestation enabled. 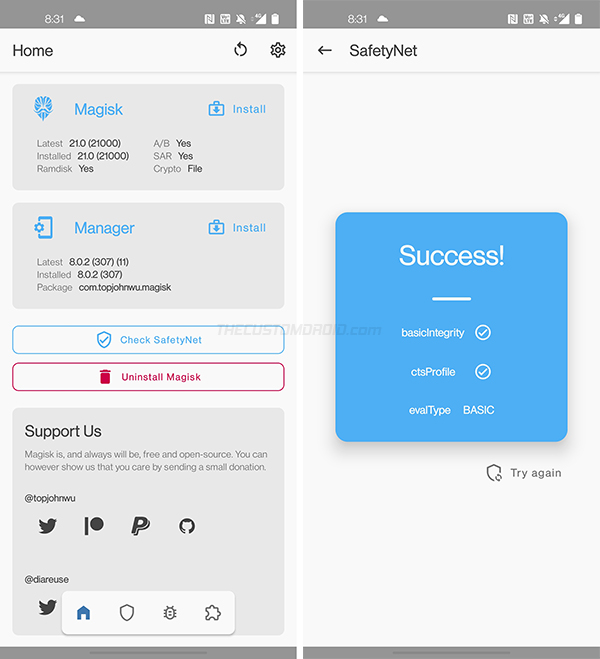 Now that your phone is rooted, you can install and use root applications such as Titanium Backup. You could also install modules to apply modifications to the software, systemless-ly.

Now that we are done with the rooting part, let’s talk about something that’s a major concern for every user after rooting their phone, i.e. OTA updates. On a traditional A-only device, installing OTA updates would require completely unrooting first.

However, with the new A/B partition system, it is possible to easily install OxygenOS OTA updates after rooting your OnePlus 8 series using Magisk. This also allows your phone to stay rooted even after installing the update so that users wouldn’t need to go through the trouble of rooting their phones again. You will find a more detailed explanation on this page.

To install OTA updates on your rooted OnePlus 8/8 Pro:

Tip: In case the OTA installation fails at step #4 above and shows an error, you could alternatively download the latest OxyenOS full ROM from here and install it using Local Upgrade. Once done, follow step #5 and onwards.

That’s it! Your OnePlus 8/8 Pro will now boot into the updated OxygenOS software with Magisk root still intact. You can repeat this same process every time a new OxygenOS OTA update is available for your phone.

So by now, you have learned how to root the OnePlus 8 and OnePlus 8 Pro using Magisk, and also how to install OTA updates after rooting. If you have any questions or feel stuck while performing the instructions, let us know. Please make sure that you mention your device name, model number, as well as the OxygenOS version currently installed on the phone.