When you buy a new phone, there’s always a slight chance of running into issues during usage. While some of these are caused due to faulty hardware or software (the OEM skin), others are caused due to user-errors as well. But there are times when it’s the installed applications that are to be blamed.

As it comes to my notice, some Android devices (including my own) are experiencing a yellow tint when browsing websites in the Chrome browser. In this tutorial, I will walk you through the steps to fix Chrome’s yellow tint display issue on Android devices including the OnePlus 8, OnePlus 8 Pro, OnePlus 8T, and Poco X3 NFC.

What exactly is the Yellow Screen Tint Issue in Chrome?

The issue is that the phone’s display changes its colors to a warm yellowish shade when browsing in the Chrome Browser on Android. It seems to resolve on its own if you scroll through or visit another page by following a link.

One might confuse this with the ‘Reading Mode’ or a b6similar feature built into several phones. When enabled this particular feature has a similar effect and tones down the blue colors to prevent eye fatigue over time.

Experiencing this issue initially led several users to believe that the problem caused due to a faulty display of their phones. Only that it wasn’t.

It was discovered that the yellow screen tint problem emerged due to a new Experimental ‘Dynamic color gamut‘ flag that is automatically enabled in the Chrome Android browser app starting with v87. The flag’s description reads – “Displays in wide color when the content is wide. When the content is not wide, displays sRGB“.

Is it only affecting Chrome? No, not exactly. Users using the Brave browser (a popular Chromium-based browser) have experienced the same as reported in the official community forums.

Does the issue affect all Android devices using the Chrome Browser? No. My Pixel 3 XL hasn’t experienced any issues so far.

But that’s not it. Users over at XDA have confirmed that the same issue also occurs on the Poco X3 NFC.

I personally encountered this issue on my OnePlus 8 back in November 2020, right after it received a software update. I presumed that it was a software issue that would probably be resolved in the next update.

Though, it wasn’t. This led me to start digging and I was astounded by how widespread the problem was. There were several reports of the issue on the OnePlus community (1, 2, 3, 4). Here’s a little screenshot of what you would see if you search the OnePlus forums for the yellow tint issue: 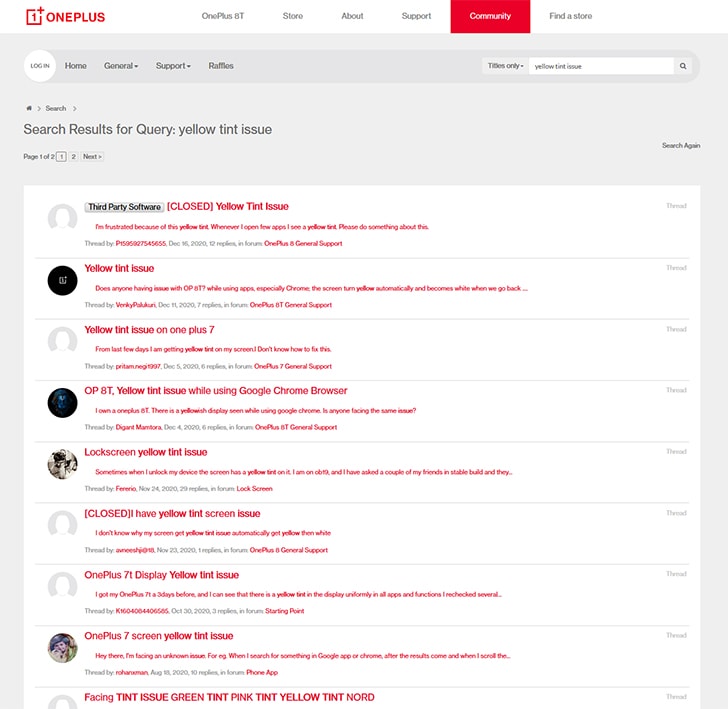 Indeed, there are numerous reports. This means there are several users out there who are clueless and looking for a possible solution to fix the yellow screen tint on their Android phones. Let us see how.

How to Fix Yellow Tint Issue in Chrome on Android

To fix the Yellow tint issue in Chrome on the OnePlus 8, 8 Pro, 8T, or any other device like the Poco X3, you just have to disable the “Dynamic color gamut” flag in the browser. If you’re experienced enough, you would know how to do it. If not, follow the steps listed below.

Once Chrome is launched again, it should take you to the same screen and the Dynamic color gamut flag should appear right at the top of the list and disabled.

That’s it! You have just fixed the Yellow tint issue in the Chrome browser. While I discovered this fix/workaround more than a month ago, I thought it would be good to share it with you guys as well. This is the same fix that’s advocated by OnePlus in the support forums.

If you’re facing a similar issue on your Android device, you could let me know so that I can add it up to the list above.

Remove Facebook Bloatware from OnePlus 8, 8 Pro, and Nord without Root