What is a Payload.bin File?

Google introduced the concept of A/B (Seamless) System Updates back with Android Oreo. Of course, the new update mechanism offers several benefits. For one, the updates are installed seamlessly without rebooting the phone into the recovery mode. Also, it drastically reduces post-OTA failures that could make the device unusable. XDA posted a detailed write-up on A/B partitions and how it affects the custom development scene.

Extracting the individual device partition images from an Android OTA file could come in handy in various situations. For example, if you want to grab the stock boot image for installing Magisk and rooting your phone. Or, if you want to manually upgrade your phone to the latest software by flashing the firmware images via fastboot.

In any of these cases, you can use the Payload Dumper tool. The tool is basically a Python script/program created by developer ius that allows users to easily extract the Android OTA Payload.bin file on any Windows, macOS, or Linux PC, and even on an Android device (since Android uses the Linux kernel).

Important Note: The Payload Dumper tool can only be used to extract the Payload.bin file from full OTA packages. It will not work for incremental OTA packages.

The easiest way to make use of the Payload Dumper Tool to extract the Payload.bin is on a computer. However, some users might want to do it on-the-go, skipping the need for a PC completely. If so, then there’s a way to use the Payload Dumper tool on an Android device as well.

While the latter does require a bit of extra effort than the former, but it’s still quite easy. So, depending on how you want to do it, follow the instructions below.

Step 1: Payload Dumper Tool is a Python program, so the first step is to download and install Python on your system. The tool requires Python 3 or above, which can be downloaded from the official page.

When installing Python, make sure that it’s added to the PATH on your PC. For Windows PC, this could be easily done by checking the ‘Add Python to PATH’ option within the installer. For Linux/macOS, you can use the instructions provided on this page.

Step 2: Download the latest version of the Payload Dumper Tool on your PC from this link and extract its contents to a suitable location. Upon extracting you should have a new folder named “payload_dumper”.

Step 3: Now, download the full OTA ZIP package for your Android device. Extract the downloaded ZIP file to your PC using an archive tool (WinRAR, 7Zip, etc). The extracted contents will include the “Payload.bin” file, which is what you’d need to extract. Copy the Payload.bin file inside the “payload_dumper” folder.

Step 4: Open the command-line window on your PC in the ‘payload_dumper’ folder, where the tool and the payload.bin files are present. To do this

Step 5: In order to use the tool on your PC, you must first install ‘Protobuf‘ (Google’s data interchange format) which is basically a dependency. To install it, enter the following command.

The tool will now start extracting the individual partition images from the Payload.bin file. Once finished, you will find the extracted files inside the same “payload_dumper” folder. 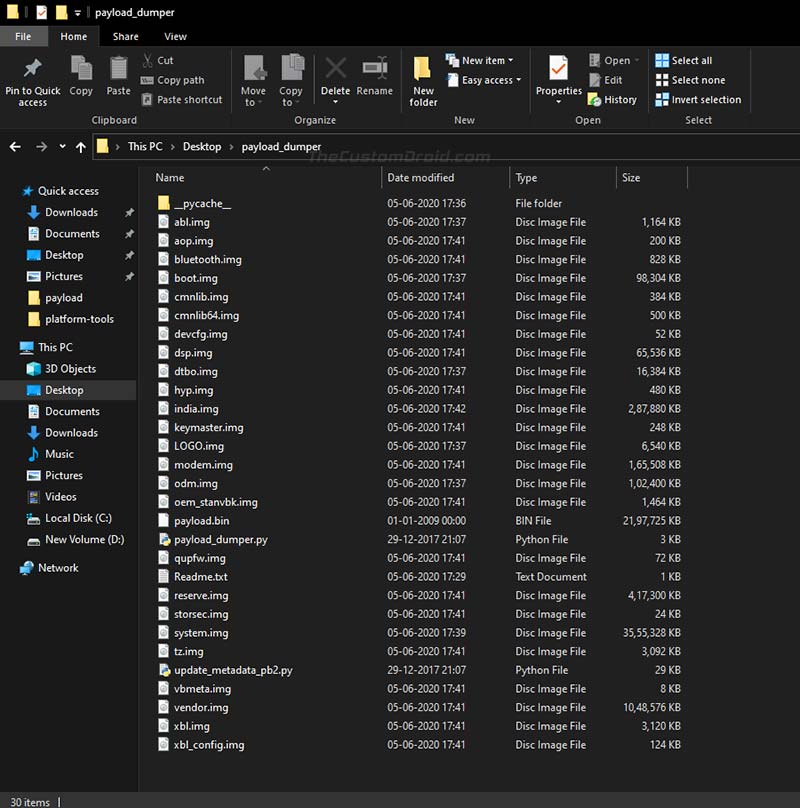 2. On an Android Device

Since Android uses the Linux kernel and so, you can use the Payload Dumper Tool to extract the Payload.bin on your Android device itself. The process is very similar to the one that’s followed on a PC but requires a few additional steps.

Step 1: Download the Payload Dumper Tool from here. Once downloaded, extract the contents of the ‘payload_dumper_tool_by_ius.zip’ file to the root of your phone’s internal storage. You could extract it anywhere, however, the root directory is more convenient.

The extracted ‘payload_dumper’ folder will contain the tool’s Python scripts as shown in the figure below. 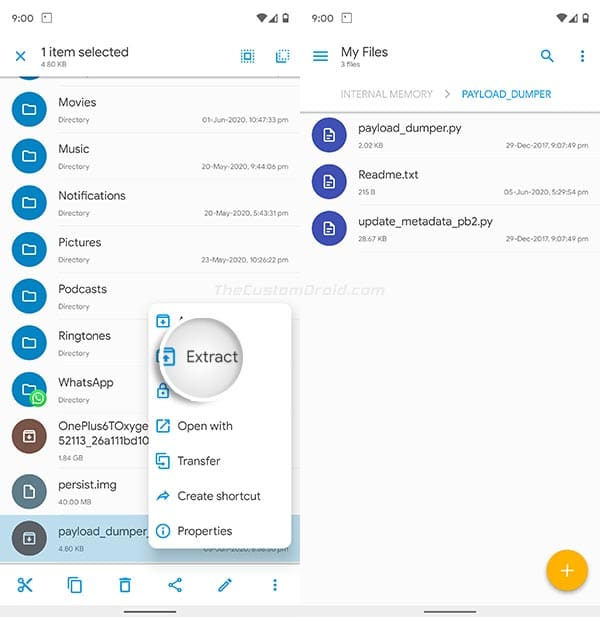 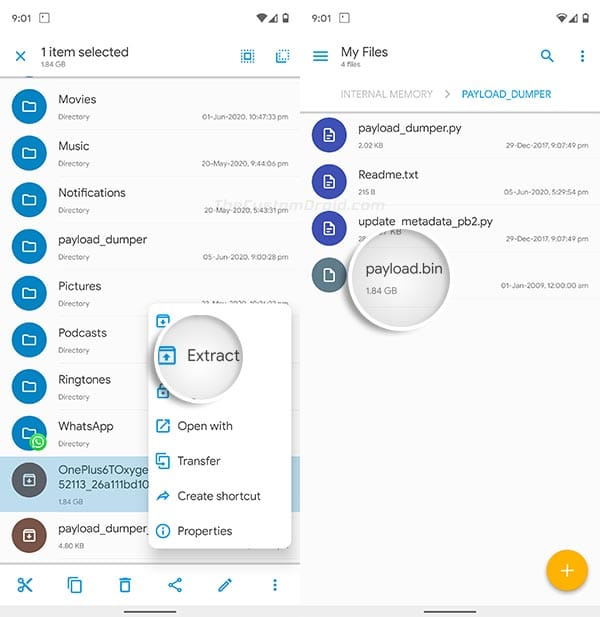 Step 3: Download and install the ‘Termux‘ app (a Terminal Emulator) on your Android device. Once installed, launch the app from your phone’s app drawer.

Step 4: To use the tool, you must first install and set up Python on your Android device. To do this, enter the following commands in Termux one after the other:

These commands will basically configure Python, upgrade its native package manager (pip), install the required ‘Protobuf’ dependency, and also upgrade all other program packages on your Android device. 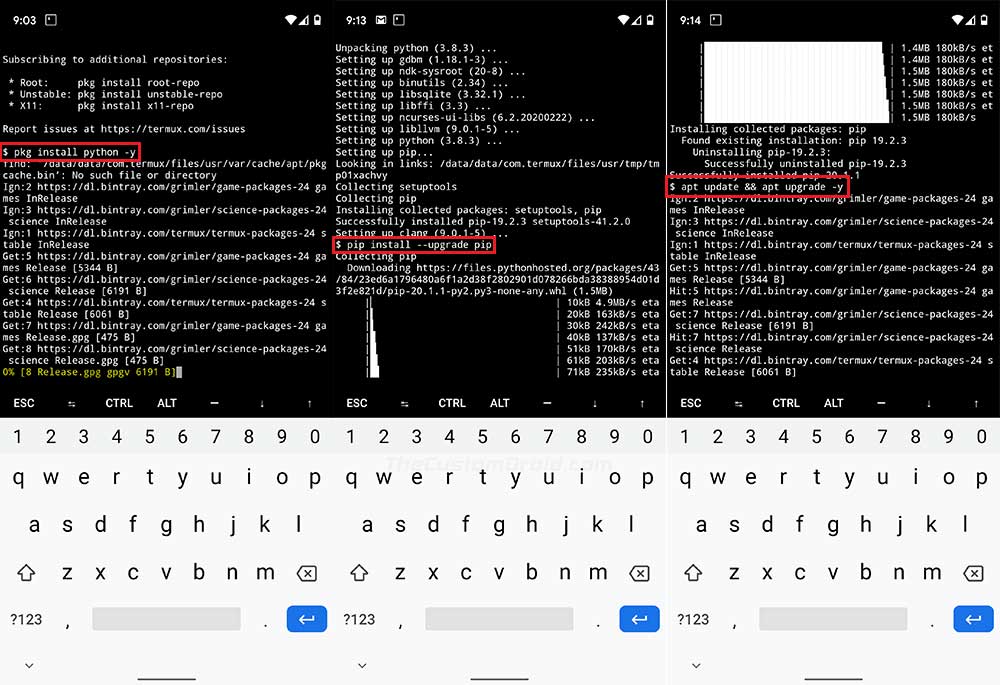 Step 5: Now, use the following command to grant storage permissions to ‘Termux’:

As soon as you enter the command, you’ll see a prompt to “Allow Termux to access photos, media and files on your device”.  Simply press “Allow” to grant the permissions.

At this point, you have your Android device completely ready to use Python programs (The Payload Dumper Tool in this case).

Step 6: Change Termux’s directory to the “payload_dumper” folder using the following command, provided that you have the folder placed on the root of your phone’s internal storage.

Step 7: Finally, enter the following command in Termux to extract the Android OTA Payload.bin bile on your Android device:

Once finished, the extracted firmware images will be placed inside the same ‘payload_dumper’ tool. 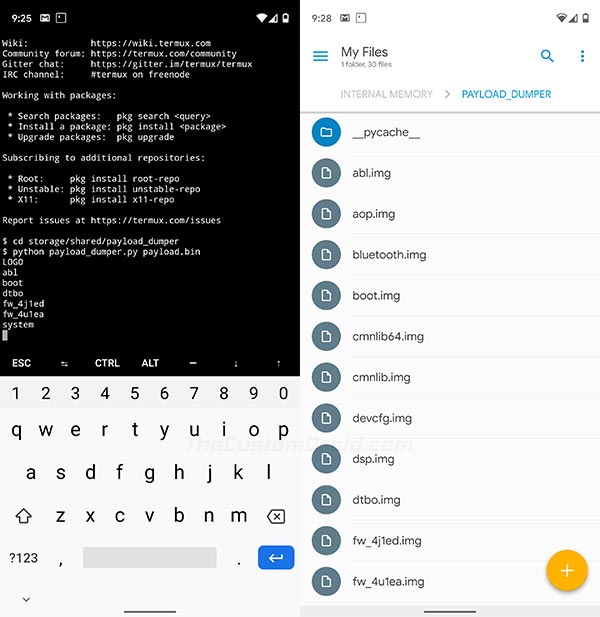 You can now copy these files and flash them manually on your device using fastboot. You can even grab the stock boot image and patch it to install Magisk and root your Android device.

So there you go! You have just learned how to extract an Android OTA payload.bin file on a PC or on an Android device. If you have any questions or feel stuck anywhere while performing the instructions in this guide, then please do let us know.